Okay, I got pulled over again leaving Snake Alley Criterium, driving through Illinois to Davenport Iowa. I was on a two lane highway, driving 9 over. I immediately saw the trooper turn around and knew he was coming for me, even though the guy ahead of me just passed me and was going much faster. The weird thing is that he followed me for a couple miles before he turned on his lights.

I got my license and insurance card ready as he came up. He said something like, ” Good afternoon, how you doing today?” I responded, “Bad, really bad. You’re standing at my window.” He looked at my license and card and told me that I seemed like a nice enough guy and he was only going to give me a warning.

I was thinking, “great”. He then kind of stuck his head into the window and asked if there were only 3 people in the van. I said, “Yes, plus a dog”. He repeated, “Only 3?” Then Bill said yes. And Bill went on to explain we were just in a bike race in Burlington, blah, blah, blah.

Then it started. He asked Bill and Nick for their driver’s licenses. I thought that seemed really weird, but wasn’t about to argue with the guy. He told me I needed to come back to his patrol car for some reason I can’t quite remember. I said sure.

In the car, he proceeded to ask me tons of questions. Over and over again. Like, why we were driving from Burlington to Davenport? What were we doing in Burlington? I must of told him at least 5 times we were in a bicycle race and I broke my frame. He asked me the year of the van, which was printed right on the insurance card. During this whole time, he was running our license numbers through the computer. I asked him why and he said he was checking for warrants. I thought that was wrong, but still didn’t want to piss him off. I asked casually if that is normal, running the passenger license numbers and he said he just wanted to take care of any outstanding warrants up front.

Then he started all over. What we were doing in Iowa and why were we driving to the Quad Cities. I wanted to scream, “you need backup because you have NO memory.” Right in the middle of this he says, “And you are absolutely positive that you haven’t had anything to drink today?” I look at him kind of strangely, because he hadn’t asked me anything about drinking. Then he says, before I answer, “Because I smell alcohol on your breath.” I say back to him, “I’m absolutely positive that I have had something to drink today.” He then asks me why I hadn’t said that before. I told him he hadn’t asked. Then, being a little pissed off, I ask him if I should tell him what I had for breakfast too.

He isn’t too amused. He asked me exactly how much I had been drinking. I said less than one beer, over 2 hours earlier, when I was supposed to be winning a bicycle race. He goes on to explain that since I’d admitted to drinking, I needed to to a sobriety test. I think I laughed. I pictured myself outside, walking the line and was thinking what Bill and Nick were going to be thinking. But no, he does a little test with his finger, telling me to follow it with only my eyes, not moving my head. I think I do a perfect test, but no. He asked me if I have a medical condition or an astigmatism that could explain why my eyes would be jittery, exactly like they would if I were drunk. I said no.

So, he told me since I failed the first test, I would have to do a breathalyzer. He goes on to tell me that lots of alcohol is odorless and that I could have been drinking that all day. I laughed again, which didn’t seem to amuse the guy. He had just told me a few minutes earlier that he had smelled alcohol on my breath, the well trained hound he was.

So, he gets out this electronic machine and starts messing with it. I got a little more serious now. I’d always thought that if a cop asked me to do a breathalyzer test, I would demand a blood test. But, since I had zero percent chance of having an issue, I was going along with it. He told me to blow in the straw for three seconds continuously. I told him I wanted to look at the machine before I did it. That pissed him off. I told him I wanted him to reset it to zero and let me watch. He reluctantly did so. I blew in the straw for the 3 seconds and then he says, “exactly what I thought.” I’m thinking, “shit”. I was thinking he thought I was drunk. He showed me the result. 0.000. Boy, his keen sense of smell was much better than the machine.

Anyway, he goes ahead and writes me a warning for a 64 in a 55 and doesn’t seem to be interested in me anymore. I wanted to ask him if he had a glove and wanted to do a body cavity search, but didn’t have the guts. So, I get our licenses back and ask for my insurance card and he tells me he already gave it back to me. I tell him he didn’t and he gives me the, “I did too look.” So, another insurance card in the hands of the authorities. That is 3 in less than a month. I’m not sure what they do with them. Maybe it is some deal they have going, see who can collect the most insurance cards in a month. I don’t know.

Getting back to the van, Bill and Nick said they were getting worried. It was close to 30 minutes. I told them the whole story.

So, after asking around, I guess it is the van. A big Ford van is the ride of choice for drug and illegal alien transporting I guess. But, the weird thing is that it is pretty obvious after they stop me that neither of those things are occurring.

If the officer wouldn’t have stated up front that he was just going to give me a warning, then I wouldn’t have let him do any of the other intrusive, semi-legal things. Like checking Bill and Nick’s licenses and giving me an alcohol-breath test. But, he had the speeding ticket hanging there, so that allowed him to keep going. It is bullshit. I can’t imagine how I would have felt if I was a black or Hispanic guy in the same situation. Probably scared to death. I wasn’t the least be nervous or concerned. I am more now, but when it was happening, it seemed more interesting than scary.

I’ve had this van for 2 1/2 years now and only this year am I having trouble. I’m not sure how to fix the problem. I’m pretty sure I would have been pulled over if I was driving 55. Any ideas? 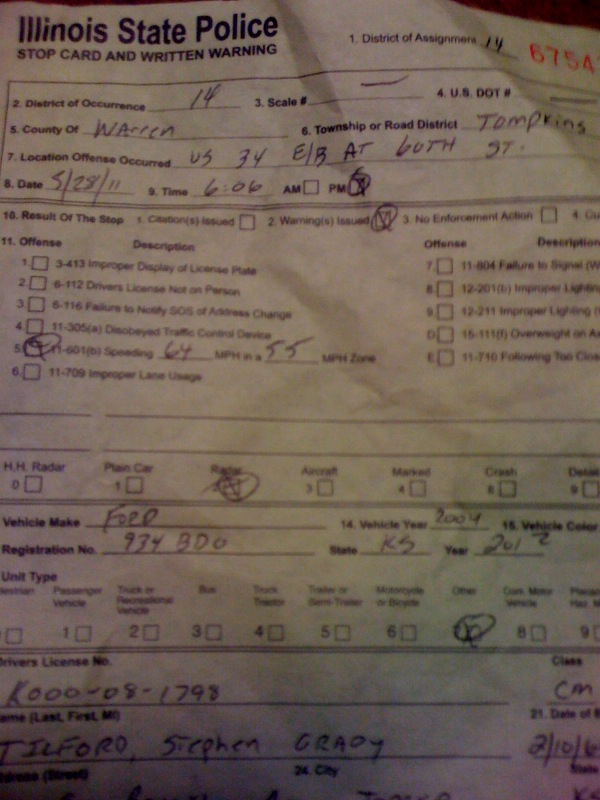 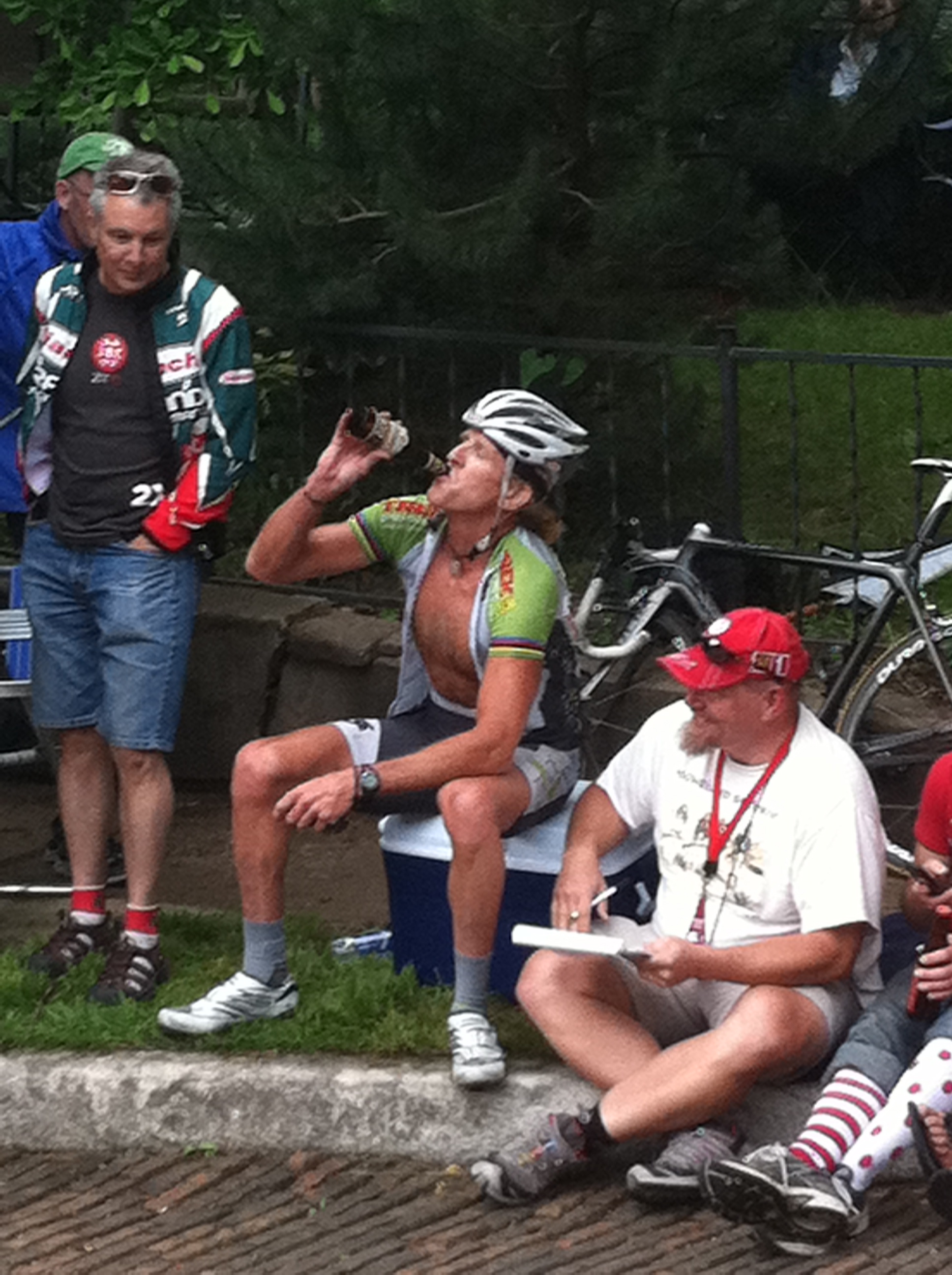 Another shot of the actual consumption of the alcohol.