This sport is fickle. Probably because the human mind and body are involved. I’ve never had the ability to know or manipulate my body into a peak. I think you can convince yourself, mentally, that you are physically prepared, but I truly think that is a mental peak and may or may not be a physical peak. But, it really doesn’t matter. If you think you are peaking, most likely your performance will go with that thought.

I was hoping I was riding better this past weekend. And I was. Much better than I have for a while. But, I was missing just that much to leave me at a mental deficient. That makes for apprehensive bike racing, which has never worked out too good for me.

Sunday at Muscintine, I was better than mediocre. The finish is 75 meters after a sharp corner at the top of a 300 meter climb. I have the sprint down. I’ve done it a ton of times. But, being apprehensive, I hesitated at the very bottom of the hill for just a second and could never make up the 4 bike lengths I lost. I probably should have finished 4th instead of 6th, but that isn’t important. It was depressing having the most of the physical ability needed, but missing the opportunity because of a mental screw up.

Monday, at Rock Island, was completely different. Super early in the race, a group went up the road with Brian in the break. I followed the counter attacks and next thing I know I’m off the front in a group of 6. That group morphed into nearly 20 guys eventually. The day was hot, in the 90’s, and I wasn’t too confident that I was going to be dependable in that move. I was trying to conserve as much energy and stay under the limit as much as possible. The group kept splitting with the exact right combination of teams represented in each split. I couldn’t cover each split, so was thinking I was picking the right guys to monitor. I wasn’t. I was picking the wrong guys because the guys I was watching were going way better than me. So, I was gassed, just for a short moment, and ended back in the field after 30 minutes. I can count on one hand how many times I’ve been dropped out of a break. Never one that large. I rarely finish out of the money. Maybe one or two races a year, not counting NRC stage races. But, here I did. And, I wasn’t riding bad. Really the opposite, I was riding the best I have for months. How wrong is that?

I guess what I’m getting at here is that it is super important to try to maximize you results for your ability. I didn’t come close to that. None of us on the TradeWind Energy Team did this past weekend, which is super freaky. A few years back, we won 3 out of 4 of the days, with Brian winning in Burlington and Quad Cities and me winning Snake Alley. Neither of us was riding as good as we were then, but we weren’t off that much. It was more a mental thing, which might be more frustrating that lacking the physical ability. 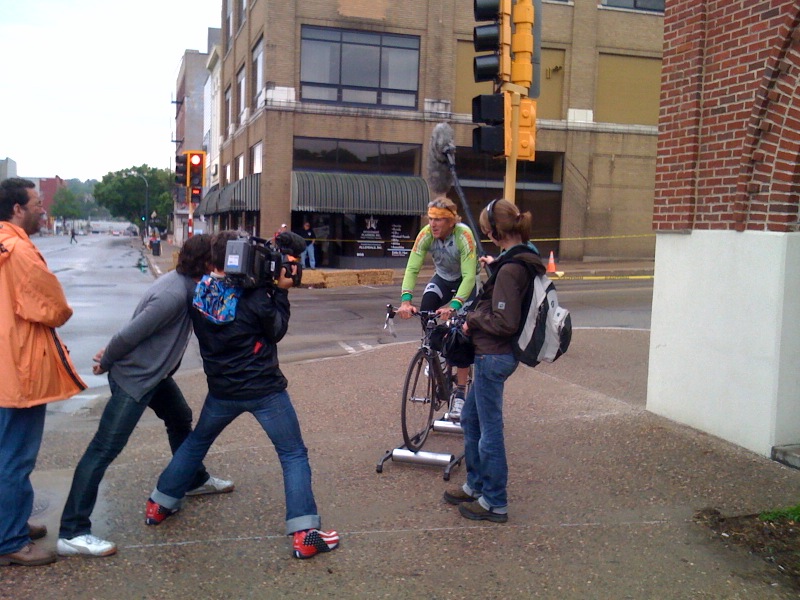 Doing an interview for German TV before the start of Snake Alley. They took Amtrak from LA to Chicago and were driving the route backwards and doing a story at each train stop.

3 thoughts on “Cycling is Fickle”