A friend of mine, Adam Gatewood, sent me a couple links to YouTube videos on the 1982 British Milk Race. It was kind of strange because I had just seen the finish banner from the final stage in Blackpool, in my basement, that Andy Hampsten and I stole, in a drucken state, in the wee hours of the night after the final stage. And, I was thinking about Alexi and his comeback and our experiences there.

The first time I rode the race I was on a team with lots of good riders. Andy Hampsten, Alexi Grewal, Chris Carmichael, Matt Eaton, Steve Speaks and myself made up the United States National Team in 1983. In 1985, it was Roy Knickman, Jeff Pierce, Andy Paulin, Ranjeet Grewal, Tom Resh, and myself.

The race was dominated for years by riders from the Eastern Block. The USSR guys won the race for awhile. Many of those guys would of given Hinault and Co. a run for their money at the Tour in those years, if they would have been given a chance. Greg Lemond could barely man handle them at the Coor’s Classic when they came to play.

I have millions of stories from my time in England. I could do a month of posts on them.

One that comes to mind was one of Alexi’s shining moments. The British “Pros” had a hit squad at the race. All the best British riders on one team, lead by Malcolm Elliot. Anyway, there was this guy, Steve Jones, who was pretty arrogant at the time. (I’m sure he’s a nice guy by now.) We were climbing one of the steep hills, up by Wales, and he and Alexi somehow got into a yelling match.

I was all the way across the road, but since we were climbing so slow, there wasn’t much wind noise. The spat finally got down to something about “fucking Americans”. Finally, after a few back and forth exchances, Steve Jones calls Alexi a “sand nigger”. I couldn’t believe it. But, Alexi took it in stride and immediately responded something to the effect of “you should be thanking us. Without us, you’d all be Fuckin’ Nazis.”

I think Jones might of taken an ineffective swing at Alexi, but Matt Eaton, who was on my side of the road, but farther back, had already thrown a full water bottle that hit Steve Jones squarely on the side of his head. It was funnier than shit.

Matt Eaton went on to win the race. It was the biggest stage race victory of any American up until that time. 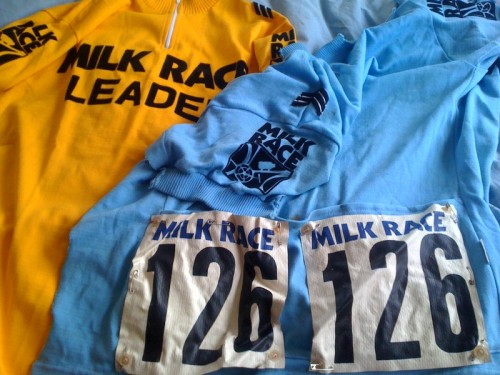 I wore the leaders jersey and had the sprint jersey cut off my body after hitting a stopped car at 100kph. 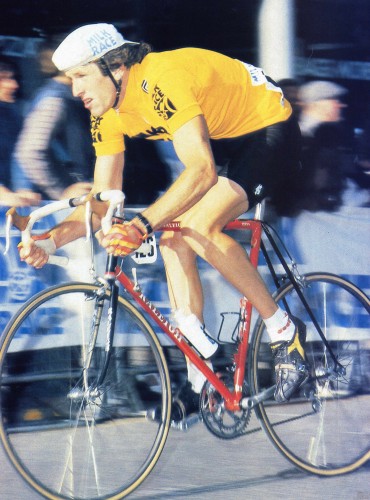 In the leader's jersey in '85 before crashing. 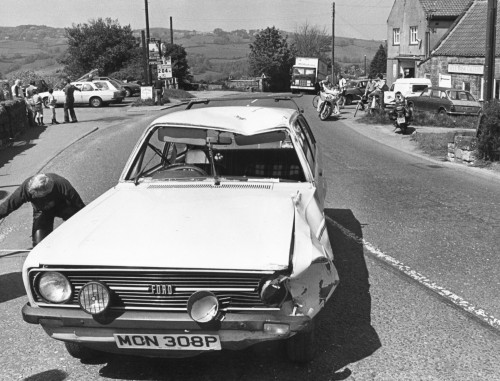 Photo of the car Andy Paulin and I destroyed at 60 mph. 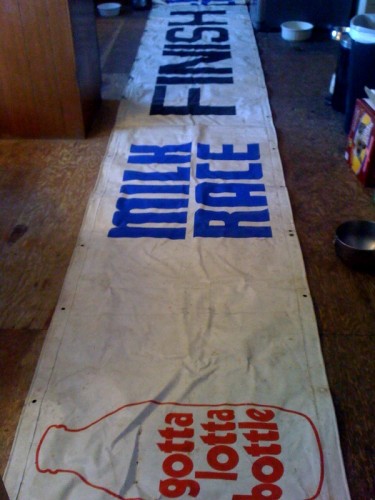 Sorry Phil, bet you wondered where that banner went. 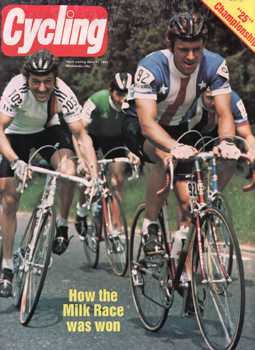 If you have some extra time sometime, here is some old Milk Race footage. This is only Part 1 from 1982. You can click on Youtube and see Part 2 if you’re a glutton for punishment.

9 thoughts on “The British Milk Race”