USAC just released this. These guys are idiots. Complete idiots. (And Nick, feel free to detail on all the examples you have of when a radio saved you from being in “imminent danger” during a bicycle race on the comment section below.)

Race Radios to be permitted again in NRC competition

(March 11, 2011) — After gathering input from U.S. teams, riders, organizers, officials and other stakeholders, USA Cycling has determined that teams will be allowed to once again use race radios in National Racing Calendar (NRC) competition and at the USA Cycling professional and elite road national championship events.

Following international precedent in 2010, USA Cycling banned the use of race radios in national-level events with subsequent plans for evaluation on all aspects of that decision at the end of the year. After review, the U.S. Professional Racing Organization board of trustees recommended lifting the radio ban.

“As we approached the 12 month anniversary of the radio ban in domestic races, we listened to input from the various affected stakeholders including officials, race directors, team directors and riders,” said USA Cycling CEO Steve Johnson. “In the process, we considered all of the categories of the racing environment that are impacted by radios including rider and spectator safety, caravan and peloton management and team/rider communication, frankly, radios won on every count.”

“The vast majority of athletes, teams and event managers agree that safety cannot be compromised, and that progressive sports use more communications technology, not less,” stated Bob Stapleton, owner of HTC-Highroad professional cycling team and USA Cycling board of directors USPRO representative. “The goal is to make cycling both safe and exciting and to ultimately bring the audience further into the action.”

“The decision was made because we believe race radios bring a unique level of strategy that is good for cycling, provide for innovation opportunities with our broadcast partners, and gives everyone in the peloton an additional safety measure,” stated USA Cycling board of directors President and USPRO representative Bill Peterson. “We have spent considerable time discussing this issue with many experienced racers, team managers, and race organizers; we have yet to find anyone make a convincing case to eliminate race radios. Therefore we are allowing radios within the races we control, and I suspect many countries around the world will follow our lead.”

“We’ve based our decision on several factors including the nature of racing in the United States and the inherent safety and liability issues that we feel are extremely important,” explained professional cyclist and U.S.P.R.O. board of trustees athlete representative Nick Reistad. “In my own cycling career, I can detail examples where race radios were critical in relaying information regarding safety hazards, including emergency vehicles traveling backwards on the course, which could have put my life, and the lives of those racing with me, in imminent danger.” 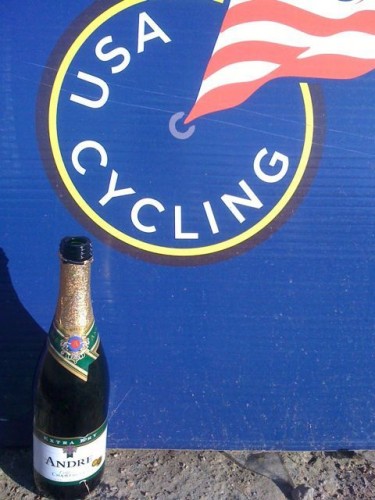 The drink of choice for USAC board meetings-cheap Champagne.

4 thoughts on “Anybody see this yet? Radios Okay in USA.”