Sunday morning at home. That isn’t normal, but it’s nice. It is weird racing Friday and Saturday and then coming back on Sunday, which now seems like Monday. There was a $1000 to be had Friday night at the Rut and Guts X in Tulsa. Driving to Wafflehouse to eat at 11pm., we had that in our van. But, it took 3 of us to win it.

Friday’s course was good and super challenging. There isn’t much more exciting racing that cyclocross at night under the lights on a challenging course. The problem was that we didn’t have the “proper” equipment to race it. It was super rocky with goatheads. I flatted a Dugast tire and Challenge Griffo warming up. Plus, two clinchers. I knew that was a bad omen. Anyway, Catherine and Bill both won their respective races. Catherine was challenged early, but won convincingly. Bill decided to cherry pick the master’s race for $300. He opened a big led early, then flatted. He only brought one bike, so I lowered the seat on my bike and he rode it one lap while I changed his wheel. He was still in the lead and won easily.

My race didn’t go so well. I am feeling just so, so. The start was pretty stupid short and then technical. They called a bunch of Oklahoma guys up to the line. I got up to 8th or so early, but by the time I got to the front, Brian Fawley was gone. Well, maybe not gone, but not catchable by me. I put in a big effort to chase him and was losing time, so I decided to try to get some composure back and ride smooth. That was working. I was holding Fawley close to even and gaining on the guys behind me. Then I flatted. Way on the back side. I had to ride a long way on a flat in loose dusty rock. I almost got to the pit still in 2nd, but the pit was stupid. It was more like a detour. Anyway, I came back out in 7th. I managed to ride back up to the group going for 3rd. Shad Smith, KCCX, had fallen earlier and was back up front. He bridged up to Jonny Sundt and they were riding 15 seconds ahead of me and two other guys. I kept augering the pedal of my Trek on the U-turns. It was really jacking me up. Anyway, I finished 5th on another front flat, 3 seconds out of 2nd. I was toasted at the finish. Shad ended up finishing 2nd, which was great. Jonny was 3rd. Then Raymond Hall and me.

Getting to the course on Sunday, it looks much more like a cyclocross course instead of the technical aspect of the MTB like race the night before. It was going to be hot. Close to 90. I didn’t have much motivation for that. Catherine and I rode one lap of the course an hour before her race and when we finished, we had maybe 20 goatheads in each tire. She flatted both her Dugast tires riding one lap. I flatted another clincher. So, she decided not to race. I saw a couple guys changing their tubes and they said they just went to the bike shop and bought slime tubes. I jumped on my bike and rode to Lee’s Cyclery, in downtown Tulsa and bought a couple, plus a can of Vittoria fix-a-flat.

I got back to the race 15 minutes before Catherine was supposed to start and changed the tubes, while she entered. She was having a pretty good day and rode away from the field early and never looked back. Two wins in one weekend was good for her morale.

Bill decided to man up and race the PRO 1-2 race. It didn’t work out. He flatted the slime tubes he’d put in. Along with just about everyone else in the race except Brian Fawley. I think Brian was riding Tufo Flexus with a bunch of Stan’s in them. That would have been the setup. I’m not going to race in Oklahoma again without that. I flatted about the 3rd lap when I was in 2nd. I rode back up to a group, but Jonny Sundt and already recovered from his first lap flat and was gone. I was pretty hot by then. Jeff Winker, KCCX, was riding alone in 3rd and I was riding with Jason Wadell. Jason soon flatted, so I was riding around alone. They made the race way too long. I think the finish time was nearly 1 hour 10 minutes. At that temperature, it was wrong. Tom Price, KCCX, was making a charge up through the field and was right behind me with two laps to go. I sat up and waited for him since I’d been observing how much faster he was going than me. I sat on him 1/2 a lap and then he flatted. So, I was alone again. I finished 4th, just a stone’s throw ahead of Raymond Hall.

So, the weekend was a success other than flatting $500 worth of Dugast tires. I’m not crippled. I didn’t cramp. I have just okay form. I did get a bullshit speeding ticket in some small town in Southern Kansas last night though. We got back early enough last night to meet up with Keith and have dinner at the local brew pub in Topeka.

Guess I should go ride. 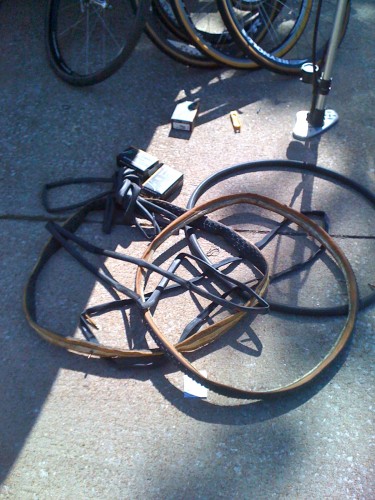 This was just after the tame first day. 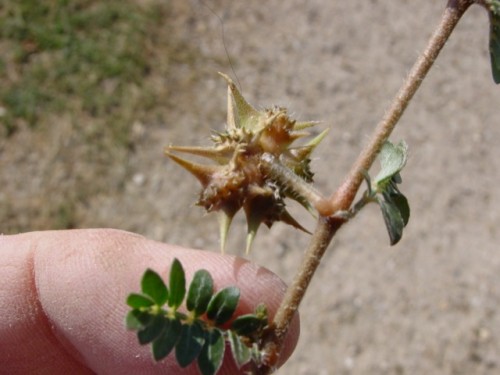 For those of you who don't know what a goathead is. 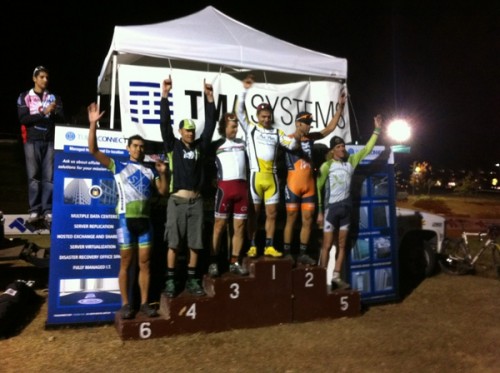 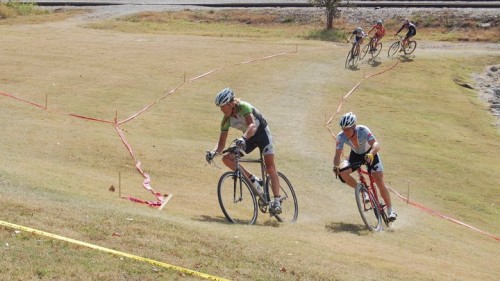 Riding with Jason Waddell early in the race. 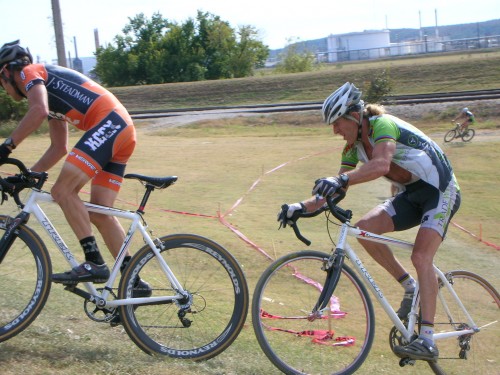 Me following Tom Price for 1/2 a lap. 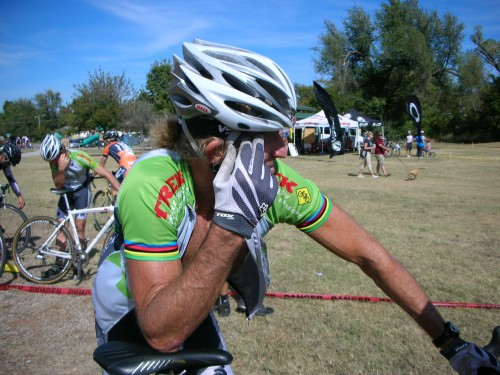 Bill and I using the same pre-race rest form. 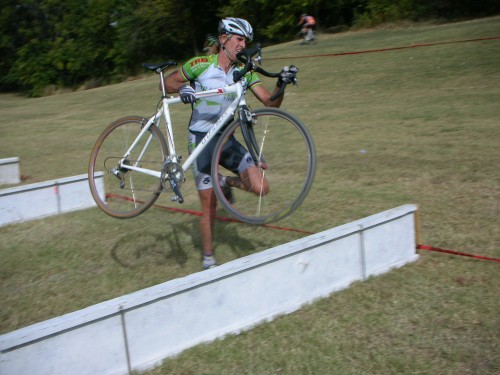 Can't say much about the form above.

5 thoughts on “Crossin’/Flattin’ in OK”