We went through Kansas City yesterday and watched most of the Banff Mountain Festival. I would of loved to have stayed and watched all of the films, but by 6 pm we had to take off. We still had 9 more hours to drive up to Cable. The drive went pretty good. Bill and I hit a pretty crazy lightening storm driving through Iowa. We stopped for java and didn’t really run out of juice until we were nearly to Hayward.

We were crawling into bed at 3:30 am. The temperature in the Kansas Garage was in the mid 50’s. And it was much colder than that outside. That was a 50 degree temperature change from when I rode on Sunday on gravel. It feels really cold. I brought some Smartwool socks and one warm jacket. Not enough.

Bromont was crazy and had to get outside and run at the crack of dawn. It’s now 11 am and I have only seen him maybe 10 minutes all morning. Anyway, when I dragged out of bed at 9:30 am, I dug out my pile jacket (that I’ll be wearing for the next week straight) and walked over to Dennis’ house. I stuck my hand into one of the pockets and there was an unfamiliar wad of something. I pull it out and it’s was a pile of money. I thought, “sweet”. It was big. I started flipping through the money, thinking it was a fortune, but it turned out to be only one dollar bills.

You could torture me for days and I could never come up with an explanation why I would have a wad of 41 one dollar bills in my pocket. It might of been left over from my pole dancing gig last winter. But if that was the case, there would of been some 5’s and 10’s in there too since I’m such a great dancer. Anyway, one of the best things about losing your mind are these small discoveries that will forever remain mysteries. 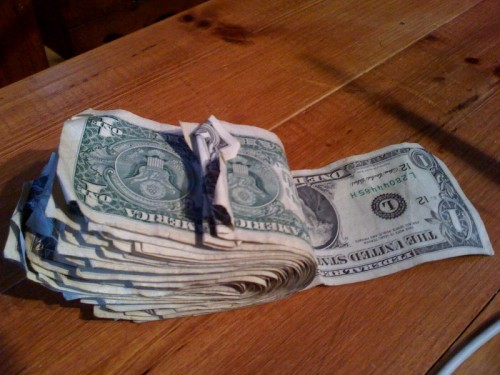 5 thoughts on “It’s cold up in them there woods….”