A lot of guys came up to me at St. Louis and started talking to me about the post about HVAC/heating making people fat/skinny, from a while back. It sort of amazes me how many people are really interested in the topic. The movie “Super Size Me” came up in conversation more than once.

First of all, it was totally unfair to McDonald’s. The movie was about gluttony, plain and simple. I’ll challenge any person to try to eat those quantities of calories and not do serious damage to their system. And you can eat anything you want. As healthy as you like. You just have to overeat by nearly 4000 calories a day. That would be more than double, maybe triple, your caloric intake a day, for a month straight. Or around 3 weeks, if you’re the guy from the movie. Can you imagine having to eat Thanksgiving dinner 3 times a day for 3 weeks. And that might not be enough eating to satisfy the amount you need to eat to gain weight like the guy in the movie. He gained over a pound of fat a day. Overeating is not good for you. It is that simple. Overeating 3 meals a day is really bad. It is that simple.

But, eating at McDonalds 3 meals a day, for a month wouldn’t necessarily be that bad for you. Even if you did it like the rules of the movie, minus the overeating part. If you just ate everything on the menu in rotation, but with normal caloric intake, you would be fine. I eat at McDonalds a fair amount. When I’m racing, I probably eat breakfast at McDonalds at least 20% of the time. The main reason is a time consideration. When there is no time consideration, I go elsewhere. But McDonalds does has a predictable menu for breakfast. I order hotcakes only and a side of scrambled eggs. Sometimes I get milk, sometimes hot tea. That is it. It works.

I ate breakfast at McDonalds virtually everyday last winter when I was roofing my building. That was for two months straight. I was there at 6 am, with all the old guys in farmer’s ball caps, drinking their senior coffee. I usually got hotcakes, but when it was going to be cold out and I knew I wasn’t going to be eating lunch ’til late, I’d order the whole big breakfast with hotcakes. Originally I was giving the sausage to Bromont, but eventually I ended up eating everything they gave me. Including what they call hash browns. I didn’t even like them-not the taste nor the consistency, but I ate them anyway. And I lost nearly 10 pounds during that time. Eating nearly the worst food I’d eaten since I was a teenager, I lost more than a healthy amount of weight. I know that wasn’t the reason for the weight loss, but you can’t say that eating out at a fast food place makes you obese.

Now, the only time I eat at McDonalds, other than breakfast, is when I’m driving home late and Bromont wants for a plain hamburger. He gets a plain hamburger and I do sometimes. And sometimes a chocolate sundae, sans nuts. And hot tea usually. There is no doubt about it that the food tastes good, but I just don’t eat it much. Other than McDonalds, I have no idea what the other hamburger/fast food places serve, so I don’t really have much of an opinion about them.

I’ve seen some pretty great cyclists eat a horrible diet and have stellar results. Don Myrah for example. When he was beating up all the MTB riders and winning Cyclo-X Nationals, he ate food that would make the guy from Super Size Me looks like his vegan girlfriend. I saw him and his brother polish off a 9 X 13 cake pan of layer bars. You know the things with a graham cracker crust, with chocolate and butterscotch chips covered in sweeten milk and coconut and then baked. They fill you up like cheese cake. If I eat more than a couple small pieces I feel like shit. And they ate 1/2 a pan each and were still moving normally. And that was normal for them. And he rode great.

So, back to the theme. The movie was unjust. And you get fat when you eat too much. By too much I mean too many calories. As cyclist, we get to eat a ton of food. That is a definite plus. But, we also need some more vitamins and minerals. But, not as many as you think. So, we can indulge ourselves, on a daily basis, if desired, with whatever extra calories we want. As long as you eat a basic healthy diet for starters, don’t worry so much about the content of the extra. But, make sure it isn’t just extra. That is what is going to make you fat. 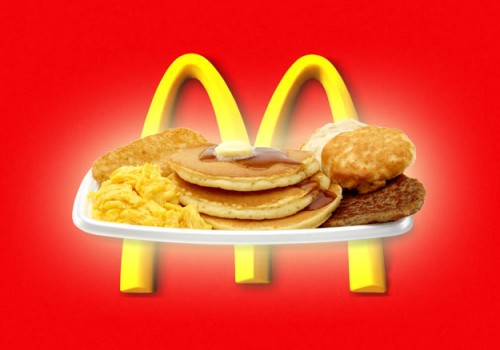 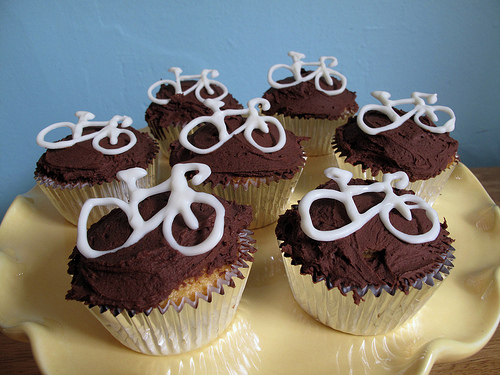 Eat too many of these and you'll end up looking like the guy below. 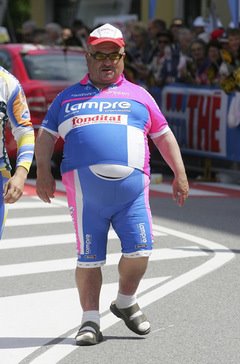 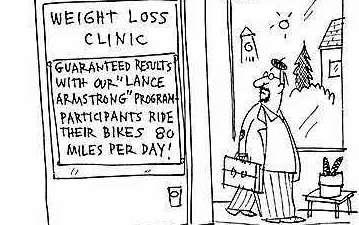