Like I said on the last post, the new course at Glencoe is very hard. Pre-riding the course it doesn’t seem that hard, but there are a few technical corners that strings the fields out and makes it a challenging course. There are 8 corners on the course with a tricky sharp corner at the bottom of a slight hill and an off camber dip going into the hill, which makes that corner tricky also. The wind wasn’t a big factor, but it was windy enough to make it harder. The temperature during my race was near 90 and muggy, but it cooled off some for the PRO race. I didn’t see a race that a break didn’t win. That is a pretty good indication the course helps makes the selection. I like races like these because you can’t let you guard down or you miss the move.

I didn’t realize that I hadn’t raced for nearly 5 weeks until the day of the race. I knew I hadn’t done any intensity, but thought I’d be alright. And I was just barely, just alright. There were a little over a 100 guys in the 1/2 race. I was planning on seeing how I felt and then race accordingly. I stayed in the top 20 most of the race. When the field started splitting early, I made the initial split, but when the final break of 4 rode away, I saw it going and made a conscious decision not to go. For one, I didn’t think 4 guys was enough and two, I didn’t want to have to go that hard for the whole race. After a couple laps, two more guys bridged up to the front 4 and that was all she wrote. I wasn’t as concerned as I normally would have been. I was there mainly for training. There was plenty of training to be had. Some stupid crashes split up the field a few times. And it was always pretty hard going up the climb.

The break stayed away by a little over a minute and Mike Sherer, Verizon U25 won over Andrew Crater, AeroCat. Back in the field, with about a 1/2 lap to go, there was a crash pretty close to the front of the field, maybe 10 guys back. The majority of the field was gapped behind it. I was in front of the crash, but could only manage 5th in the group, which put me in 11th place. I don’t really have much to say about that result. If I would have won, I probably wouldn’t have anything more to say. It is frustrating not being in complete control of your destiny in a criterium, but it is nice that fitness can return pretty quickly during the season.

The Professional race was a much better event. To watch at least. I talked to a bunch of different friends that were racing and told them not to drift too far back in the field, because it was ugly at the back. I think that was the case. The attrition was pretty great. I think there were nearly 100 starters in the PRO race and 39 officially finished. It never looked easy after the first 5 laps. No one looked comfortable. After about a 1/3 of the 50 laps a big group of maybe 14 guys got away. And they never got caught. Unitedhealthcare missed the move pretty much. I think they had one guy in the move, but he didn’t stay or dropped back to help chase. But, the break never really slowed down and the field never got organized even to make any dent into the 40 second lead.

Towards the end of the race it became pretty interesting. There were guys racing to win the race and then there were the American guys racing for the National Championship. I’m not sure what to think about the tactics these “Pro” teams use in most respects nowadays, but can’t applaud any one teams tactics, other than Bissell. I think everyone else needed their radios to get on the same page. I take that back. Maybe not Fly V. They really didn’t have an American that could normally win the event and they finished 3 in the top six. I haven’t really been following the NRC Series, but this result had to have been beneficial to their cause. (Fly V might be going PRO TOUR for 2011.)

But, every other team that was in contention, other than Bissell, needs to realize that they are there for one reason. To win a National Championships jersey. That is the priority. By miles. Winning the race is 2nd. Kelley Benefit’s didn’t make that their priority. Jelly Belly maybe blew it worse than Unitedhealthcare. They should have put some guys in the rotation with Unitedhealthcare and Kenda to catch the group sprinting for the Jersey. They didn’t and came up 5 seconds short. That was not good, to say the least.

Like I said, Unitedhealthcare raced a horrible race considering they had a pretty good criterium lineup. They never had anyone in contention to win the race or win the jersey. And they killed all their guys trying to chase down the break. I think Karl Menzies was their best finisher back in the teens.

David Veilleux, Kelley Benefit’s, and Bernie Sulzberger, Fly V, were away racing for the win. Both not Americans. I far as I could tell, Suzberger never took a pull the last 8 laps and Veilleux beat him handily in the sprint. That was pretty impression on its own.

In the race for the Jersey, I was rooting for Ken Hansen, Team Type 1, but was betting that Daniel Holloway, Bissell, was going to win the race of the Americans. I’d never seen Holloway before the Elite Criterium Nationals back in 2007. He made a big impression that day and I’ve had the pleasure to get schooled by him a few more times since. He is very fast. Hansen is fast too, but Holloway didn’t do nearly as much work in the break. Ken was doing a ton of work in the move. All the way up until the end.

Holloway got the jump into the final corner, about 200 meters from the finish. Headwind. He had a good two bikes lengths on Hansen coming out of the corner. I don’t know the margin at the finish, but from my perspective, Hansen made up a bunch of ground. Just not enough. They both rode pretty impressive races. Too bad it was a winner takes all situation.

I think the move over to Glencoe might work out pretty good in the long run. There weren’t nearly as many spectators here as in Downer’s Grove, but it has good potential. And I think the course is a much better course for the National Championships. Now all we have to do is get USA Cycling to bring the Elite and Women’s National Championships back here. 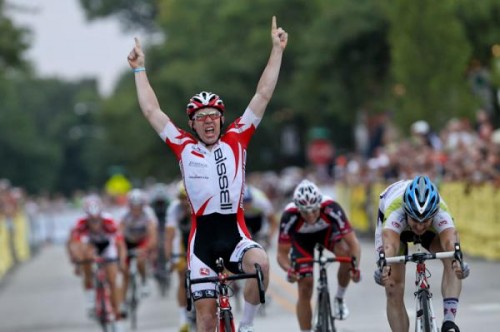 Photo shows it all. 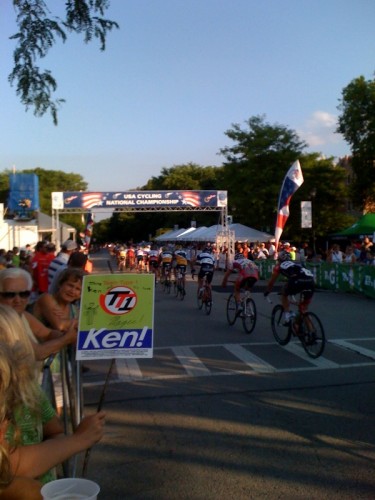 Picture of the break from behind. Ken Hansen's little sister is next to me holding the sign. 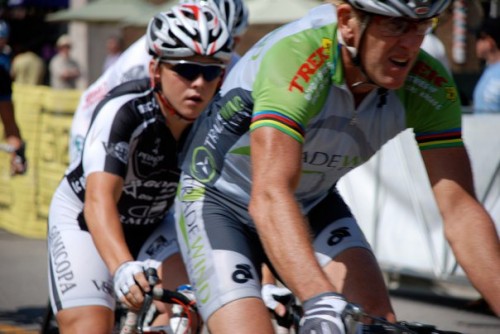 Not feeling any better than I look. 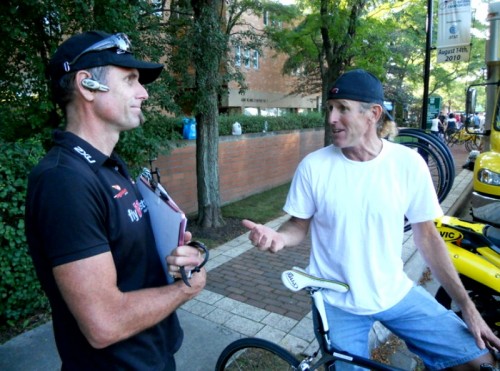 Talking to Ed Beamon, Fly V, during the Pro event. Now that the riders don't wear radios, there isn't much for him to do during the race.