I hadn’t spoken to Cadel Evans in a while. Maybe not since he had started riding on the road. That is probably right. I can’t imagine where I would have run into him. But, my short term memory is suspect sometimes nowadays, so I wouldn’t swear to it. Anyway, I got a chance to catch up with him a little bit right after the final stage and then again longer at the BMC party in Paris.

We used to race MTB together. Well, he raced for Cannondale and I mainly for Specialized, but we did a lot of the same events. He rode on the Saeco development team to train for MTB and eventually just switched over to the road when the MTB scene started going south. He obviously made the transition pretty well.

Anyway, it great to see him having a crazy great year after winning the World Road Championships last year. Maybe that got a monkey off of his back. I don’t know. But, he has won a classic this year, has won both the yellow and pink jerseys at the Tour and Giro and has represented the World Stripes better than most any rider I can think of recent history. That is doing this all on a new/start-up Continental Team. It isn’t your typically Continental Team, but that is their assigned status.

It was interesting to me listening what seemed important to him now. Like I said, it had been a long time. I can tell he is obviously most proud of the World Championship victory. He lives less than 5 km from the course.

Anyway, the racing in Europe seems to be a bit more wide open now that it seems to be less “super charged”. If Cadel can just tweek a few things, probably most mentally, in my opinion, then he is going to win a Grand Tour pretty soon. That would probably get another monkey off his back. 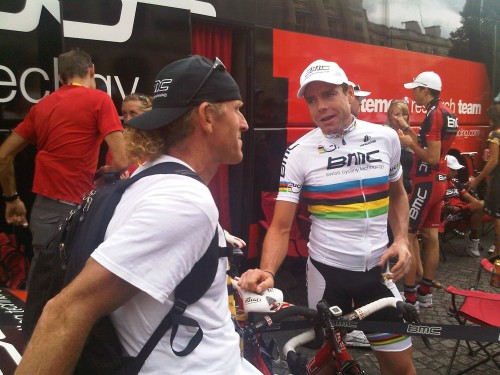