I generally like the way Andy Schleck rides. And I enjoy reading what he write about the sport. And I really liked the way he dressed for the unveiling of this year’s Tour’s route. But, I didn’t much like the quote he said today after the stage-

“And I know that my mother is watching the race. I know that she walks into the kitchen and paces back and forth. I told Bjarne on the top to call my brother and say that I wouldn’t take any risks in the descent.”

I was hoping Cadel had a good Tour for obvious reasons. It doesn’t seem like the media have made enough of a big deal out of Cadel’s broken elbow, but that is just part of the race. I’m not a Contador fan, so that left Andy Schleck. I can’t be for anyone that would say something that basic and childish. All he had to do is coast down a long dry descent. I don’t want to see a winner of the Tour de France that worries about such basic technique. It should come 2nd nature to him. He should know how to descend. And descend fast. That is one thing a professional stage race rider should be able to do. And do it well. Without even thinking of taking risks.

So, looking through the top ten currently on GC, I don’t see anyone that I am partial towards. I guess I’ll just enjoy watching the race without any favorite. The team classification is really close. Maybe I’ll focus on that. 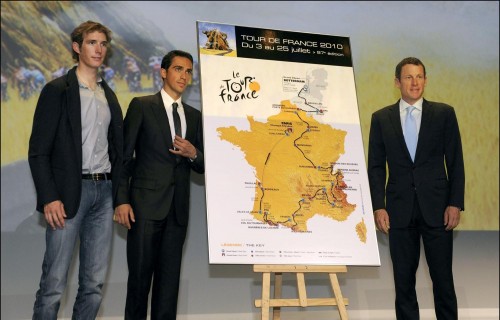 11 thoughts on “Andy Schleck today at the Tour”