Sunday’s race was not that hard. Mainly because the course is so hard that if you raced it hard, it would be carnage. It’s a really short criterium on a hill. 1:10 minutes a lap. No rest really. Up and the instantly back up. It was hot again. Not super hot, but hot.

Our agenda was to win the overall first and then the stage. And I thought that probably was going to be done simultaneously. All four of us on TradeWind Energy/ The Trek Stores team had a mathematical chance to win. But, really Bill and Nick had the best shot, even though Brian was virtually winning the race only 2 points behind Brad Huff.

We were going to race aggressively at the start until the right situation occurred. I rode a few laps off the front alone early. Then Bill a bit. It was obvious that Brad wasn’t going to let Brian ride away, even though he did put the hurt on Brad a few times, Brad would always come back. Then Nick went away with Jeff Hartman, Big Shark, and that was it. That was a scenario that was considered before the race and it seemed good. They lapped us super fast. In the meantime, Brian was still trying to shell Brad. But, no.

The race kept splitting up like crazy. It was nearly impossible to figure out who was going off the front and who was getting lapped. Brian and Brad went off the front, got together, decided not to go and came back to the field and right off the back to the next group. During that, Hartman had jumped and Nick followed so they were off the front again. At the end, Nick was sprinting Jeff in a big group, with Brad Huff leading out Jeff and Brian helping Nick. Nick won the sprint and the race, so he won the race overall.

Brian has won the Tour of Kansas City four times. It was nice to help Nick get a victory. He hasn’t been racing very long, but seems to be improving in leaps and bounds. Jeff Hartman seemed to be disappointed afterwards for some reason. We only had 4 guys at the race, but for some reason he thought we rode negative, I guess. Brian had ridden with him pretty long on Saturday, before shelling him, allowing him to get 2nd. And Sunday, we allowed him to ride with Nick and get 2nd again. I’m not sure what he was expecting.

And Brad was disappointed that Brian wouldn’t ride with him. From my perspective, Brad should of pulled when he was alone with Brian. Brian would of most likely beaten him if Brad pulled the whole race, but at least he would of finished 3rd overall and top 5 in the race. Both these guys were at the race alone. It is obviously going to be frustrating in that situation. 4 against a lot of individual good riders is pretty good odds for us. But, that is just bike racing.

I was better than I expected, but really pretty bad all weekend. I’ve had some lung crud going on and a really sore throat. I’m not much on not racing when I am sick. I’ve done that a million times and I don’t seem to get better any faster. I usually just ride through it. It is much harder, especially mentally, when it is so hot and I feel so shitty. I don’t have a spleen and usually get ill when I run into just about anyone else that is already sick. I’m not sure how to avoid that. But, it makes it so much better and I appreciate it so much more when I’m going good, remembering how bad it feels when you’re going bad. It is pretty frustrating, getting sick after Joe Martin, then finally, after going out to altitude, feeling great, for just a couple days, and now back to square one. But, that is life. 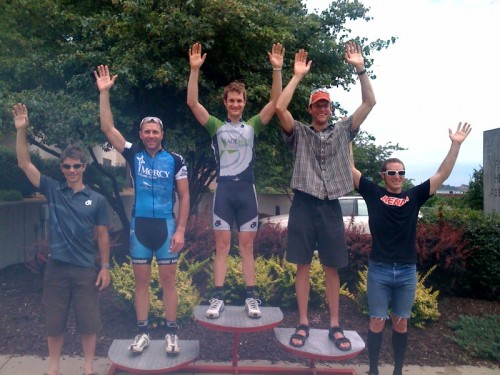 A pretty eclectic taste in podium fashion. I guess that is how we do it in KC. 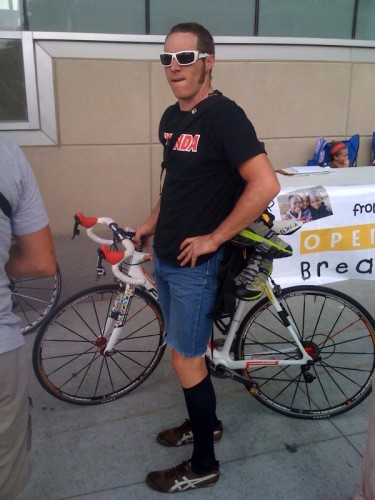 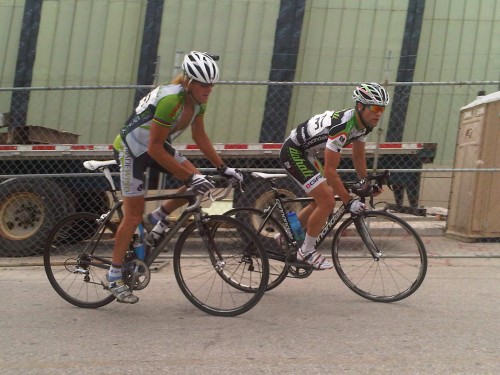 Phil Mann and me up on the top of the hill. Notice the camera on my helmet. I video taped the last two races. Now I just need to edit it down to a viewable length. 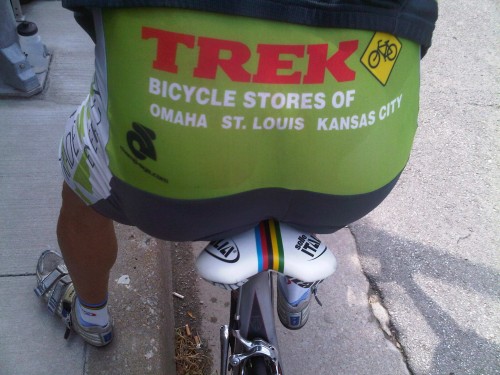 Better seat photo than yesterday. It's the first carbon railed seat I've ridden. Still on the fence. Guess the shorts are alittle see-through.