Not much to report here. The race started at 8:30 pm. It was much more humid than the night before. The course is a little less than a mile with a small climb on the backside. The Sound Pony bar is here and it is a fun part of the course- dark, a bunch of loud, drunk fans. Plus, they have a jumbotron(sp?) TV set up to watch the whole lap. It is pretty cool having cameras on every corner. Every race is available for watching at Tulsatough.com.

Like I said, not much to report. Only one move stayed away for any duration. 10 guys that seemed like the right mix. We had Nick Coil. Brad Huff from Jelly Belly was driving it. But, Hotel San Jose didn’t think their two riders there were right. So, they put all their guys up front and chased. I don’t get it. They have been at the front at both races so far, driving it. And for what? I have had real mediocre places here and only 1 rider on their team has placed ahead of me on either day. That should be embarrassing for them. Especially when taking their tactics into consideration.

Chis Hall, Tradewind Energy, won the $500 crowd prime, which was surprising. He made a good move going into the final corner and soloed to the line.

I missed the carnage at the top of the hill with a half lap to go. The road goes from a super wide street to a narrow two lane. I felt the guys coming around my right and knew they were going to hit the curb. So I moved over to the slow inside and avoided a huge pile up. Adam Bergman destroyed his bike. I had to scrub a ton of speed. So, I chased all the way down the hill into the final corner and decided to just keep going. I took it on the outside and just dieseled to the finish. I passed 5 or 6 guys and ended up 10th. I was in the wind the whole was the lady 60 meters I can’t win this stage in a field sprint. But, I can finish way better than 10th. But, not under those circumstances, riding like I am.

Today we race at 4:30 over on a bluff by the river. It is the hardest race of the weekend. A hard climb and a tricky , off camber downhill corner 200 meters from the finish. And it us windy today. Should be a race for the strong guys. I don’t know if I qualify for that today. I guess I’ll see. 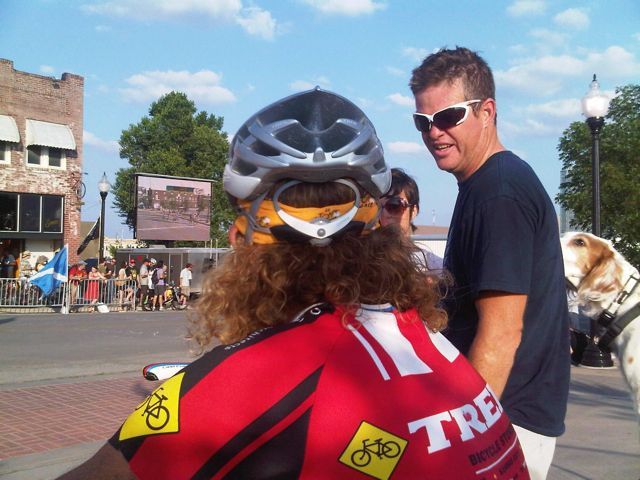 Talking to Josh, co-owner of the Sound Pony, with big TV in the background.

One thought on “Tulsa Tough Day 2”