A lot of people tell me that they think it is strange that I’m from Topeka, Kansas. Or just from Kansas at all. I hadn’t really ever thought about it one way or another. I don’t really think people think much about where they are from. It’s just a fact. I lived in Boulder for a while, San Diego for a bit, but was mainly on the road. I thought that paying rent 365 days a year when I was there 60 seemed like a waste of money. Plus, Kansas has a lot going for it. Kansas is centrally located, the weather is usually conducive for riding and the roads are great and empty. The airport isn’t far and it is super affordable. Pretty good for cycling in general.

But I hear, “you have to live in Kansas”. Or, “oh, you’re from Kansas? I’m sorry.” I have to admit that it is “backwards” in many ways compared to California, Colorado and many other places. I don’t agree with much of the politics. But, I think my biggest personal complaint is the lack of awesome produce/grocery stores and restaurants. But, that is petty really.

Anyway, where I was trying to go with this is that the City of Topeka officially/unofficially changed its name to Google for the month of March. Google is taking applications from cities to become a test area for super high speed internet access. Something like 100X faster than currently available. I’m all for that. I think that it would be great for the city. Even though Topeka is the capital of Kansas, it doesn’t have a lot going for it to attract economic development. This would help a lot.

I have nothing against Google. I own some of their stock. But, it seems kind of demeaning changing the name of the city to the name of a company. I’m not sure why. When I’m watching the weather/news and they replace the name Topeka with the word Google on the weather maps, it looks ridiculous. Beyond ridiculous. But, I guess if it helps at all getting chosen by Google, then I’ll let it slide. But, if they say that we have to change the name permanently, then I’ll have to put my foot down. Well, unless they provide the service, city wide, for free. Then it just becomes a name, right? 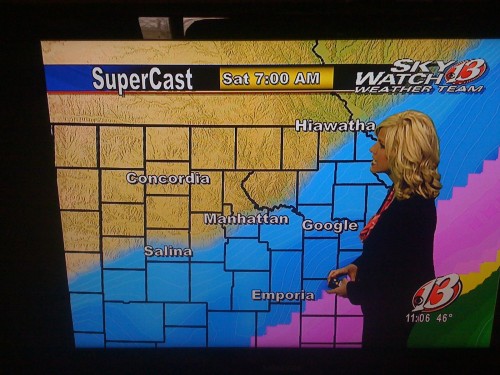 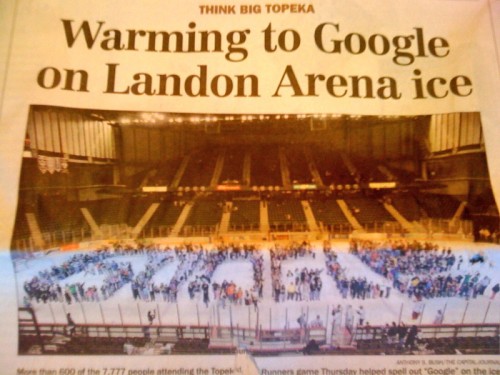 Even at the hockey game last night they are Google crazy.

2 thoughts on “I’m from Google”