I’ve raced only 5 times this year and I can barely stand the thought of eating another Gu, Cliffshot, PowerGel or bag of Sport Beans. And all the other stuff that you are supposed to consume while racing. I usually don’t get sick of this stuff until mid Summer. I’m not sure what the deal is now. Maybe I’ve just eaten the maximum amount that a person can stomach during a lifetime already. I kind of hope so and hope not at the same time. Whatever the reason, I’m going to start carrying some real food with me during the races.

I remember when Brian Maxwell and his wife would make Powerbars at night during the Coor’s race and bring them to the start of the stages the next morning for us personally. That was service. We were so into it because we didn’t have to carry over ripe bananas, Fig Newtons or bags of grapes anymore. I am partial to Powerbars because of my early experience with them.

I’ve never been much of a guy to drink much while riding. I’m not sure I’ve even finished one water bottle this season training. I truly mean that. I’m pretty sure I haven’t drank one bottle total in 3000 miles of riding this year. I did drink a couple bottles racing in Texas in February though. So, I don’t think I’ve hit my quota on Sports drinks yet. I’m sort of a Gatorade guy. But, that is just out of convenience. But, I really don’t care what is it in a bottle normally. I used to swear by Extran. I guess I still would. I should probably try to track some of it down here in the States.

For sure I’m going to always stick a couple gel packages in my pockets for longer races, but I’m also going to make it a point to eat some real food along the way. So, don’t be a wise-ass when you see me pull out a peanut butter sandwich in the middle of a road race and enjoy some real food. 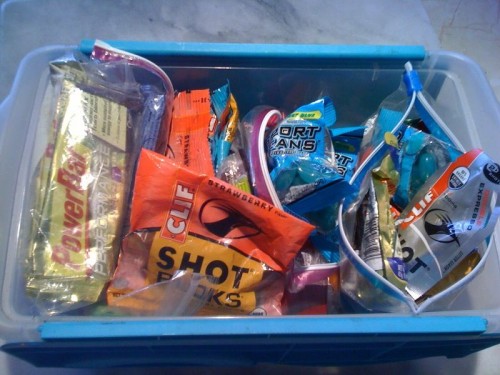 I'd like to throw this box away with the radio box. 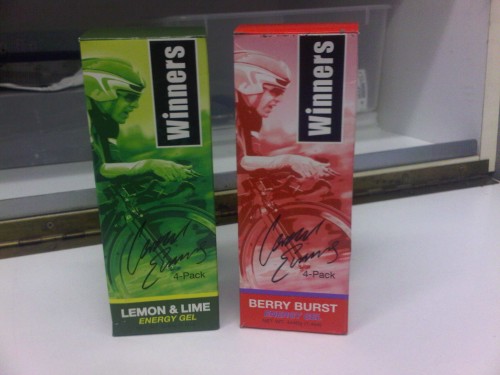 Cadel's signature gels. Haven't tried them yet, but I'm not partial to fruit flavors.

4 thoughts on “I can barely stand it already.”