Today was the Walburg Road Race. I’ve done it a bunch before. Normally the race is always windy. It’s 3 laps of 24 plus miles. A few small hills. It finishes on a small hill. Today was different. Not different start time though. 5:30am wake-up. Got there pretty early and got in at least 2 miles of warm-up. I’m not sure what the deal with the officials here. There was a pre-race meeting right before the start and it was just a bunch of yelling and the word disqualification must of been screamed 10 times at least. I thought we all were working together to make bicycle racing fun and safe. That detracted from the fun factor for sure. Especially so early in the morning.

There wasn’t the past wind. It never got over 15mph. But, after about a half a lap it started drizzling and that continued throughout the day. I don’t have enough miles or intensity to do too much. I noticed that my jump was lacking all of the first lap. Team Hotel San Jose had a bunch of guys in the race. Maybe 10 out of 60. They didn’t seem to have much interest in racing aggressively. I didn’t really care. It got into the gutter a bit the first couple laps, but nothing serious.

Anyway, it was all together 1/2 through the last lap. I started getting my race legs somewhere around the same time. It kind of surprised me. I followed Heath Blackgrove a couple times and then Carlos Vargas. I didn’t have much desire to ride off the front. Plus, it was never going to work, so why put any energy into something with no chance to succeed.

With 8 miles or so to go, THSJ (Team Hotel San Jose) put all their riders at the front and started rotating. I got on the end of the train, which was Josh Carter’s wheel. He was riding far enough to the gutter that it wasn’t easy staying out of the wind. It didn’t seem like they were going very fast, but they were shelling guys right and left. I never looked back and didn’t realize that so many guys had been dropped. Kristian House made a solo move for a mile or so, but 8 guys rotating behind was not conducive for a solo move.

A couple miles out, Josh coasted for a second to stretch or something and I was nearly in the gravel to his right. I eased up a little and someone behind me was riding to my right. That was very surprising because I thought I was truely in the gutter. Anyway, I don’t know who it was, but he ran into my rear derailleur with his front wheel and bent it pretty good. We got hooked up for a second, but he didn’t fall. Pretty good bike handling on his part I’d think. Two guys went by me during this altercation. Only a 1km downhill and up 1 km to the finish. I was in the wind the whole time and knew I needed to start on Josh for the sprint.

When the hill started the last km, I made a move to move back up and my gears skipped pretty badly and shifted down a gear. In retrospect, I should of shifted by up, but obviously wasn’t thinking that great. With 500 meters to go I was done. I shifted up and was wondering why no one was going by. I looked over my shoulder and no one was there. There were only 6 of us left. Sean Sullivan peeled off and sat up, but I didn’t have much desire to go hard the last 100 meters for one place. I ended up 6th. Which was last in the group. If everything went perfect, I might of had a shot at 2nd, but I was never going to win this race in that scenario.
Josh won by miles. I had no expectations, which I never do this time of the year. So, 6th is okay. I’ve won these races and rode pretty pitiful at them. You just never know.

The race was good for me. Not super hard, but harder than anything I’d done for months. There was a ton of mud on the course from farm equipment, so there is a ton of cleaning equipment and clothing to be done. Not the easy, sunny Texas racing I was hoping for. We’re racing 80 miles tomorrow at Pace Bend Park. I was 3rd there last year and have won it before. Should be interesting. Probably a little more aggressive racing tomorrow I’d guess. We’ll see. 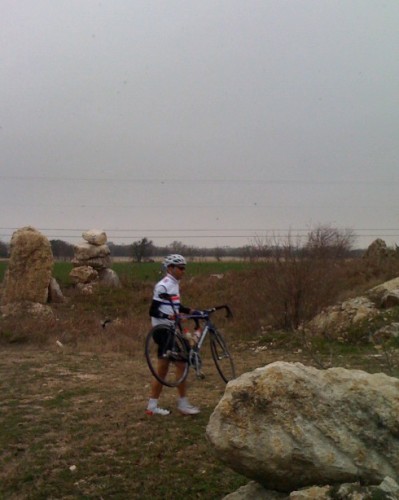 Christian House in an unflattering pose walking his bike through the goatheads wearing his British National Championship jersey. 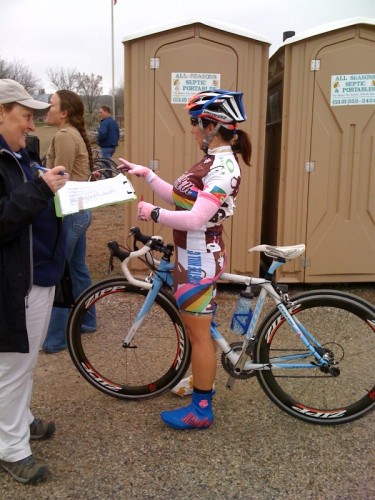