I had the worst riding day of the year.  It was completely unexpected.  I really hope it wasn’t because of the extreme heat and humid, because there is a lot of that yet to come!  The course was pretty interesting.  A bar bell shaped course with two short hills.  And two technical corners.  The field was pretty small, less than 50, but super high quality for a regional race.  And, the teams had pretty even distribution and strengths on paper.

I don’t have much to say.  Scott Monninger, who is just racing for pleasure it seems, showed up with a bunch of his Big Shark teammates. Scott took off pretty early on the 2nd lap or so.  His attacks have always been so subtle and smooth that no one seems to want to go with him.  I think a lot of the field didn’t even know it was him or that he was even in the race.  Anyway, I made a pretty big effort to “bridge” up to him.  It took me the better part of a lap, a couple minutes.  From then on I was pretty much useless.

I got a side ache.  Something like a runner’s stitch.  I don’t usually get those bike racing.  My breathing was horrible.  I couldn’t catch my breath.  The race was only an hour and I suffered the whole time.  It was like having  a super bad day on a MTB bike.  There was nearly no point on any lap that I felt recovered.   I have been riding pretty good for a while, so the pain in riding bad seems foreign.   Racing bikes when the pedals aren’t going over in any familiar or recognizable way is one of the most humbling and, for me, one of the most uncomfortable  things in life.  Something I try to avoid like the plague.  But, that isn’t the way life works.

So, anyway, we didn’t do very well, which was also surprising.  Scott ended up getting away with Alex Welch, Mercy.  Then Stefan Roth and Chad Cagle , also from Mercy, rode away.  Dan Schmatz, Big Shark, won the field sprint.  I ended up 8th.  Gassed.  Shad Smith was 7th and Chris Hall 10th.

I’m starting the race today with a completely empty stomach.  No food for 5-6 hours before the race.  Sometimes that works well in these extreme conditions, at least in my experiences in MTB racing.   And, that is what yesterday felt like to me. 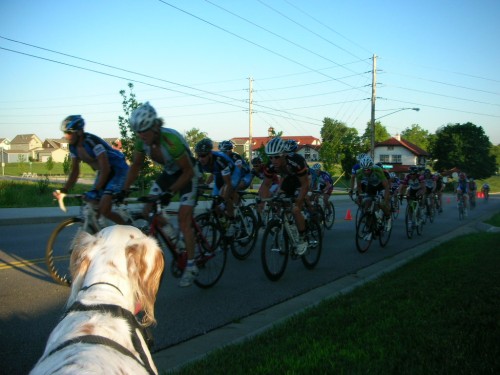