I was looking around the internet last night and saw this interview, by Neal Rogers, at Cyclingtips, with John Tomac.    I guess Neal did the interview last year at Ned and Todd’s Gran Fondo in Durango.  I went there and rode and talked to Johnny T. a little.  I hadn’t seen him in a long time and he hadn’t really changed at all, which is great.

The interview is pretty good.  John was always modest and talked more with his legs than his mouth.  And, in my opinion, he did that better than any rider I had the pleasure to race with. Sure there are some other guys who might compare with John, but when you throw both cross country racing and downhill together, he’s my pick.

I raced with John pretty much throughout his career.  I rarely beat him ever.  I beat him in a few Specialized Cactus Cup Fatboy races, but that was riding a tight criterium on mountain bikes. Off-road, he would kick my ass.  Especially if it had a technical downhill on the course.

I thought I was going to beat him at the Olympic Trials in Atlanta, in 1996, gaining a minute on him the on the first part of the last lap, but then it got to a big technical rock section and he rode away, leaving me to finish 2nd.

Anyway, John was, by far the best downhill rider of that time period.  By far.  If they wouldn’t have let any rider pre-ride a course and everyone just went down it once, first time, John would have won all the races.  Plus, John was racing the cross country races before the downhill usually.

At the World’s in Italy, Johnny T. had the first XTR setup I’d ever seen.  And I was riding for Shimano too.  I might be wrong, but I think it went from a 28 big cog in the back to 32.  Those 4 teeth allowed him to ride the steep walking section.  I remember seeing the race on TV afterward and at the start, there was a huge pack of 150 guys climbing, with Johnny T. already a 100 meters ahead by himself.  He won the World Championships handily that year.

Last year, in Durango, I was at the start of the ride and lined up next to John.  He looked over at my bike, which was an Eriksen.  It was 9 speed XTR, hardtail.  John looked over and saw my barends and said, “Barends, I need to get me some of those”.    He nearly always rode what he thought made sense and made him faster.

Anyway, if you have some time and want to learn a little about him, click the link above.   It is a good interview. 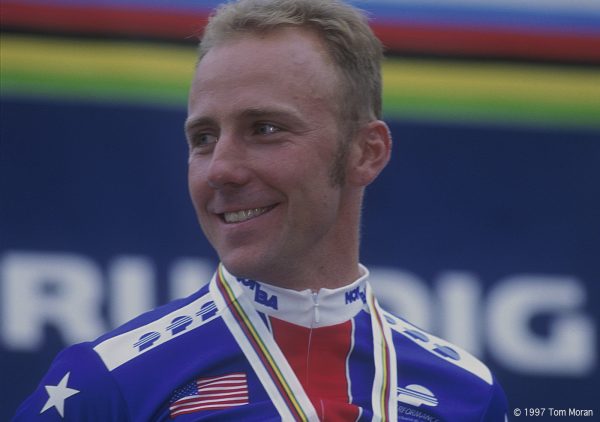 Photo, by my friend, Tom Moran.  The photographer of the first era of modern day MTB racing.