All my friends were up in Cable skiing between Christmas and New Years.  I’ve done that for a really long time.  I’ve only missed it a few times when I was hurt or because I felt I needed to train more for cyclocross Nationals in January.

I think cross country skiing is good for balancing a cyclist out.  We use the same muscles in such repetitions, that we get out of whack.  Skiing fixes that somewhat.  I’ve had some of my best early seasons after spending a few weeks skiing.

When I ski, I normally tend to ski a bunch.  Normally 2-3 hours at a time.  Cycling allows that.  Of course, the first few times I’m pretty wobbly after doing it.

I was thinking about this when I was riding yesterday.  It was kind of cold out and I felt like just tooling around.  I just rode over to Red Rocks again and looked at the city.  I started thinking about when I first learned to ski.

It was back in the early 90’s when I was first tried to skate ski.  I had traditional diagonal skis back when I was young.  Anyway, skate skiing was becoming the norm and all my friends up in Iowa were doing it.  Michael Fatka was selling skis at his shop and they were skiing a bunch.

I went up to Ames and started skiing with Michael and the other guys I rode with.  We were just skiing at a barely groomed park.  It was normally, Michael, Harold and me.  I wrote a post about Harold.

Anyway, we started driving up to Minneapolis and Wisconsin to ski on “real” ski trails.  It was a super cold winter and it was nearly always below 0 temperatures.  I never used any wax other than Start green then.

We finally decided to go to a race.  It was a marathon race up in Superior.  It was super cold, as usual.  We drove up there and waxed our skis the night before.  Start green.

The next morning, I think the race was supposed to start around nine in the morning.  But it was -10 or something.  We called the number on the entry and they said the race was postponed until noon.   Then they would decide if it was going to happen.

We called back at 11:30 and they said the race was happening at noon.  We jumped in my Isuzu and drove there.  We were barely dressed and it was still -5.  Right we we got out of the car and had our boots on, they blew off the gun.  We didn’t have our skis on and weren’t even at the course really.

So we ran over there, put our skis on and got going.  I passed a ton of guys early and when I got into the woods, I needed to look down to make sure I didn’t step on anyone’s skis or poles.  Even my own. But by doing that, my glasses crystallized up so I couldn’t see anything.  So I took my glasses off.

That was a mistake.  When I got towards the end of the first lap, out of three 15km laps, it got back into the open.  It was windy and cold.  My eyes started freezing together.  It was bad.  I had to look down again to stop my eyelids sticking together.

I skied by the parking lot and looked over to my car.  It had exhaust coming out of it, so it was running.  I thought, screw this, I’m not skiing 30 more kilometers with my eyelids frozen together.  So I skied over to the car and Michael was sitting there with the heater going.

I was pretty frozen.  I got into the car and gave Michael shit for not even starting.  After a couple more minutes, I was watching and Harold skied by.  Harold was a farmer and had frozen his face a few times.  Enough, that whenever his skin got cold, his face looked like he had extreme frostbite.

I sat in the car talking to Michael, feeling guilty I had stopped.  I sat there for another hour, thinking I should get out and ski the last lap with Harold.  So I got dressed and got waited for Harold to ski by.  I got out of the car, put on my skis and got going.

It took me a little while to catch Harold.  He skied pretty good.  He was surprised to hear my voice when I skied up behind him.  I just skied behind him, talking.

Harold kind of started bonking with about 1/2 a lap to go.  He was skiing slower and slower and told me he needed something to eat.  I told him I had a Powerbar in my jersey pocket.  He just stopped.

I took off my pole to reach into my pocket to get the Powerbar.  Then I attempted to unwrap it. He told me to just give it to him and that I should just keep skiing.  I said that would open it.  He went on to say that he was worried that I wasn’t going to become a good skier when I just skied with him when he was blown.

I was amazed, and still am, that was his concern.  He was more worried about my advancement in the sport of skiing than himself needing some assistance.   I finally opened the Powerbar and it was frozen like a rock.  I was still well below zero.

Harold’s hands were pretty done and he couldn’t really break a piece off, so I used my teeth to break up the Powerbar and give it to Harold to eat.  He ate most of it and then we skied to the finish together.

Harold was a genuine guy.  A farmer.  He died.  If you click on the link above, I wrote a little about it.  I miss the guy and think about him every time I ski up in Cable. 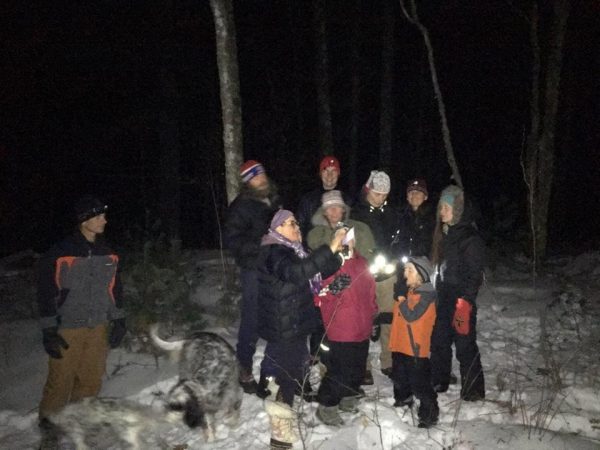 The gang on New Year’s Eve out in the forest. 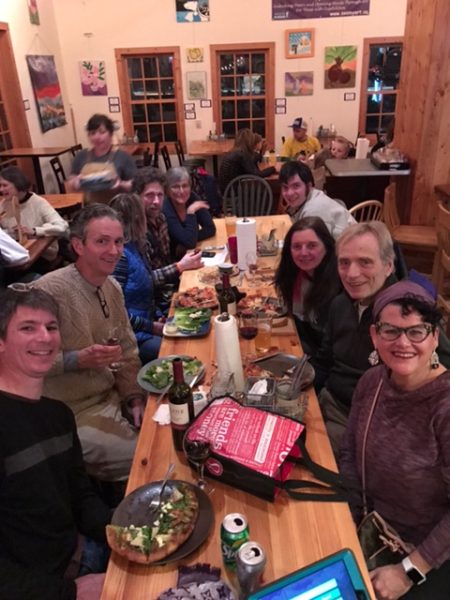 And at the River’s Eatery for pizza.

9 thoughts on “Thinking about Skiing”