Back when Greg was winning the Tour, after his gun shot episode, I used to ski with him some in the winter.  Not downhill, but nordic.  I think maybe the 5th or 6th time I had skied, I did the Double Birkie with Greg and his gang of bike racers that skied..  That was Tom Schuler, Jeff Bradley, Mike King and such.

The Double Birkie is normally the Saturday after Christmas and goes from Fish Hatchery up to Telemark and back.  It is around 90 km.  I could only V1 back then, still pretty much all I can do, but I had endurance.  It took all day and at the end I was good.

Flash forward a year and I am skiing better, by my standards.  I’d been skiing all the Christmas holiday season, up in Cable, and was looking for a race to do.  There was one in Minneapolis, on a golf course, the first week of January.  So we loaded up and went.  It is about 3 hours to Minneapolis from Cable, so we had to leave pretty early.

I was late, so barely got there in time to register, change cloths and get to the start line.  At the line, there was Greg, which surprised the shit out of me.  I had seen him the week before and he didn’t say anything about racing.

The race started and everyone was crazy, as usual.  Really close to the start, like just after a couple hundred meters or so, someone stepped on one of my skies and I fell forward.  I had some pretty expensive carbon fiber poles and I broke one as I fell.  But that wasn’t the worse part.

Some guy next to me, lost his balance and planted his pole directly into the side of my face and poked a hole in my cheek.  Like threw my cheek.  I just stayed on the ground as the race went by.  I got up, grabbed the broken end of my pole and skied off the course.

After a bit, I went into the clubhouse to change my clothes.  I was kind of in shell shock, not thinking the day was going to go like that.  And then Greg walks in and sees me.  He didn’t know I was at the race and he was super animated, as often he is.

He didn’t say a thing about the hole in my face.  He really wanted to  know if I was interested in staying around and playing ice hockey with him that night.

I wasn’t too happy and told him I was going to head back to Kansas.  He was persistent.   I told him that I didn’t have any hockey skates.  He instantly replied, “No problem, I’ll buy you some.”  He said something about it being a late Christmas present.  I told him that was super nice, but I had to head home, which I really didn’t have to.

Anyway, we talked a little and then I took off.  I don’t have that many regrets in my life.  And this barely qualifies for one, but if I had it to do again, I would stay and play ice hockey.  It would have been a life memory, which is what we’re all trying to collect.   Instead, I just get Greg wanting to buy me skates, which is fine too. 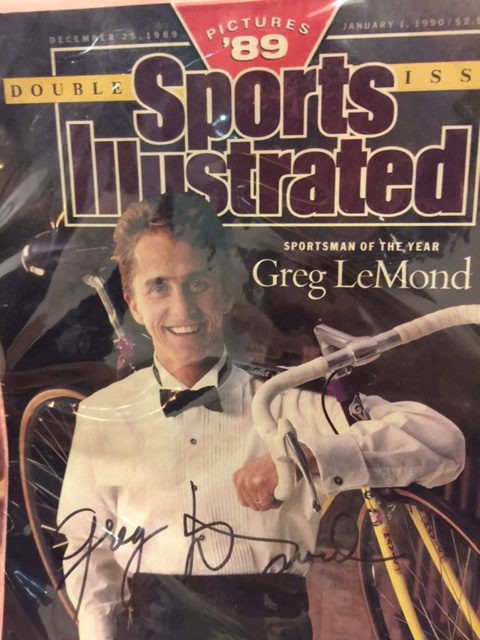 I thought of this story because Joe brought this to beer night last night. I guess he brought a signed Greg Lemond poster to the Christmas gift exchange and had this left over.

21 thoughts on “Greg Lemond trying to buy me Hockey Skates”