It is strange to think that it really isn’t that long ago when silent movies were just movies.   I say that knowing that it has been the better part of a century since they were the norm.

I’m interested in silent movies because that is where my grand parents, on my father’s side met, initially.  My grandfather played the violin and my grandmother the piano.  It seems strange that a relative that I grew up with did this early in their life

I saw an article that said that 70% of all silent movies are lost   That is amazing.  And sad.

I didn’t talk to my grandmother much about her experiences playing the piano.  I only heard her play it a few times.

One night, late, she came out of her bedroom in her nightgown.  She walked to the piano and sat down.   And she started playing wonderfully.  She did this for maybe 15 minutes, then stood up, without saying a word, and went back to bed.  She was in her 90’s by then, and I hadn’t seen her play for many, many years.   It was a great life memory for me.

Okay, I have a neurology appointment soon at KU med in Kansas City.  I have some questions, so I’m looking forward to it   Plus, my iPhone is fixed, so I need to go by the Apple Store and pick it up. 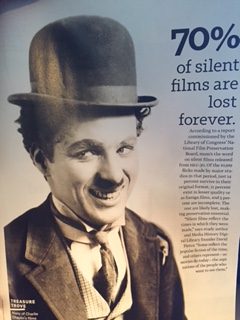