Yesterday Vincent had to take his van to the Mercedes dealer to get a new emissions sensor or something installed, so we just loaded up our bikes, dropped the van off and rode out to a trail head to meet a friend of Vincent’s from Denver.

As it turned out, it was over 15 miles of road riding to get to the trail.  I was pretty done from the nearly 60 miles from the day before, but it was supposed to be nearly 80 degrees and I was just tired.

Anyway, we met up with Dave, Vincent’s friend and headed out riding.  I was pretty toasted, like I said above, but we weren’t going all that fast, so it was alright.  I looked behind me and a guy was catching us from behind.  The rider was wearing a gear bag, had knee pads on and didn’t look like he should be riding our speeds.

We got up to a split in the trail and we stopped.  The guy passed us and I was thinking to myself that I was in pitiful shape.  Worse than I had imagined.  The guy was using plastic toeclips that didn’t have straps and rode by pretty quickly.

We kept going and ended up climbing a fair amount, too much for me.  Then a while later, we were stopped, trying to figure out how to get back and the guy comes riding back.  He stopped and said hi.

I looked at his bike and saw it had a battery on it.  I realized it was electric.  The guy’s name was Steve also, and he was super nice.  He explained that he was an old enduro motorcycle racer and had switched to bikes.  Then a couple years ago, he got hit by a woman in a car that was messing with her cell phone and was pretty jacked up.  Broken hip, knee, etc.

So he decided to try to get back into shape and picked an electric MTB to start.  He showed us how the bike worked and the different speeds it had.  I believe it had 4 settings and he said that when it was on the highest, it produced something like 250 watts.

He encouraged us to take it for a spin, so we all did.  It was crazy, like amazingly crazy.

It was a Bosch drive that only engaged when you pedaled.  But man, it engaged.  Like it was so fast and so easy to ride.  I was climbing a hill that would have been killing me just a little earlier and what was slowing me down was not being able to handle the bike because of too much speed, not effort.

Steve wasn’t too familiar with off-road riding, so he had a ton of pressure in his tires and the bike was set up a little strange, but all of us did that initially.

I didn’t really have any contact with this before yesterday.  My buddy, Jimmy Mac, had left being the guy in charge of MTB Action because he refused to add electric bikes to the publication.  It was an incredible stance to take.  I applaude him for it. I wrote a post about that and pretty much agreed with Mac at the time.  But now, I’m not so sure.

Steve needed an electric bike to get back to a point where he could ride “a real” bicycle.  It was allowing him the ability to get in some off-road miles while he was regaining strength from the car accident.

We went by McDowel Mountain Cycles and they had a couple electric bikes there.  But only for the road.  The trails in Fountain Hills don’t allow them.  So, the guys at the shop decided not to sell them when it goes against the rules of the trails.  I understand that completely.

But, I think there need to be some trails where guys like Steve can ride.  He was super nice, wasn’t tearing up the trail, super courteous to hikers and wasn’t doing anything different from what I was doing.  Just riding, enjoying the trails and the day.

But let me tell you, what an extra 250 watts can do for your speed on a mountain bike. 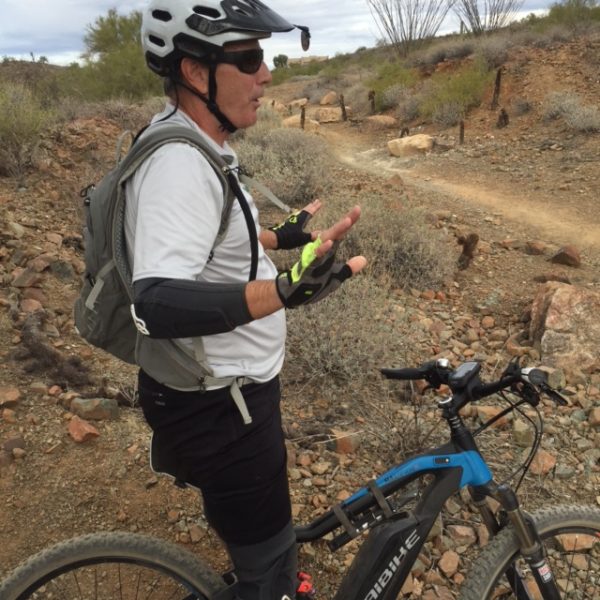 Steve explaining his path to riding an electric bike. 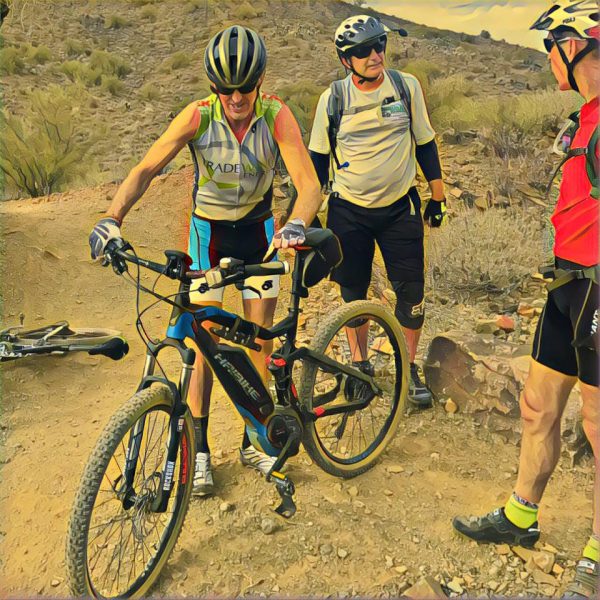 Vincent’s artsy photo of me about ready to take Steve’s bike out for a test ride. 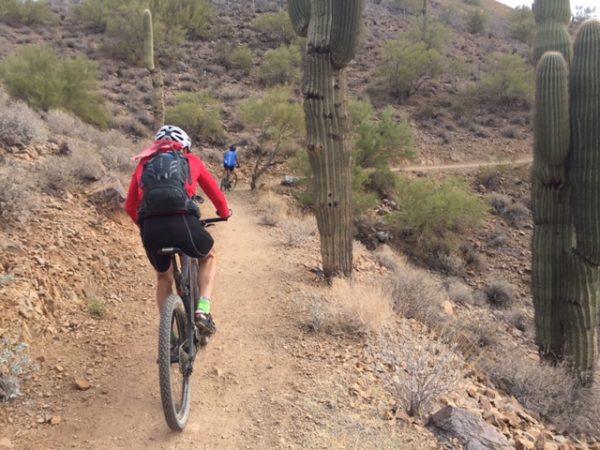 Dave, Vincent and I climbing up by the cactus. 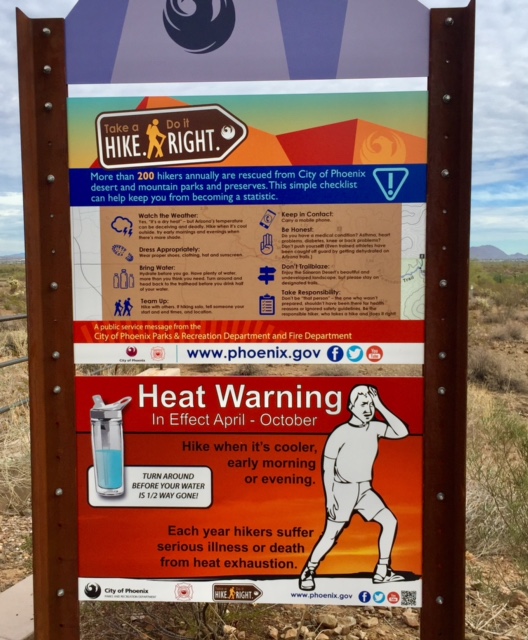 This sign was a little scary. The hot season seems a little long. 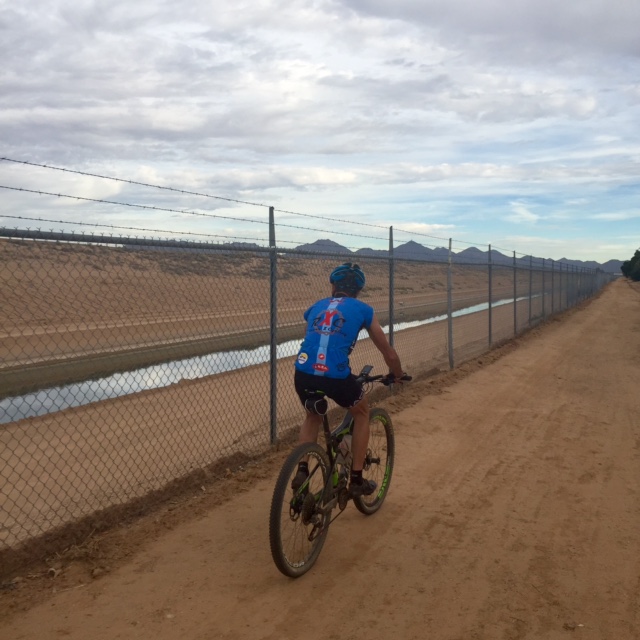 Vincent riding back to the car dealership. They really protect their water down here. 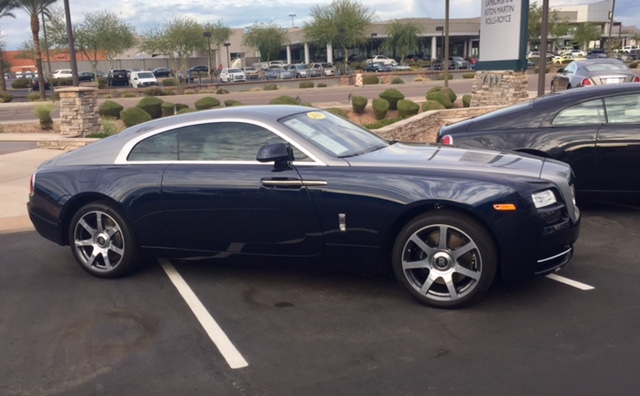 This is a 2016 Rolls Royce. The car dealership was incredible. Every exotic car you can name was sold here. In mass quantities. And the price for this beauty………. 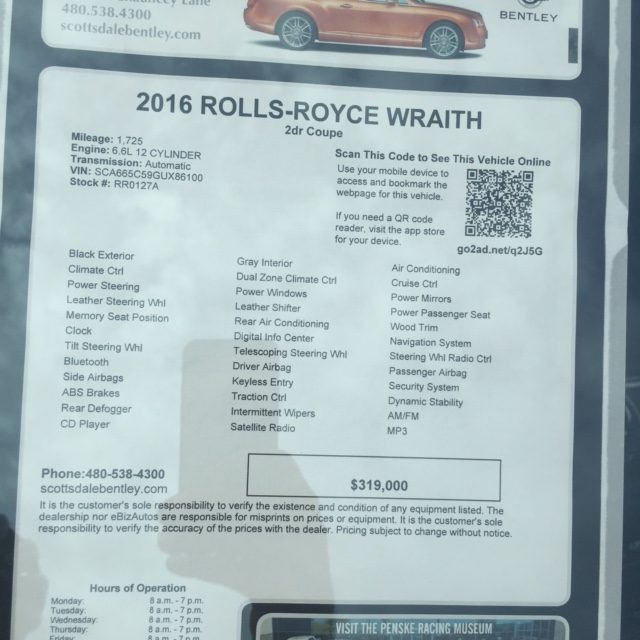 Little out of my price range.