I saw a few days ago, on multiple internet sites, articles about Phil Gaimon riding around LA and taking Strava KOM’s from Nick Brandt-Sorenson, aka, Thorfinn-Sassquatch.   Nick had a doping sanction issue and has a time-out from racing for the rest of his life.  That didn’t stop Nick from setting Strava KOM’s all over Los Angeles.

So Phil, who lives in the area, decided to allocate a month of his soon-to-be retirement and take most, if not all of Thorfinn’s records.  I got a lot of emails, and comments here, about this.  I was going to post on it when I first saw it last week, but didn’t have the energy.  Maybe still don’t.

Although, I think it was my original idea, which was a April Fools post this year, I applaud Phil for doing this.  I wish I hadn’t been out of commission for the full month of November and I would have ridden a few of those climbs with Phil.  I was heading out to LA to ride the Mike Nosco Memorial Ride in early November and was hoping to do Phil’s Grand Fondo a couple days later. (He has lots of cookies for rest stops.)  Maybe he’ll leave a couple for the rest of us.

Phil only went up Latigo around 9 minutes faster than me.  I’ve only ridden it a few times, and have always stopped before the top to eat some watermelon, so he probably only beat me by 4 minutes or so.   I think I need a shorter, steeper climb anyway.

Here is the link to Cyclingtips for Phil’s own description of his quest.  It isn’t a bad way to get the lay of the land out in LA, huh? 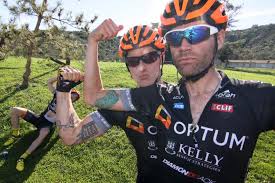 Phil and my buddy, Brad Huff, showing off the guns.