You know, these days are really dragging along.  I’m too tired, or dizzy, to do much more than just sit.  And even though I’m sleeping some, I’m awake way more than I should be, so the days are longer than usual.  I wouldn’t normally mind that, but when I’m too under the weather to do anything productive, then the extra time seems valueless, even though maybe it just a short time, I’ll appreciate it.

Yesterday was Tucker’s 11 month birthday.  He loves running around in the fields that even though it isn’t too great for my energy levels, I’m doing it.  We end up walking a ways, which has to be good for me.  I’m walking pretty slowly, still having a balance issue.  It’s getting better, but it is still bad.

We ate dinner at the Walberg’s house.  It is just two blocks from mine, so it was another short walk.  It is fall here in Kansas now, the evening are cool.  I’m not eating much yet.  I’m not sure what that is all about.  Left over from Seattle, Keith and Catherine make pretty complicated and great meals at night.  This was the same.  It was super.

Yesterday I got a lot of emails.  I looked at some of them, which is kind of a first.  I still have nearly a 1000 I haven’t read.  I’m not sure when I’m going to go through those.  I can’t image doing it now.

I realize that so many of the emails are super uplifting and super nice.  I have to say that I am surprised how many people I don’t really know have reached out with their knowledge and encouragement.  Surprised might not be the right word.  Humbled might be more appropriate.

People I haven’t talked to or seen for years have sent me notes.  Even more is the gifts.  I can’t believe how many packages have come.  Bike tires, books on tapes, Omaha steaks, music, you name it, I have it now.

I have been thinking back upon this whole episode.  I don’t think I appreciated how jacked up I was at first.  I have been recreating the first few days I spent in the intensive care and now realize I don’t have an ability to remember much.  I don’t think I was out of commission.  I think my head hurt so badly that I didn’t have any extra energy to do anything other than try to deal with the pain.  Or throw up.

I have super good friends.  A lot of them.  They were by my side from the second I was laying on the road to leaving the hospital nearly a week later.  Again, at the time I don’t think I appreciated them enough because of my inability to do it at the time.

Joseph Schmalz rode over from Lawrence yesterday to see me.  That was super nice.  He ended up staying over an hour.  I hope he got back before it was dark.  He is racing Kansas State Cylcocross Championships in Kansas City today.  He was hurt pretty good in Hotter than Hell a couple months ago, so is just back into shape.  He should do fine today.  I wish him luck.

Okay, it’s all baby steps.  I’ve been riding the trainer everyday the past week.  Pitiful resistance and pitiful heart rate.  Even though, I feel a ton better just doing something even though it sometimes is a chore getting on it.  When I’m done, I feel the best I’ve felt all day.

I hope to go out to the country again this afternoon.  Bill has been bringing his English Setter too.  I think Catherine is going to come today and bring Jason, a pocket Pomeranian.  Jason is great, but not really a field dog.  He does try though.

These walks are the highlights of my day. At least I can do them somewhat.  It is better than sitting in a chair moping. 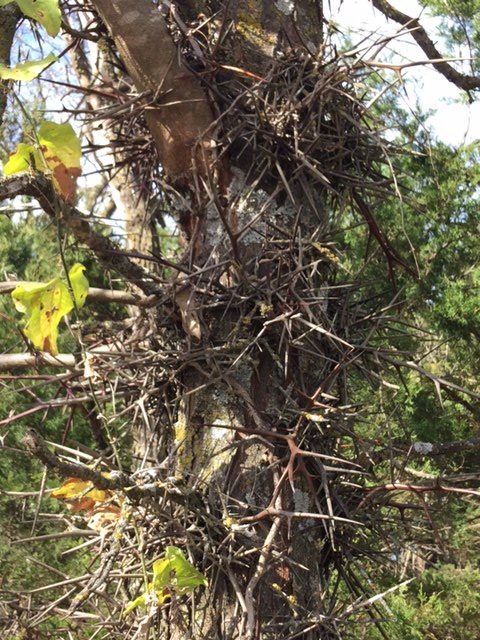 Kansas has locust trees. I hate these things. More than once, I’ve impaled myself on these. 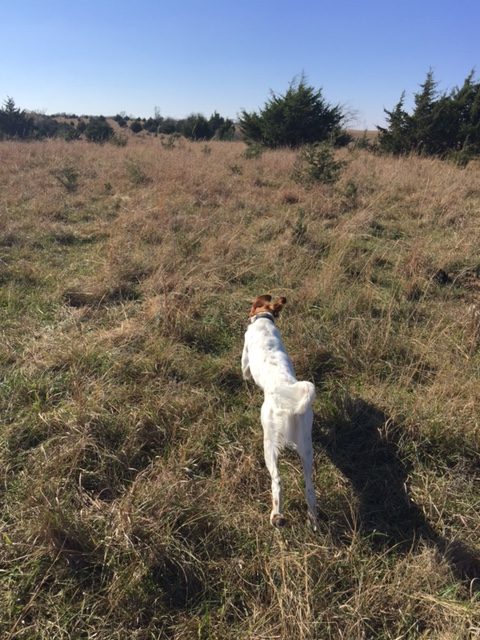 Tucker runs continuously. He comes back and checks on us pretty often, but he has things to do. 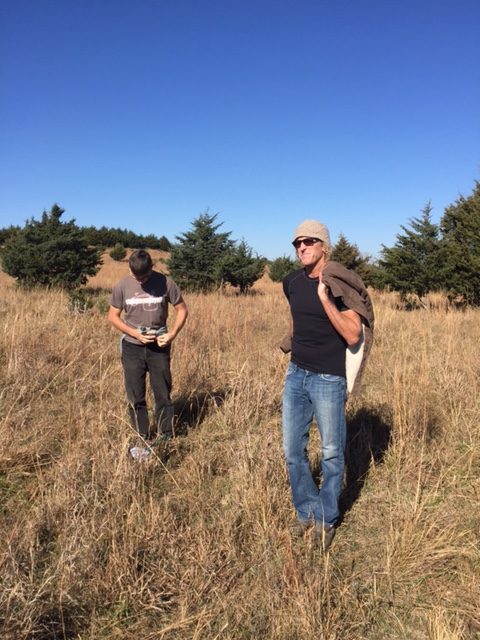 There is worse things to do than walking around out in the country letting your dog play.