I got a few comments about racing the Tour de Trump and had I met the guy.  The answer is yes and yes.  His organization only sponsored the race one year, then it was taken over by Dupont, but the year they did sponsor it, Mr. Trump came to the start in Albany and then to the NYC start too.  I don’t remember seeing him at the banquet, but he might have bet there too.

I was riding for the Wheaties Schwinn Team.  Riding to the start of the prologue time trial in Albany, we came upon a traffic stop.   A Lamborghini SUV was pulled over.  I’d never seen one, so I went over to look at it.  There was a guy standing there and I asked him if it was his.  He said no, it was Mike Tyson’s.  I look over and Mike Tyson is sitting in the driver’s seat with his window rolled down.  I ride over and say hi and introduce myself.  He stuck his hand out and I shook it.

I tell him that we are riding over to the start of his buddy, Donald Trump’s bike race.  He says something like Donald is a character.  Turns out the first guy I talked to and Mike were having a little race on the streets of Albany and were getting tickets.

So I get to the start of the time trial and they are doing some introduction stuff and they had me come over.  And there is Donald getting introduced.  When they introduce me, Donald came over and shook my hand and we talked a little.  He didn’t come across like the sharpest tool in the shed.

He had a couple big body guards,with little small machine guns, kind of surrounding him.  As soon as he moved past me, a bodyguard sort of pushed me out of the way.  I was straddling my bike, so wasn’t prepared for the encounter.  I wasn’t happy getting shoved around with a guy with an Uzi.

I was riding away to prepare for the start and was thinking how weird it was to meet Mike Tyson and Donald Trump the same day.  I probably have pictures of myself and both of them, but I am too tired to go look for them.

Thinking back upon it now, it seems weirder, considering Mike’ and Donald’s life paths.  Guess bike racing was a little more popular back then here in the US?

If you want to watch a little cyclocross, Trek is streaming the race right now.  The women’s race just started and the men’s race is at 8 am CST.  The course is a mess. 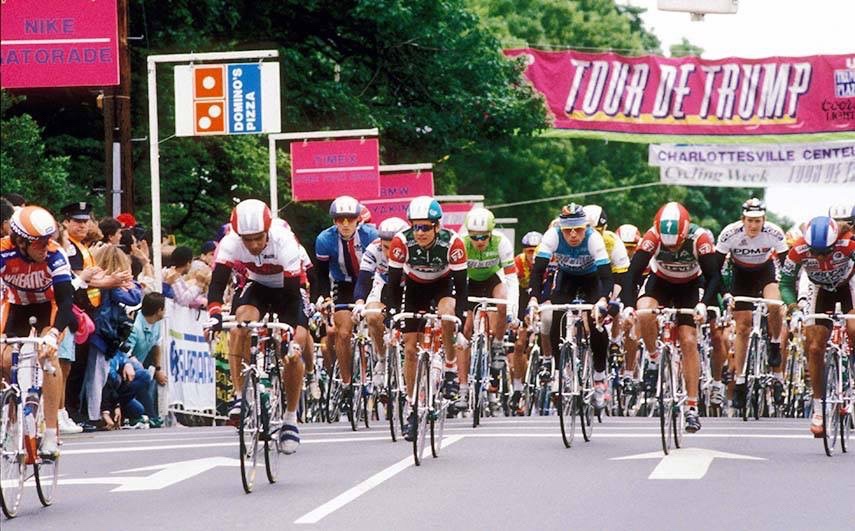 My friend John Pierce took this photo and got me thinking about posting this. He wished me good luck in recovery, which is super nice. I’ve known John for years. He is a great guy and super bike race photographer.I’m on the left in the Wheaties/Schwinn jersey.  My friend and old team mate, Andy Hampsten is a couple guys over in the 7-11 jersey.  Two riders over from him, in the blue, is Viatcheslav Ekimov.  He was an amatuer pursuit rider back then.