I crashed and fractured my skull two weeks ago today.  Man, has it been a long time.  Things have been going way worse than I’ve every experienced, so I kind of mixed up the recovery yesterday.  We’ll see how that goes.  So far, nothing new, which mainly means I’m at square one.

Yesterday, Stacie, my friend, and an orthopedic doctor from Louisville, called a neurosurgeon from Kentucky and talked to him about me for a while.  He told Stacie that I’m going to have this headache thing going on for a bit.  Maybe up to two months or longer.  So now I’m on a 7 day prescription of a pretty high dose steroid, along with Celebrex, which together, should reduce the swelling in my head and make it so I can sleep some.  Man, I can only hope.  This has been ridiculously frustrating.

Bill has ridden a couple times.  He is riding his MTB around town for a hour or so.  He has a bunch of broken ribs and collapsed one of his lungs, so he is going to be slowly healing too.  He is doing way better than me, but it is still going to be a while before he is back up to speed.

Days really are really long when I’m only sleeping a couple hours every 24.  Night especially.  I’ve been sitting in the kitchen, with my head on the kitchen table, listening to the BBC from midnight until dawn.  Last night, I might of slept another hour on the table, but my neck was so stiff that it wasn’t really an advantage.

Okay, all these posts just seem like the same thing over and over.  But man, I don’t remember being in a situation like this before.  Like I wrote yesterday, I haven’t seen a x-ray or CAT scan of my skull, so I’m not even sure where it is broken.  They said two different places, but the whole thing hurts so badly that I couldn’t tell you where it is cracked.  It really doesn’t matter I guess.

Trudi pulled the staples out of my head yesterday.  They had been there for nearly two weeks, so they should have been yanked out earlier.  They were loose, so it didn’t take long and didn’t hurt at all.  I tried to get my head surgeon doctor appointment moved up, but they didn’t seem to want to call back.  Maybe today they might move it up a day or two.  That would a nice , appropriate thing.

Kris sent me some photos he took at the crash.  I have no recollection of anything associated with it, so it all looked new to me.  KInd of surprised there isn’t a picture of the dog.  I don’t think anyone on the ride actually knows the dog I flipped over.  I surely don’t.   Okay, pictures are below.  I’d normally say thank god it’s Friday, but I hardly know that, so it is just another day of the week, the same as it has been the last 14. 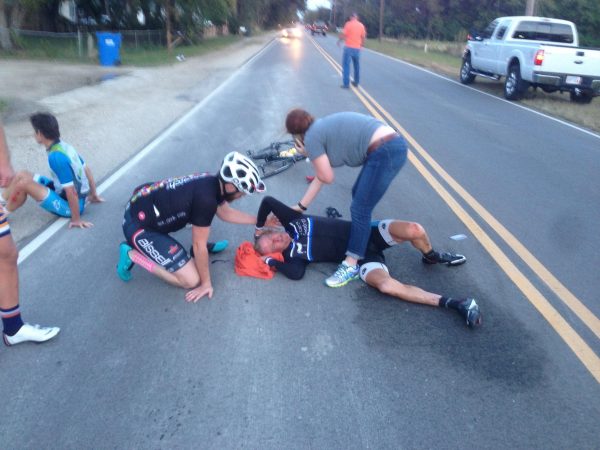 Laying in the middle of the road. Bill ran into me from behind and is on the edge of the road.  They cut all my clothing off in the ambulance. 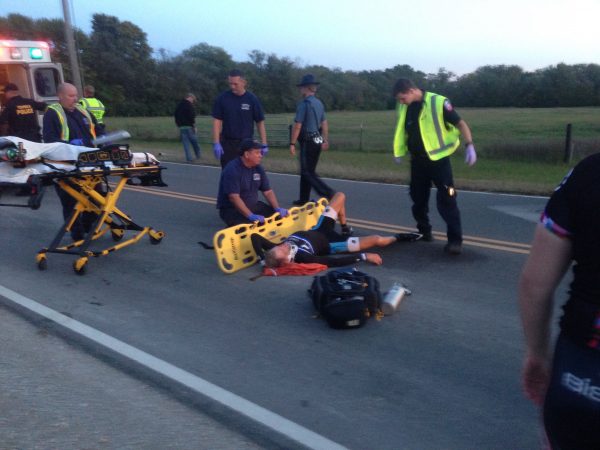 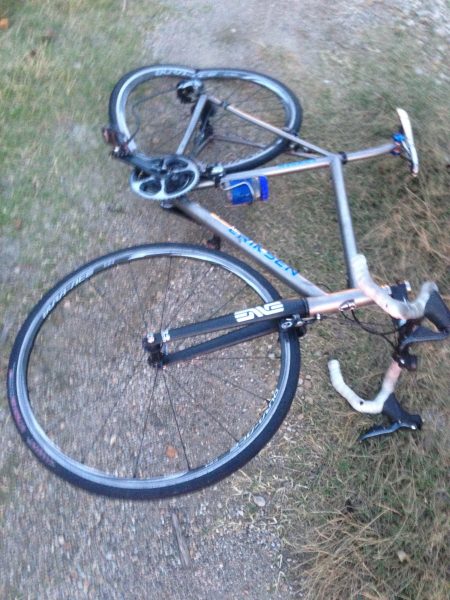 I don’t have my bike, so don’t know what is the matter with it. Obviously the rear wheel is not good. 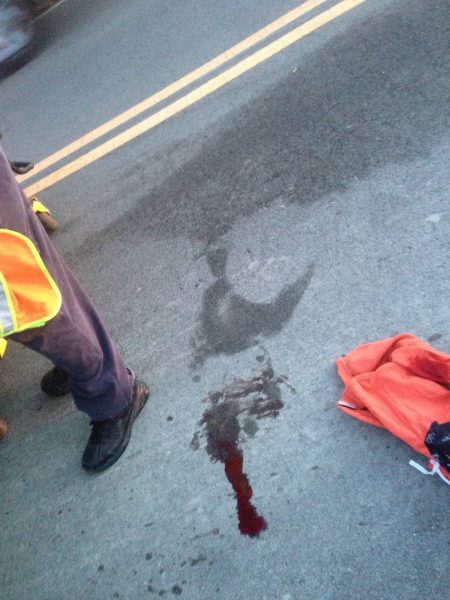 I guess I left a puddle of blood on the ground after I left.