I’ve been switching between a bunch of bikes recently and they all feel sort of foreign.  I don’t think that is a good sign.

I’ve been riding two different MTB bikes, a rigid Eriksen and then a dual suspension.  They both feel like alright,  a little slow, depending on how low I ride the pressure, but alright.

Then the two cross bikes I rode most of last weekend.  The bikes aren’t exact.  One is Di2 and feels great.  The other is mechanical 10 speed, and it feels a little off.  The reach and seat heights are the same, but maybe the shift levers being different throws me off a little.  Whatever the reason, I need to get them feeling closer to each other.

Then my road bike.  After riding these other 4 bikes the last two weeks, I got on my road bike. The seat felt too low and the reach felt pretty long.  My road bike is my go-to bike and now it feels the most foreign.  I wonder why that is?

It doesn’t take that long to get used to a different bike.  A couple times, at big races, I’ve switched onto bikes that weren’t even close to mine and after not to long, they feel fine.

The first time was at the World Road Championships in Giavera del Montello, Italy.  I was in pretty good form and thought I was prepared.  I had just finished the Coor’s Classic, at altitude, flew to New Bedford, MA and won a big criterium there and then directly to Italy.

My bike was perfect.  I told the USAC mechanics to not touch a thing.  I woke up the morning of the Worlds and went to get my bike.  I realized immediately that everything had been touched.  I asked one of the mechanics and they told me that the Japanese Shimano guys had come in the evening and put all new parts on my bike.  I didn’t understand it at all.

Anyway, I was racing, maybe 50 miles into the race, climbing, when my chain snapped.  I didn’t fall, but stopped, of course.  The Campy car following the race had a whole rack of bikes on their roof, but the mechanic was in no hurry.  He was smoking and just looked at me, trying to figure out the right size.

Luckily for me, an US rider that had done the TTT, was standing a little bit up the road.  His name was Tony Palmer.  Tony had his bike and jumped over the barriers and road it down to me.  Tony was a tall guy, maybe 4 inches taller than me and his seat was much higher.  I got on the bike and started chasing.

Since I was climbing, I just stood.  But when I sat, it was a long stretch.  The seat was so high.  I thought I’d get to the pit and they would have my bike fixed, but when I got there, no bike.  I had caught back on and wasn’t feeling all that comfortable.

I rode another lap, which was maybe 10 miles, and finally my bike.  I switched bikes and instantly thought, “Why did they lower my seat?”  The seat height on my bike felt so low, like it wasn’t even my bike.  I think I got dropped that lap, maybe the next.  If I had to do it all over again, I would have just stayed on Tony’s bike.

Nearly the same thing happened a few years later at the Pro Road Championships in Philly.  I was racing MTB full-time and just flew out there for the one day.  I had a aluminum Prism frame.  I don’t even know where I got that bike now.

About 30 miles into the race, my bike started feeling really weird.  I glanced down and the downtube was cracked all the way around where the shifters were.  I was riding STI levers by then, so the shifter bosses just held the cable routing.

Anyway, I realized it was super dangerous and dropped back into the caravan to get a new bike.  Mavic was the support then and they only had a 52 cm frame that had my pedals.  They did have a MTB seatpost, with quick release, so I could get the seat up.

I caught back on and it felt like I was riding a kids bike.  The reach was so short I’d hit my knees on the bars every time I stood.  Plus, I was having a hard time remembering where to shift.  I first tried the brake levers, then reached for a plug shifter, and finally the downtube shifters.

Eventually I got the shifting down, but I kept hitting my knees into the bars for the next hour or so.

I thought I’d ride maybe another 30 miles or so on the small frame, but I rode the whole 156 miles.  I was in the field at the end and finished somewhere in the top 20, which was okay money back then.

After the race, the bike felt just like it was mine.  So it took maybe 4 hours of racing to get comfortable on a really small frame.

I’m thinking about just riding my cross bike the rest of the fall.  The position is shorter and it feels right now.  I don’t really have any more road racing on the horizon.   It is better for gravel, obviously, plus it just feels better for now. 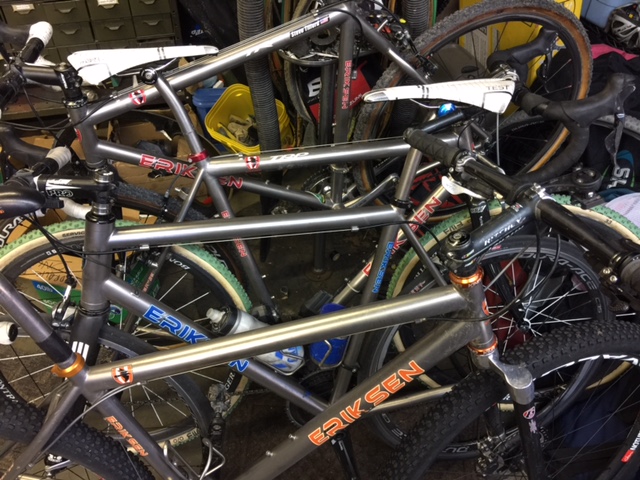 Stack of bikes in my garage. Everything is always in disarray after returning from a messy cross weekend. 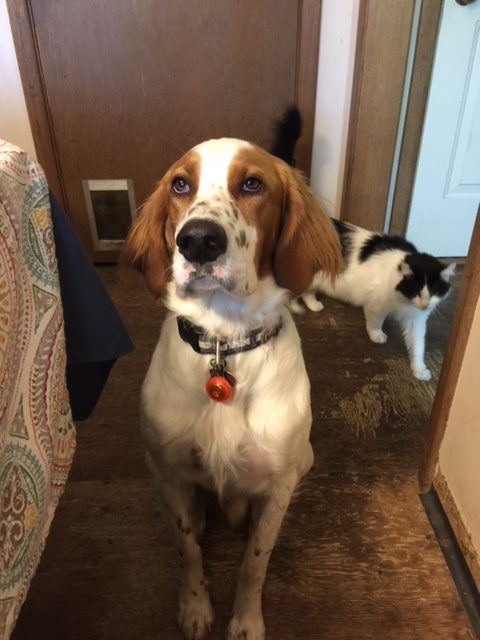 Tucker is trying to get me to take him out romping. He is so focused, he doesn’t realize that he has a cat stalking him.

21 thoughts on “Switching Between Bikes”