Yesterday morning was Elite Criterium Nationals.   I wasn’t all that thrilled to be doing it.  For two reasons.  One is that I’m riding like shit.  The 2nd was that is was going to rain and I haven’t really ridden a rainy criterium since I broke my hip two years ago in Quad Cities, so I was apprehensive about the whole deal.

But, it was going to rain, and I was there to race, and I really needed to just clip in and do a race in the rain.  But riding around a course that seemed to be a recipe for diasaster, with 125 other guys, wouldn’t have been my first choice in getting back to speed at it.

For some reason, they decided to line up the first 5 rows by USAC criterium ranking, so I got a good start on the 2nd row.  That wasn’t key, but it was nice not having to worry about lining up early.

I drove to the race.  I was planning on riding the 18 miles there, but it was already raining and I was hoping that it was going to blow North of Louisville, so I we might stay dry.  No luck.  So I put on my booties and rain jacket and went out and rode 10 miles to warm up.

Warm up didn’t go too good.  I didn’t feel horrible, I just didn’t have any power.  I thought I would get my heartrate up and when I looked down at my speed I was barely going 26 mph.  I realized that wouldn’t cut it.

But, it is what I had.  So, I lined up and went with it.  In reality, the race wasn’t that hard.  There really wasn’t a 90 degree corner.  There were just a lot of sweepers, a couple off-camber.  And the first off-camber corner is what got guys spooked.

Even after just one lap, they were throwing guys back in at the pit.  If I have one complaint about the race is about the pit on the start/finish stretch.  The road wasn’t wide enough and we were coming down curb to curb, so when there are riders standing still, it was not good. Actually it was super dangerous.  The pit guys figured it out after a couple laps and kept the guys they were throwing it back in the tent, so it was better.

Nothing seemed to go.  The race was fast.  Especially for the rain.  I had a 28.4 mph average at the finish.   I had no power sitting down so it seemed that I spent half the race standing up out of the corners.  But, like I said, I am not going good at all, so survival was all I could hope for.

It was obviously Daniel Holloway was going to win if he didn’t crash.  Early in the race, a 6 man group got a couple hundred meters up the road and he just casually rode up to the front and starting chasing.  I happened to be on him and he just pulled.  For two laps straight, he just sat on his seat and reeled the break in.  I was jumping as hard as I could go out of the corners to stay on and he was breathing out of his nose.

Daniel was nice during the race and said it was nice seeing me out there riding.  It wasn’t pouring by then, but it started pouring.  Like heavy, heavy rain with less than 10 laps to go.

Flash forward to the last 5 laps.  With 5 to go, there was a big crash on the back stretch.  A lot of riders fell on just a gradual curve.  It sort of split the field.  I was to the left of it, so I got back up to the front fairly unscathed.  The free laps were done, so those guys were out.

And then it started going.  I was planning on trying to start as close to Holoway as I could, knowing that if I just was on his wheel, I’d been in super position.  With a lap to go I was maybe 15 guys back with Holloway sitting 4 or 5 guys from the front.  On the 3rd to last sweeper, I moved up 5 riders and then was just a couple guys behind Daniel.  I’d been taking the 2nd to last corner, a big sweeper, u-turn, to the outside, passing a few guys each lap.  I decided to take that line again, realizing it was a small risk, but I thought the reward would be worth it.

But it wasn’t.  A rider two in front of me, between myself and  Holloway got wide on the corner and swung so wide he  went off the course.  He took Dennis Ramirez, Gateway Harley Davidson to the grass too.  John Purvis went to the grass too.  I just grabbed a ton of brake and a huge gap opened up between me and the front 8 guys.  A few riders went through on the inside.

I sprinted the 2nd to last stretch and caught on the back into the last corner, but it was still 400 meters to the line.  I was pretty much done by then.  I lost a couple more places and finished 19th.  Sort of depressing, but nothing unexpected.  Daniel completed the sweep of the two mass start road events at Louisville.

When criterium racing in the rain, you can’t be 10 guys back with two corners to go.  But I needed to not expend any extra energy if I wanted to get a decent result.  And it didn’t work out.

I’ve said a million times I’d rather be riding good and have a bad result than riding bad and get a good result.  I was riding bad, and had a bad result, with is maybe the worse of both worlds.

A lot of guys fell.  Some not by any fault of their own.  The crash with 5 to go took out some good riders.  Guys that could have potentially finished well.  But, that is bike racing.  I’m glad to have gotten through it unscathed.  I’ll have a ton more confidence next time I need to race in the rain going in circles.

So those races are done.  We jumped in the van and drove the 6 hours up to Delevan Wisconsin, where Trudi’s family is spending the 4th.  We’re driving this morning up to Cable to Dennis’, then up to Bayfield for a party and fireworks.  It should be fun.  I woke up with a splitting headache, which just confirms how bad I am right now.  It can only get better. 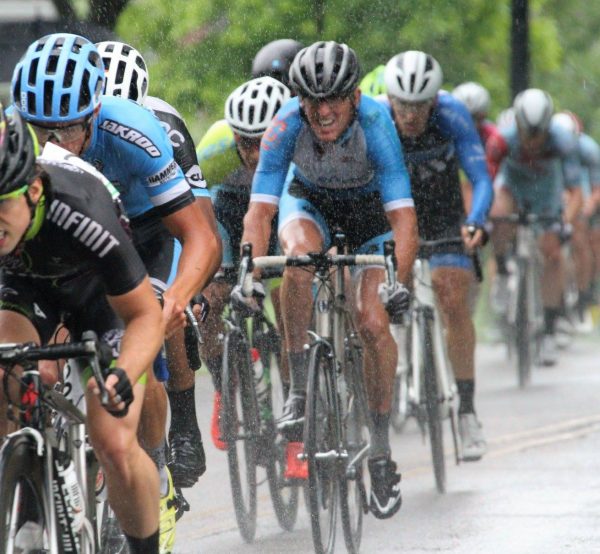 Got this from Tish Kelly’s Facebook page. She has a lot of photos. 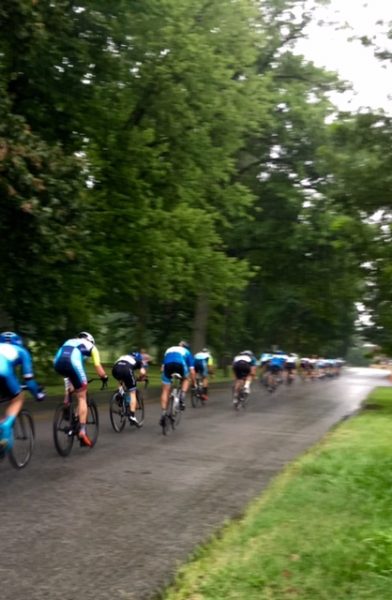 The field was stretch out like this the majority of the race. 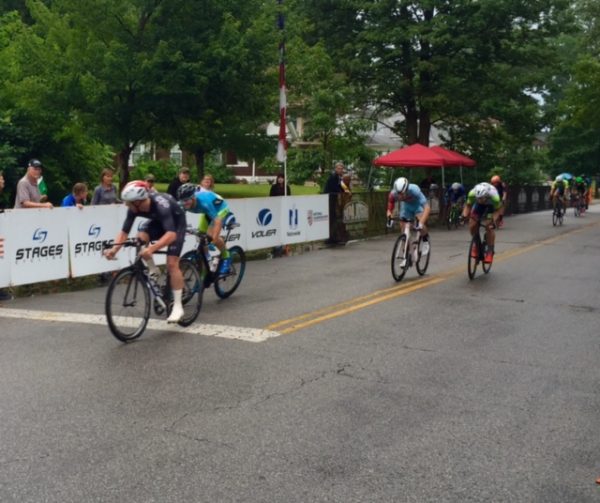 Daniel Holloway looking back just 10 meters from the line. 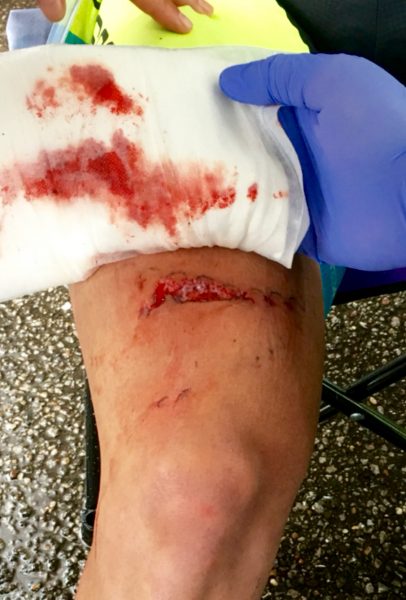 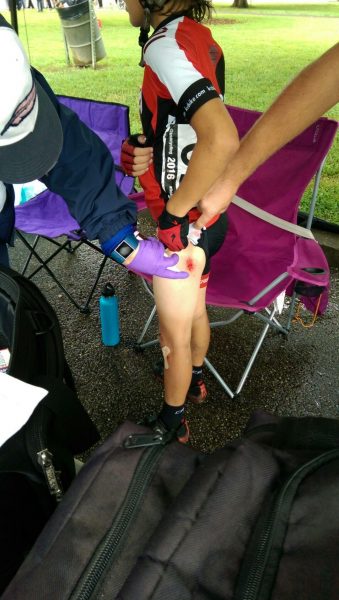 Finn Smith crashed in the Junior 11-12 race. He bounced back pretty well though. 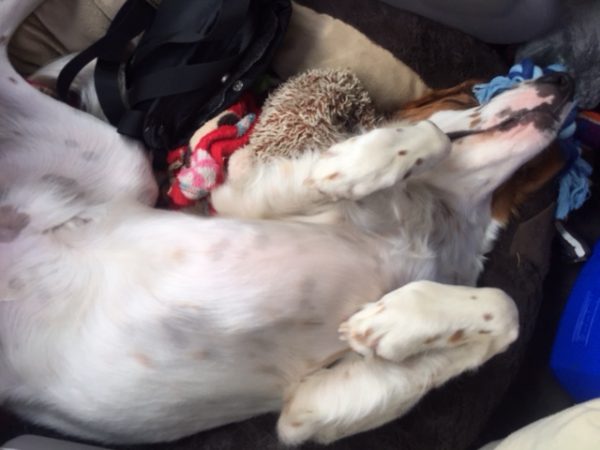 Tucker was out the whole drive yesterday. Guess watching criterium racing in the rain got to him. 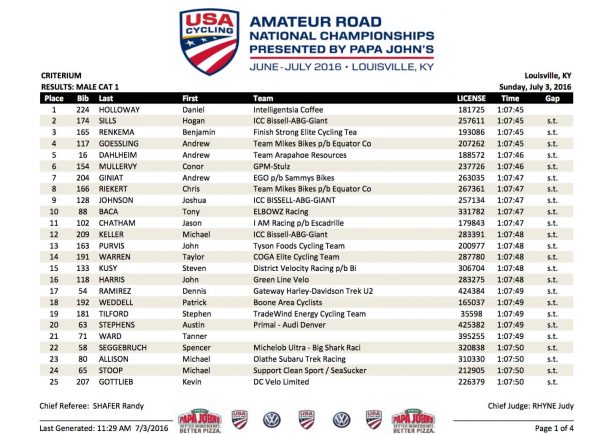 The results. There are 4 pages at USAC.