The last couple days I’ve received a lot of emails, from lots of friends, and people I didnt’ know, about Nick Frey being DQ’d from the Dirty Kanza last Saturday. It is a very divisive subject for those personally involved. I’m not personally involved, but I can see both sides of the issue. Maybe not even both sides, since there are way more than just 2 sides.

I had the pleasure of going for a couple hour MTB ride with Nick yesterday in Breckenridge and hear his view. It is pretty much the same view as he posted on his blog, minus the ending rant.

From the comments yesterday, the posts on Facebook and all the other social media, a lot of people are riled. Riled by the DQ or riled by him “whining” about it. IMO, he wasn’t whining, he was venting. And others were riled about him being disqualified.

Dirty Kanza is just down the road from me. Lots of my friends, guys I ride with on a daily basis, did the event. The race started as a grassroots, self-supported gravel race, way before gravel grinders became popular. Since it is 200 miles, got an early start, has epic views and conditions, etc. it is considered the “go to” gravel race.

Here’s the deal. The race is going through growing pains. Pains is probably not the right word.  And this is just one of those things. DQ’ing Nick is really inconsequential in any picture. It wasn’t a lifetime achievement for Nick, other than it will probably be ingrained into his brain forever now. He finished 6th. He wasn’t having a good day. Do you think the guys that moved from 8th to 7th or 9th to 8th are all stoked? I doubt it. Maybe the guys that finished 11th or 21st are a little happier, but, in reality, it really doesn’t matter. For most, this race is for life experience, not results.

One thing the disqualification does is bring the issue to the forefront. I am not much into rules. The less rules to break, the less hassles surrounding events. I remember having an encounter with Dewey Dickie at the finish of Chequamegon one year. Gary Crandell “ruled” I had entered the event and was wearing a helmet, so he didn’t see a rule he broke.

But, there are rules at the DK. It is supposed to be self supported. Leading up to the race, I got emails for lots of people from throughout the country hoping I could help them find some support for the DK. Travelling to the event is expensive enough, but paying for a support crew makes it pretty costly. I understand that guys could have paid the race something like $75 and buy support. I don’t know what that entailed, but that was/is an option.

I talked to Nick a bunch about his issue and his take on it. Let me tell you, Nick is a good guy. I met him a long time ago when he was racing out of Iowa and he has always been on my good guy list. He is smart, articulate and fun to be around. I doubt anyone that reads this post would not agree with me on this. Yesterday was no different. He rode over from his house and met us. And he had a blast riding on his local trails. He likes/loves riding bikes and just living the life. We went by his house afterward to powerspray our bikes.

I think of what perturbs Nick is a couple things. One that he thinks by being DQ’d he is being labeled a cheater. That is wrong. He wasn’t cheating. He honestly didn’t know the rules. Admittedly, that was his fault. Again, IMO, he wasn’t doing the race to win. He was doing it because of the challenge. He had gotten married just a couple weeks earlier and hadn’t prepared properly. (As if I would know how to prepare for it either.) And his support crew was non-existent. He was disqualified for either taking a bottle from a guy he knew or because a van with a Boo magnetic label was on the course. Both of these infractions “required” disqualification. Officially.

And I think that is the crux of the issue. It is a grassroots-type gravel race. Getting disqualified from an event like this wouldn’t sit well with any ex-professional bike racer. It is funny because a lot of the posts I’ve read about the subject seem to put some negative spin on his past. Being a professional bike racer has nothing to do with the circumstances here. And DQ’ing a rider from the event isn’t something that the promoters, Jim, Tim, & Kristi want to deal with. This isn’t part of grass-roots bike racing.

Even though Nick says it, I’m not sure that Nick wouldn’t have finished without a handup at mile 70 or where ever his infraction occurred. He doesn’t really know. Someone would have given something I’d think. And I am absolutely positive that many of the other guys in the top 20, like probably the majority, took feed out of the feed stations.

And that is the rub. Say that Nick stopped at “his” support van, (wasn’t supporting him) and then 5 other guys stopped with him. He broke the rules and the other guys didn’t. Because their support vehicles weren’t on the course and they didn’t know who they were getting the feeds from. It would be the same as getting water from a farmer’s hose. Just because a guy on the side of the road is handing out water from a Boo labeled van, it isn’t a violation, other to Nick.

And as Nick says, he gave what he got “illegally” to the guys he was riding with. And they probably witnessed him taking the feeds. Should they be DQ’d too, knowing that the feed was illegal? I say no. Nick is like a money launderer in this regard. The dirty money stops with Nick.

I could go on and on giving examples and trying to explain the situations. Here’s the deal.

I think these races are like golf. You call your own fouls. There aren’t officials out there policing the sport. The beauty of the DK200 is riding out in the Flint Hills in Central Kansas, in the middle of nowhere. On gravel, with very, very few vehicles on the road. The rule about not having support on the roads is because of this. It is unique and the experience wouldn’t be the same without the “no support” rule.

Nick, self admittedly, didn’t know the rules. after the fact, he found a discrepancy between the written rules and the verbal ones given at the pre-race meeting. He didn’t read the written ones. He thinks that the race has morphed from a small grass-roots event to a major event, which isn’t a stretch. He believes that the rules need to be clarified. Even though I dislike rules, I agree. And he believes that there needs to be neutral support at the 3 aid stations on the course. I agree again. I wouldn’t want to go to the NYC Marathon and expect to have to supply my own support for nutrition. For us Kansans, it isn’t a big deal. We get friends to come and give us a hand. But if you’re flying in from other states, or even from other countries, it would be nice not to have to pony up an extra $75 to get some waters and gels.

The race is to the point of where it could even make money for the nutritional supplement supplier for the event. That is a win/win for all involved. I do understand that some of the attraction, for many of the riders, is the planning for the support. Carrying the right equipment, riding the correct tires, planning for every situation that might occur is something, understandable, to be proud of. I am big on race prep. And this race involves big race prep, as it is currently run.

I wrote the above part last night before I was contacted by Jim Cummins. He is the promoter of DK. I talked for him awhile last night. Jim explained pretty much exactly what I wrote above. He said that Nick was DQ’d for having a support vehicle on course. When you take the feeding out of the issue, it really becomes less cloudy. The reasons behind not having vehicles on the course are important and need to be adhered to.

He explained that if you supplied neutral feeds that riders wouldn’t necessarily bring support, which is important in case that the rider can’t complete the race. He said that nearly 40% of the entries DNF’d, which is a big number, but not by DK standards. Some years it is over 50% I think. Trying to remove those guys from all places on a 200 mile loop would be nearly impossible for the promoter. Thus the rule that you need to bring or have support. It makes sense.

And not having support vehicles on the course, other than the appointed feed stations, is key to a successful event.

Nick obviously didn’t understand the reasons behind this. I really didn’t until Jim explained it. Neutral feeds wouldn’t alleviate the abandonment issue.

Anyway, I think the whole thing got totally blown out of proportion. Nick did write his epic about his situation. He needed to, I think. No matter that the result wasn’t important to him, the accomplishment, personal accomplishment, of riding completely wasted for the majority of the race is something important.  This whole thing probably wouldn’t have even happened with Boo magnetic sign on the side of the van.  That isn’t an excuse, it is just an observation.

Nick didn’t cheat. Cheating implies intention. He had not intention. I don’t think whatever happened out there changed the results the least. But, it did change the experience. Not by much, but a lot of people saw the van with a Boo sign on it. People that had read the rulebook and knew it wasn’t supposed to be their. And it bothered them. Bothered them enough to say something about it. That is fair. And, I have to say the end result was fair too.

Setting a precedent for rule that is important and right. I told Jim that this publicity is only good for the race. The race is hard. It is hard for all the riders, from 1st to last, to the 40% that didn’t complete the course. It shouldn’t be taken lightly.

I think that Nick learned a lesson here. I think the issue is pretty much over. After all this, I’m thinking I need to experience this all myself next year. I hope to be riding with Nick and some other friends. That would be a blast. 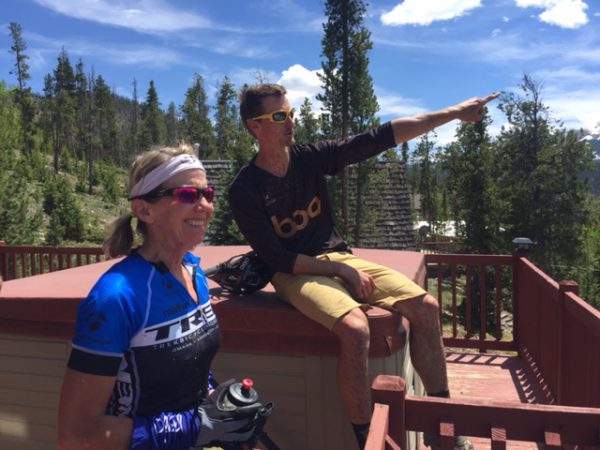 Nick point out to Catherine where we were riding earlier. 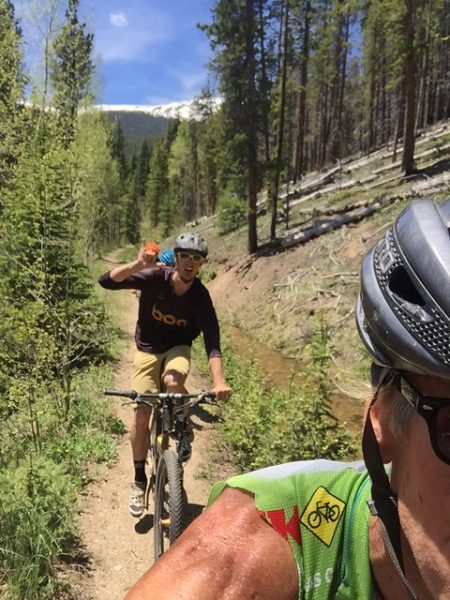 Out on the Peak’s Trail above Breckenridge. 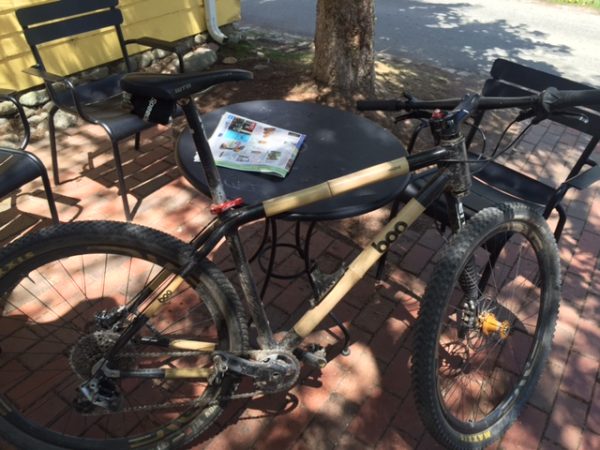 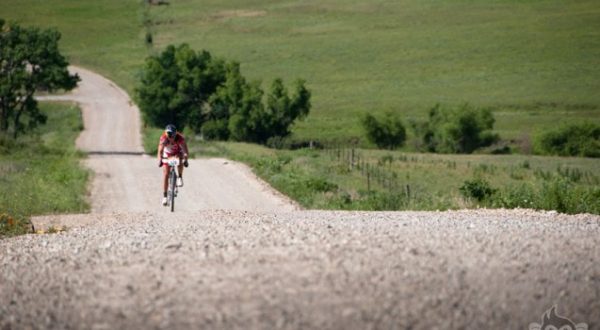 This photo would look completely different with a bunch of cars in it. 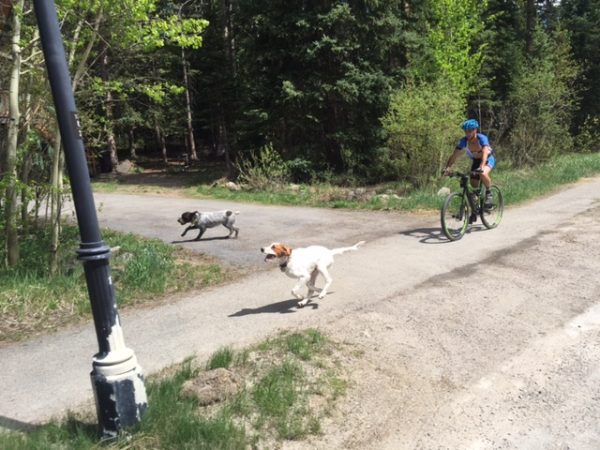 Nikola and Tucker out running with Vincent yesterday.