I feel a little sad because I failed to remember that Bromont has been gone for over a year now. It was May 3rd, last year, and the time has seemed to pass so quickly.  I guess I should feel alright about it, because I’m not dwelling on missing him so much.  That is a good thing.

I know having Tucker for the past 3 months has been a big part of that.  Tucker isn’t a replacement for Bromont, he’s his own guy, but he is super fun to be around.

Travelling with a dog is challenging at races sometimes.  But Tucker is a good traveller.  He is nearly past his chewing stage, and didn’t do too much damage.

I think that it would have been great if Bromont and Tucker had known each other.  There are completely different, personality-wise, but for some reason, that is probably more important to my mindset than for any other reason, it seems like it would be better if there was a connection, or continuity between them.  Whatever, it didn’t happen, so it is what it is.

Tucker likes to sleep more than Bromont.  That is saying something because Bromont really liked to sleep.  As soon as Tucker gets into a car, especially the diesel van, he snoozes.  And he can stay in bed for 9 hours without any problem.  That is super good for race travelling.  When Bromont was his age, he got up with the sun and wanted to go out to check on the birds.  That was really bad at races.

Tucker is just starting to get “birdy” now.  The women we got him from said he was going to be a very birdy dog.  I didn’t know what that meant, still don’t, but have a better idea of it now than I did a couple weeks ago.

Anyway, life goes on.  I still miss Bromont, as I do all the dogs I’ve have the pleasure of living with.  Bromont was special.  I’m hoping he’s running around somewhere in doggy heaven. 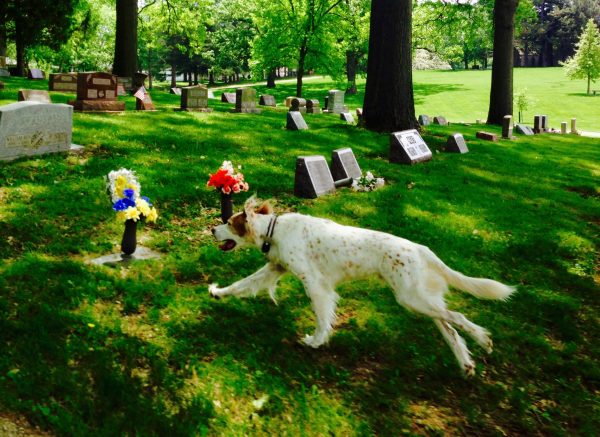 Bromont loved to run more than just about anything else.

9 thoughts on “One Year Since Bromont”