Yesterday we did two stages of the Velotek Gran Prix.  It is a just a local stage race, but has a pretty good field this year.  There are only around 30 riders in the Pro1/2 race, but it is a pretty even mix of teams and good riders.  Julie Funk, who is promoting the race, did a super job with the rain in the morning, keeping the race on time.

I sucked at the 2 minute time trial yesterday.  I don’t think I can start fast anymore, but maybe just didn’t warmup enough.  It was raining at the start and it was pretty early.  Garrick Valverde won the hillclimb in a time of 2:04, so he beat me by 19 seconds.  In Joe Martin last week, he beat me by about the same time in an 10:30 hillclimb.  Maybe I lost all the time in the first .75 mile last week too.

Alex Hoehn rode good, like he did last week and was 3rd, 6 seconds back.  Brian Jensen is back on the road after racing a couple gravel road races and a marathon MTB race and was 4th, which is pretty good considering how much different a 2 minute effort is from an 100 mile grind.

The criterium in the afternoon was strange, at least for me.  I couldn’t decide whether it was super easy or super hard.  I know that sounds weird, but I felt it was pretty hard, but could move around at will most of the time.

It was pretty animated and eventually the move went.  Alex made the move and drove it.  It wasn’t good for the Olathe Subaru guys, who had 8 guys in the race, but Benn Stover, who was 2nd in the TT, did a solo move and bridged up.  No one really wanted to work with Alex, the Subaru guys, Benn and Shadd Smith sitting on.  There were 4 other guys and I’m not sure their excuses.  But, Alex kept pulling and the field could never get their shit together.

Alex finished 3rd in the sprint, behind Dylan Postier, Tulsa Wheelmen and Shadd.  So with the 4 second time bonus Alex got for 3rd, he’s winning overall.

This morning we have a 87 mile road race around Lake Perry.  It is a pretty hard circuit, with a few medium climbs.  It is going to be a long race with such a small field.  I feel okay, and Brian will be much better the longer it gets, so hopefully we’ll be able to protect Alex.  I’m sure a bunch of guys are going to gang up on us, but that is local racing.

The race finishes on a pretty good climb off the damn at Lake Perry.  Hard enough that the field will split up at the finish.  Hopefully Alex will be on the same form he was yesterday, and last week in Joe Martin.  He is pretty good going up hills quick.  He only turned 18 last December, so if he was born just a couple weeks later he would be a junior.  He’s getting better pretty quickly.

Tucker is maturing quick too.  Yesterday at the criterium, I got my bike out of the van and let him out to wander.  Next thing I know he is about 1/3 mile up a hill chasing some vultures.  And he was crazy.  Bird crazy.  I walked up the hill, but he was already in the woods, chasing some other birds.  It took me 10 minutes to get him back, which isn’t that long compared to Bromont, but about 9 1/2 minutes longer than any other time he’s been loose.  Shadd Smith’s son, Finn, took care of Tucker during the races.  He had him all over the course, then took him back into the MTB trails at Clinton Park.  He was so done driving back from the race.  More tired than I’ve ever seen him.  But on the night walk, he had just as much energy as the afternoon.  He is a teenager I guess. 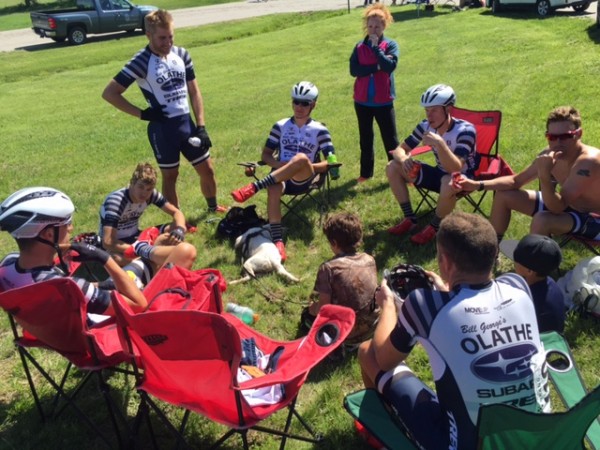 Tucker was a traitor after the race. He was hanging with the Olathe Subaru guys at their after race team meeting. 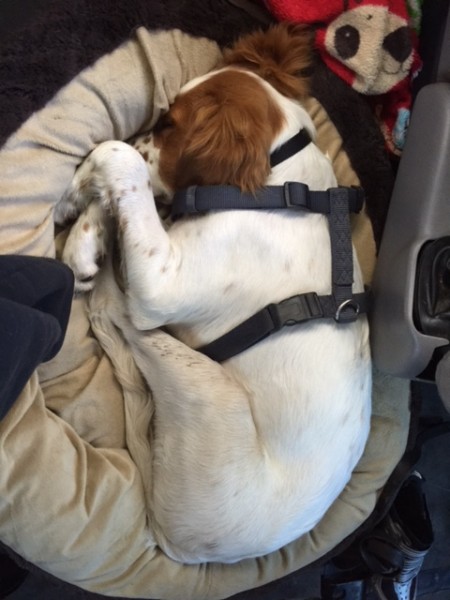 He was like this the whole drive back. Super done.