Bill and I drove out to Lake Wilson to pre-ride a MTB course of a race that was supposed to happen on Sunday.  It is around 2 1/2 hours from Topeka, so 5 hours roundtrip, without the riding.  We rode for over 2 hours, so it was a longer day.

But, it was all for not.  Bill called late yesterday afternoon and said he’d seen on Facebook that the race had been postponed because of rain.  They used to not cancel races because of rain, but now it seems common.  The trail at Lake Wilson could hold a ton of water, it is pretty sandy, but it is also slick where it is low.

So, I made a couple calls.  I was willing to drive to Colorado and do a 50 mile MTB race with my friend Vincent.  But he said that his race had been postponed too, because of snow at higher elevations.  I thought about going back to Iowa City for the criterium there, but saw that Brian West’s team, that won Joe Martin had 1/3 of the field and thought that might not be so rewarding.

I had sort of forgot there is a local stage race in Lawrence.  I thought the registration might have closed, but Brian made a call and we’re in.  The time trial is just a hill climb that is at 8 am.  It is supposed to be raining then, so I’m not too thrilled about it.  It is going to clear later for the criterium at 2:00pm.

On Sunday there is a 87 mile road race around Lake Perry.  It might be a little wet and the race starts at 8:40am.  The high for the day is supposed to be 54, so it is going to be chilly.  And windy, which is fine.

Back to Lake Wilson.  I’ve only ridden there once before and it is a super cool place.  Very unlike Kansas.  Lots of sandstone and the trail is super technical.  I was riding my Eriksen dual suspension bike and it helped a ton compared to riding a hardtail.

We were out there for over 2 1/2 hours and only rode 22 miles.  My arms were getting pretty throttled by the end.  We went back to the van and got Tucker for the last rocky loop.  Tucker had only ran a mile or so before, so this was going to be his record.

Like I said the trail is super rocky, thus slow.  Tucker was a champ.  He lead the first while, then realized he didn’t know where we were going and followed.  He never got too far away and never got in the way.  Really nearly perfect.  We ended up going a little over 3 more miles and he seemed fine, but like I said, we were maybe going 9 miles an hour and now he normally runs over 15 on our nightly runs.

I was really looking forward to the race on Sunday.  I felt out of my element, but got tons better. I would have really liked to see how much more I improved at race pace.

But I’m road racing it seems.  It is Brian, Alex and me doing the race, so that should be run. There are at least 3 other teams with 4-5 riders each in the 1/2 race, so it should be competitive, which is always nice.

Okay, I need to get packed up and head out the door. I’m not big on these early morning starts. 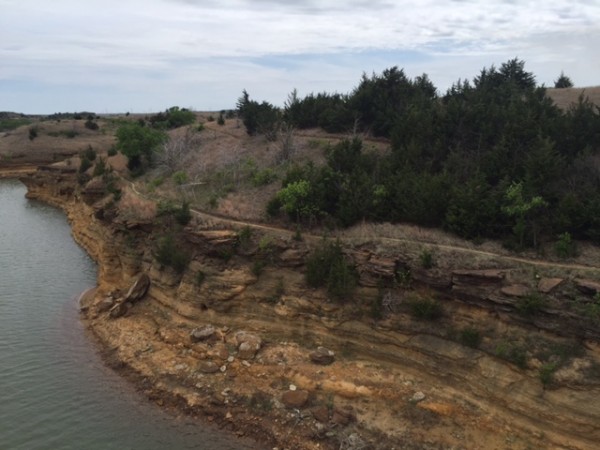 The trail is right along the edge of the lake quite a bit. 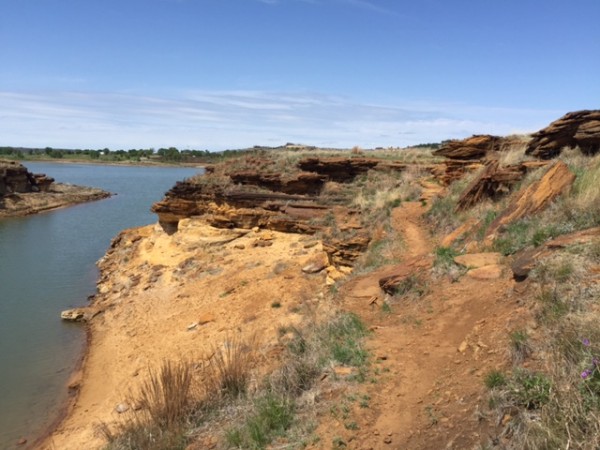 You have to be careful or there is quite a drop off. 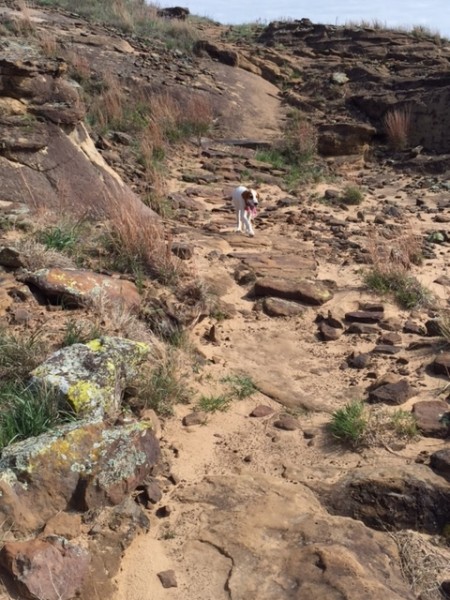 Tucker was wondering why we weren’t faster. The picture doesn’t do it justice. The trail is steep. It goes up that rock behind Tucker and is nearly trials riding. 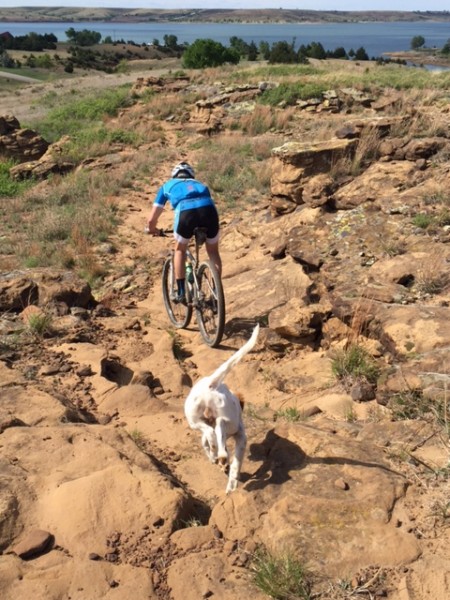 Tucker liked being in between us, which was fine by me.

One thought on “Thought I was MTB Racing, but now I’m Stage Racing”