So far this year I’ve raced 4 times.  I’ve finished 5th 3 times and 6th once.   On Saturday I won.  It wasn’t the most beautiful win of my life, but it was better than 5th.  The best part was that I was off the front with my teammate, Brian Jensen.  It was Brian’s first race of the season.  His job is dictating a ton of travel, plus lots of regular work, so he has been juggling life. It is never easy trying to match Brian pull for pull, so the counter was never moving fast enough for me.

The Spring Fling Criterium Series is something I’ve been doing on on off for a long time now.  I’m not sure how many years Jim Whittaker has been promoting the events, but it has to be over 15, at least.  It works out pretty great for guys from Topeka, we ride the 24 miles over there, race for an hour and then ride back.  It turns out to be right at 80 miles.

Most the Subaru Olathe riders were down in Texas, plus a few other guys skipped the race because of potential rain, so the field was less than 20.  Smaller fields in local races usually make for harder racing.  It seemed that was the case.

Not much to write about.  Brian jumped off the front before the first points sprint.   I jumped early before the sprint, mainly to lure Shadd Smith into going early.  Then I jumped him after the sprint and bridged to Brian.  Then it was just us.

Brian was going good, as usual.  He is never really out of shape.

I can’t say I’m riding all that well.  This lung thing isn’t terrible, it is just bothersome.  Lots of guys are complaining, so I’m thinking it is just the burning now.  I don’t really feel that sick, just coughing a lot.  Plus, my legs are not going around as easily as I’d like.

That all being said, I had the highest wattage output from 20 minutes to an hour that I’ve had since I got a powermeter 3 years ago.  With about 15 minutes to go in the race, my average wattage was 330 and 365NP.   Those are pretty high for me.  But I don’t follow it as much as I could.

The ride back is always great.  It is a little long, but my legs definitely feel better after riding an hour or so after a race.

So Sunday, we rode over to the Perry Dam Race.  This race has been going on forever too, longer than the Spring Fling.  It is a super course, a 5 mile loop with a climb up to the start/finish line, the ride across and below the Lake Perry dam.  We were racing 7 laps, thus 35 miles.

The only problem this year was the race was sort of in flux.  Mike Hudson originally promoted the race, then Mike Schmidt, Adam Gatewood, Jack Mason, Roger Harrison, Trudi one year, and so on.  This year, no one was really up to the task, so Jim Whittaker took it over.  But the word, and the race flyer, never materialized until last week.   The turnout was pretty slim.

During the banner years, there were close 300 riders total.  I think there were less than 100 yesterday, but that may be off.  I wasn’t there for the earlier races.  Our 1/2 race had 4 people. Bill and I from TradeWind Energy plus Hunter Adams and Austin Elser from Move Up/Trek.  I think I have done a race once with just 3 of us, but this was pitiful.

We all know each other and spent most of the first lap just talking.  We came up with the idea that we shouldn’t let the big 3/4 group behind us ride faster than us.  It would be embarrassing if they were faster than the 1/2’s.  So we got into a 4 man TTT formation and did a 25 mile time time trial.

With two laps to go, we started actually racing.  Bill jumped away on the hill.  Austin got shelled and Hunter chased.  I jumped Hunter over the top and thought it was over, but on the dam, Hunter somehow clawed his way back.  It surprised the shit out of Bill and I.  When Bill told me Hunter was back, I jumped again and that was it, I was alone.

I rode medium hard for a lap, then realized I was really far ahead, too far if Bill jumped and needed any help.  I was below the dam and looked up.  Hunter was about 10 bike lengths ahead of Bill.  They were both going really fast.  I thought that was bad.  I was still riding along easy below the dam, their positions had flip-flopped.  Bill was about 10 bike lengths ahead of Hunter.

I coasted down to nearly nothing and waited for Bill.  He caught me just a bit before the final climb to the finish.  He asked if I had a flat.  I told him I was waiting.  I went pretty fast and told Bill to tell me what speed to ride up the last kilometer.  Hunter was done, so it really didn’t matter.

Just before the line, I waved Bill by me.  He wasn’t sure what I meant and when I coasted, he sat up.  I told him to win.  Again, he was surprised, I think.  I’d won the day before, plus he had a harder race than me.  Hunter had a harder race too.  Like I said above, the smaller the field, the hard it usually is.

5 of us rode over to the race and all 5 rode back.  Catherine was initially planning on driving back with Trudi, but she said she felt okay and needed the miles.  The sky was super stormy and we got a call from John-Jack saying it was pouring in Topeka, so we took the long way around to skirt the rain.  It worked perfectly.  We ended up with somewhere in the 90 mile range, with a good hard effort in the middle.  Pretty good training weekend.

I can’t say enough about the weather this year.  Like I posted yesterday, it has been shorts weather for the past few weeks and it is staying that way.  Today it is supposed to be 79 for a high.  Crazy.  I’m thinking about planting tomatoes.  The extended forecast doesn’t show any freezing temperatures for the next two weeks.  I hope these super above normal temperatures won’t  continue on thru the summer.

Here’s a video that Bill Smith made of Saturday’s criterium. 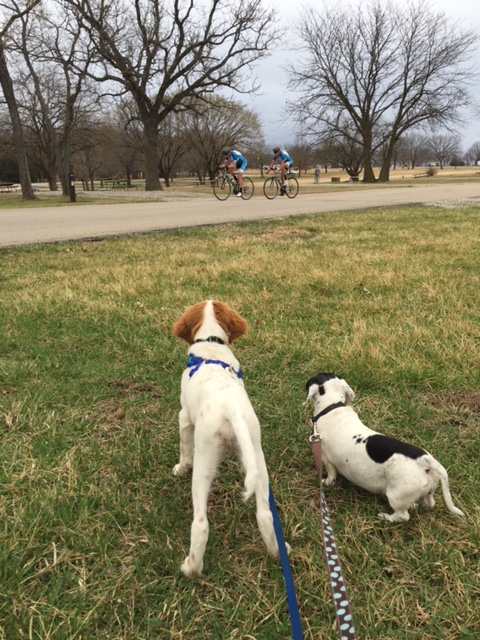 Tucker and Frankie watching the criterium on Saturday. 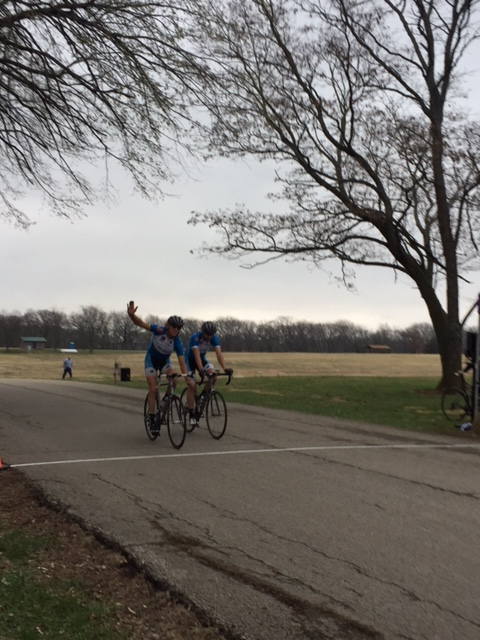 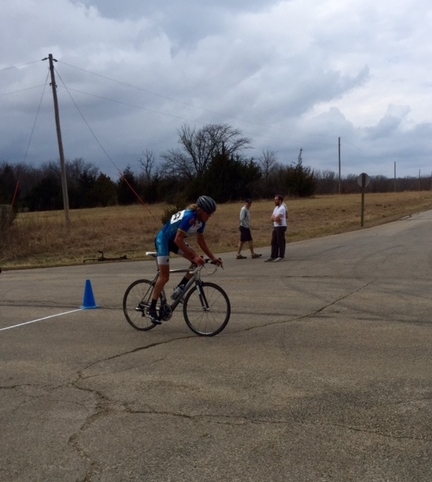 Climbing with a lap to go on Sunday. 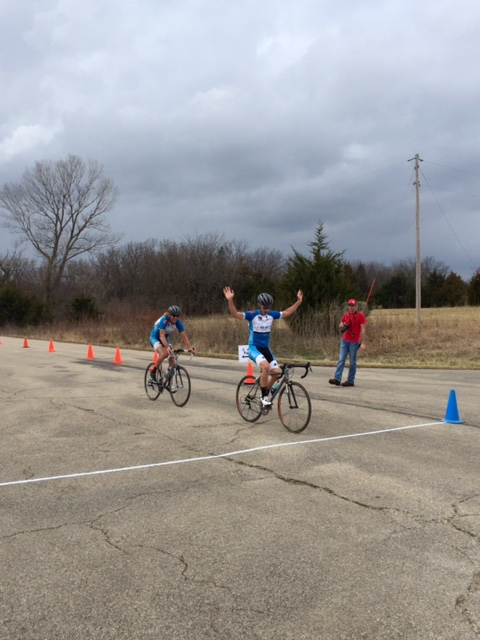 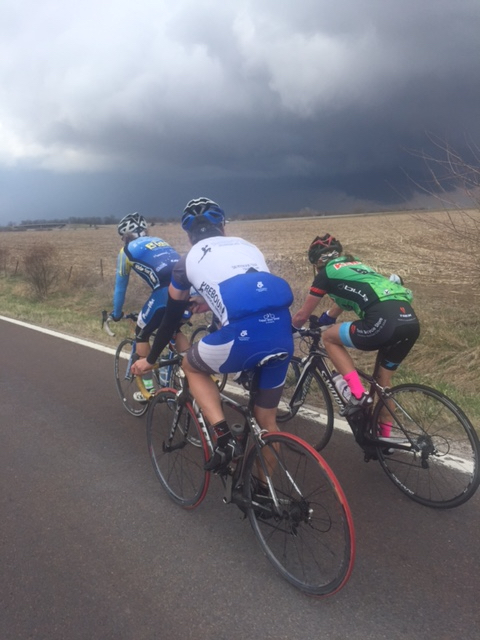 We got a little lucky missing the thunderstorms. 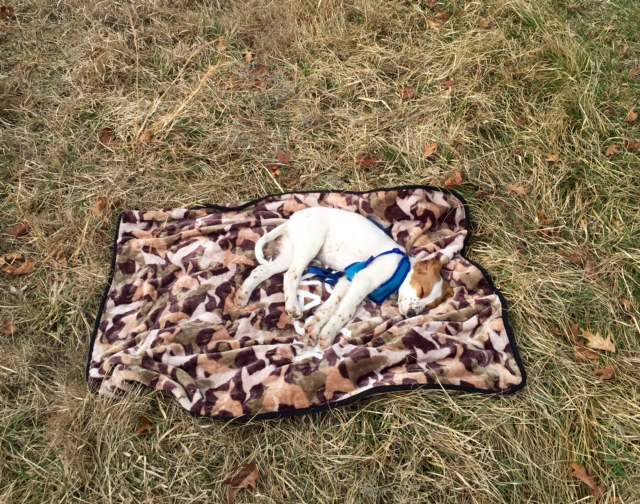 Tucker was done by the time we finished on Sunday. He is on a Duck Dynasty blanket. I’m not sure where that came from.

16 thoughts on “Not Another 5th Place”