It is just about 2/3rd’s the way through winter, which mean here in Kansas, the weather is very unpredictable.  It can either be 10 degrees, with snow and ice or 70 degree and sunny.  The normal high here now is in the upper 40’s.

Luckily for us, it is going to be way warmer than colder.   The forecast for the next 15 days doesn’t show a day with the daytime high less than 56, with a couple days in the 70’s.  This should, if the forecast is correct, get us to March, where the temperatures are always consistently better for riding.

But the problem with warm temperatures is high winds.  I’ve written a ton about riding in wind. I like riding in wind, but it plays havoc on a big group out training.  For me, it makes the ride interesting, like riding in the mountains on climbs.  There is always the downhill/tailwind, to look forward to.

Windy around here is over 30 mph.  When it is less than 20, I’d say it is closer to a normal day. Less than 10 is nearly never.   Most of the warm days the next two weeks it shows the wind over 30 with gusts.  Gusts are what really make riding in the wind unsafe.

The first time I went to the Olympic Training Center, when I was a junior, I went out for the first organized group ride of all the best juniors the US had.  Greg Lemond, Jeff Bradley, Greg Demgen, Ron Kiefel, etc.  I was just a skinny little shit from Kansas.

On the ride, we headed out south and the wind was blowing from the right, or west, super hard.  We were probably less than 10 miles out and all struggling in a 35 mph+ side wind.  All of a sudden, we rode by a small dip in a field and the wind shifted 180 degrees and blew from the East.  Mark Frise, from Wisconsin, was riding a little off the front, he was way strong, but the rest of us were 2 by 2.  When the wind shifted, everyone in the group fell, but me.  All I remember is all these guys laying in the roads and their cycling caps blowing into the field and disappearing.  No stinking helmets in those days.

Eddy B. was following us in a car and pulled up.  He decided it was too windy to train and that we should go back to the Training Center.  He told me to go get Frise and tell him we were going back.

By this time, Mark had a good minute on me.  I started chasing him and it took me nearly an hour to catch up to him and tell him that the “training ride” was over.  I was doing a full on time trial chasing him and was wasted.

Mark most likely half-wheeled me back to the USOTC.  He was much stronger than me then.

Anyway, I’m fit enough that the wind should be fine the next couple weeks.  If I could only get rid of this chest thing I have going, it would be welcome to make the training just that much harder.

Click about 4 minutes into this video to see how the wind plays havoc at the start/finish of this race. 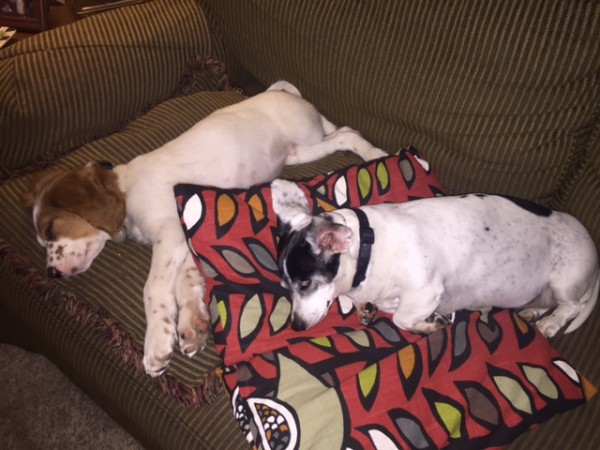 Pipsqueak is nearly bigger than Frankie, the dachshund.