How about this.  The Association of Professional Cyclist (CPA) is planning  to send a letter to the UCI asking them to reconsider their ruling of allowing disc brakes in all UCI road events for the 2016 season.  How about that for a twist?  This is just after the UCI announced, a couple days ago, that they were going to allow disc brakes in both the men’s and women’s pro pelotons, for “testing”, during the whole 2016 season.

In this article over at Cyclingnews.com, CPA president Gianni Bugno says that having different styles of brakes on the bikes in the professional peloton will be dangerous for the riders, and thus, is against it.  Wow.  I didn’t see that coming.

Right now, there are lots of different abilities to stop in a bicycle race.  At different speeds.  It would nearly be the same as saying that you can’t have guys in a bike race riding aluminum rims because they stop more consistently than carbon, especially in the rain.  I very much doubt that guys with regular rim brakes would be smashing into the back of riders that are riding disc brakes.  As soon as you can lock up your wheels, your brakes are strong enough.  Rim brakes do this in most situations.

And I, personally, have never been burnt by a disc rotor.  Or cut either.  And I’ve never met anyone that has.  I’m more worried about the “rotors” on the crankset that has sharp, pointy teeth.  Now those have gotten a piece of me quite a few times.

But I do agree with the service/wheel chance argument.  Having so many different types of wheels, especially with neutral support, is going to be a nightmare.  This is so much more true because I really don’t see how a fast wheel change occurs with disc brakes.

I have enough trouble getting my pads not rubbing on my MTB and I am using the best disc brakes in the business, XTR.  There isn’t much room for movement here.  I’ve stated this before, I don’t really see how a rider or a team is going to have all their wheels so perfect that the brake calipers don’t need to be adjusted to accommodate a different wheel.   I don’t think the industry has this addressed yet.  And until they do so, I don’t think that the brakes should be allowed in racing.

The Trek team is not taking disc brake bikes to the Tour Down Under, even though they raced them some at the Tour of Spain.  Man, what a hassle for the mechanics?  Trying to protect the rotors of all those wheels.

Anyway, the saga continues with the Pro rider’s union voting no, after the fact.  What do you think are the chances that the disc brake rule stays in place for the 2016 season? 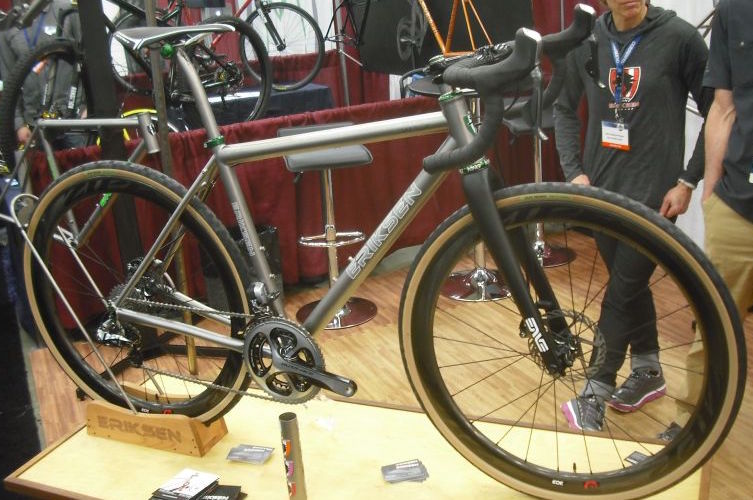 Kent Eriksen is already making disc brake road bikes, mainly for cross and gravel racing, so I’m covered, just in case the rule goes through. (Like it applies to me.)