I am listening to NPR and they just said the the UCI had approved the use of disc brakes on road bikes for racing.  That is a pretty unusual way to hear about bicycle racing rules.   I haven’t seen that in print anywhere, but I have to assume that is going to be true.

I don’t really like the whole idea of disc brakes on road bikes.  I actually pretty much hate it.  I don’t see it as an innovation.  I see it as a hassle.

Putting together bikes nowadays is a hassle.  There are too many options for everything to really keep track of what parts you actually need.  There are numerous different bottom brackets.  Same with front derailleurs.  Now brakes.

Shops can’t keep replacement parts in stock for everything.  So, you have to wait to fix your bike on any given day.  It isn’t like when you crash on a weekend, you can go down to the local shop and get the part you need to make your bike work the same day.

Specially, disc wheels are a hassle.  I don’t understand the wheel change issue.  It is nearly impossible putting a different wheel in a bike and not having to adjust the brake caliber.  So when you flat in a race, how is that going to work?

And the spacing is changing too.  135 to 142.  Thru axle, quick release. How many different rear wheels do you need to compete?  Too many.

Flying with a bicycle is a hassle already.  Now with disc wheels, unless you have a hard wheel case, you’re going to have to remove your brake rotors so the airlines don’t bend them up during travel.  I guess it is fine if you don’t have a 6 bolt mounting system, but it is still 2 extra things to do disassembling and assembling your bike during travel.

I haven’t ridden disc brakes on the road much.  But, nearly every time I pull my brakes, I stop. That is the case off-road too.  Catherine was all concerned about riding V-brakes on her bike in Chequamegon.  I asked her if when she pulled her bike didn’t stop?  She answered that it did. What more do you need?  Pull the brakes and the bike slows and/or stops.   Seems that simple to me.

The one upside I can see to discs on the road is getting predictability when braking on carbon rims.  Especially at speed, descending.  Or even better, at speed, wet.

But the majority of us, really aren’t racing down mountain passes, on carbon rims, in the rain. And if we are, we most likely understand the capabilities of our brake systems.  If you don’t, then you probably shouldn’t be doing it.

And how about having a bunch of guys in the field with different braking capabilities.  One guy pulls his brakes and stops in 15 meters, the next guy 20.  I guess it is no difference than someone with aluminum rims compared to carbon.

Plus, according to this article at Velonews last year, disc brakes on road bikes take up to 8 watts extra power, due to wind resistance.  Don’t think a tt rider or triathlete would want to use these. Or any of us.

So, all our road bikes are becoming obsolete once again.  If you don’t have a tapered steering column with disc mounts, you might as well sell it on eBay for 10% of the price you paid for it.

Maybe it’s an upgrade.  Just maybe.  But the hassles outweigh the benefits, in my view. When they solve the wheel compatibility and ease of wheel changing issues, then I’ll reconsider my stance. Until then, I’m sticking with my views. 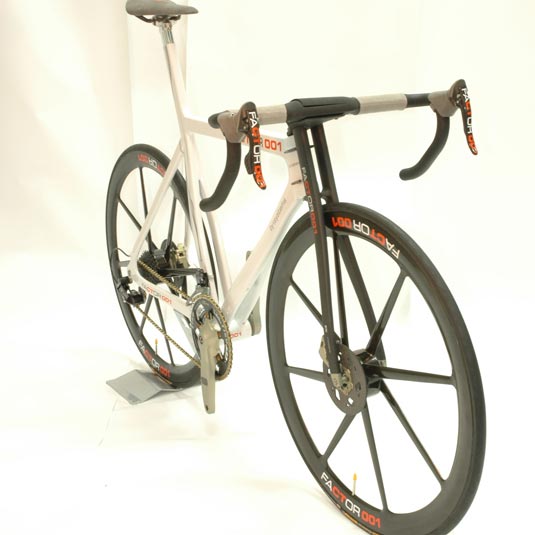 You can get this bike, with built in sensors, along with carbon disc rotors, for a mere $27,500.