Yesterday, like I posted yesterday, I woke up to the announcer for the Junior Men’s TT.  And it kept up until nearly 5 pm, when the last women finished.  So it was going to be tough trying to organize the best use of my time.

There is “hardly anyone here” and I probably saw 100 people that I personally know.  I was talking to the police, which there are a million of.  I asked the officer how many cops were working and he said all of them, plus a ton more.  That a year ago their redbooks, which I guess is vacation time, was locked out this week.  It is amazing how much of this city they have shut down to race bikes.  A 10 mile loop yesterday, that went over the river on a major bridge, pretty much cripples everyone else’s ability to move around much.  It is really impressive.

Most the people walking around the start/finish area are speaking foreign languages.  Lots of people wearing their crazy home country costumes.  It has a real European feel.  Even the breakfast buffet in the Marriott seems more like something from Europe.  There is a ton of fresh fruit, raw fish, cheeses etc.  Plus eggs and potatoes.  Europeans don’t understand why we eat potatoes for breakfast.  I don’t get what they don’t get, potatoes sometimes taste good in the morning.

I did a couple rides yesterday.  Downtown Richmond, for cycling, might be challenging.  Especially with the course blocking off so many ways to get around.  I might meet up with some locals one morning and do their ride.  That is usually the best way to get the lay of the land.

The women’s time trial was crazy close.  I thought Kristin Armstrong had one the event, but she might have gotten cheated by the wind.  She started 2nd rider off and her time held up for hours.  But the 2nd grouping went off a couple hours later and the wind died down a bunch.  She ended up getting pushed all the way back to 5th, 21 seconds back.  1st through 4th were only separated by a mere 9 seconds.  She needed to finish on the podium to automatically qualify for the Olympic Games next year in Rio.  That was a drag for her.  I saw her late last night in the hotel lobby and she was bummed.  She said she is going camping next week and is going to try to forget about it.  I don’t understand the seating process for the race, but it hurt Kristin badly.

I had an interesting dinner/wine meeting last night. It wasn’t really an interview, more like a catching up with a friend.  We’ll see how the story turns out.  Trudi walked over and ended up having wine with Eddy Merckx last night.  Seems surreal, but normal at the same time.  Funny how that is.

Today is the Elite men’s TT.  I have to pick Rohan Dennis.  He’s had a great season and I guess he was ripping the legs off the BMC team during their TTT victory, so he obviously has great form.  Plus he hung at altitude, in Colorado, since the Pro Challenge, and thus, can’t really have any jet-lag from flying over here from Europe.  I’m hoping Taylor Phinney, US, finishes in the top ten.  That is an automatic qualification from the Olympics next year for men.  That would be a great result for him considering he is just back from injury.

The men’s start isn’t downtown, it’s a ways out and they ride into downtown and to the finish, not laps like the other categories.  I’m going to ride some, and then head out to spectate. 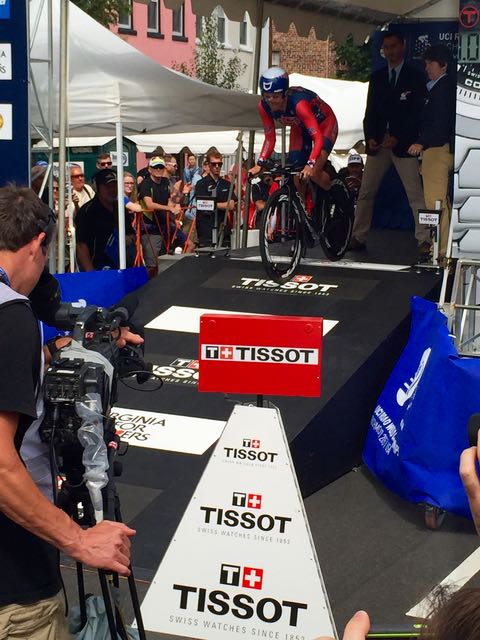 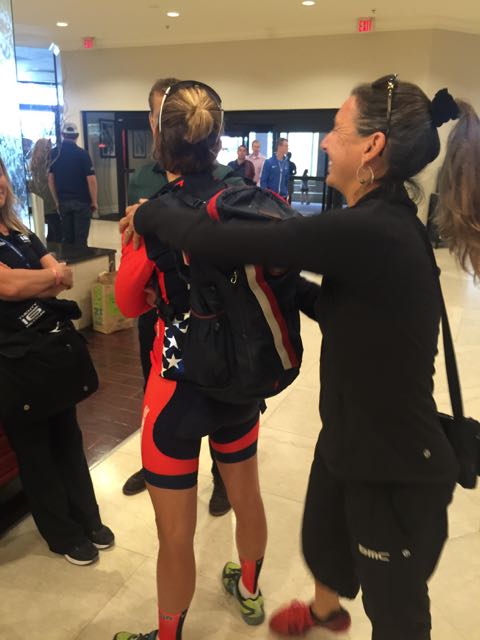 Trudi giving Kristin a hug after the race. She needed it. 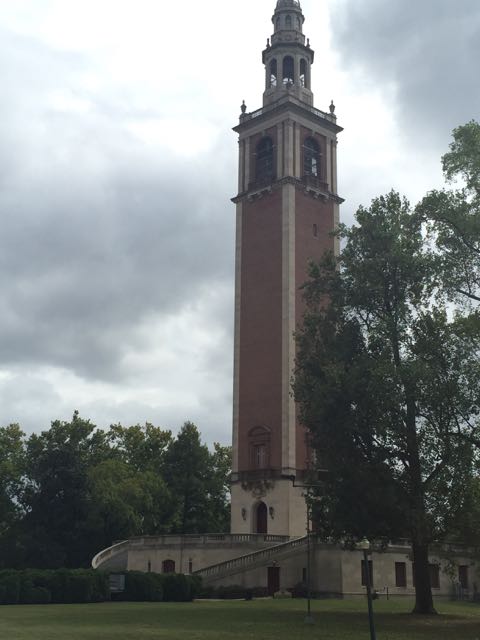 The City of Richmond is very old and has some interesting architecture. 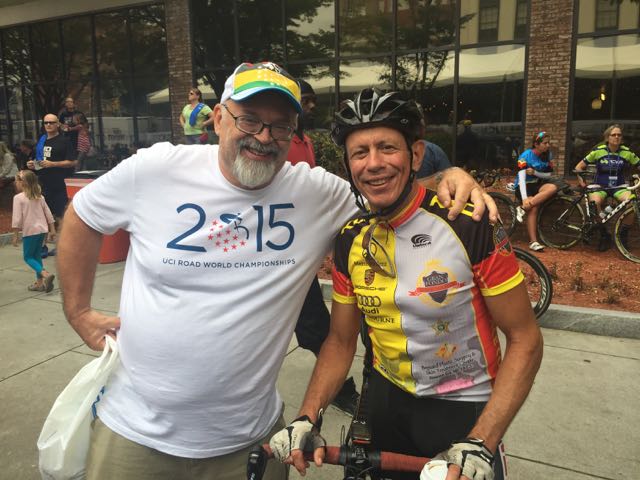 David Hiatt and Hans Selvog, juniors from back in the LeMond days, meeting up here to spectate. It was super seeing them. 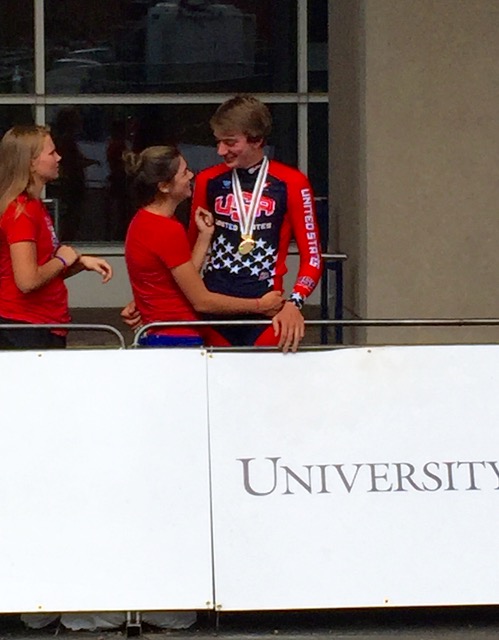 I thought this was a great moment. I think this is Brandon Mcnulty, a junior that finished third in the time trial, after the awards ceremony. 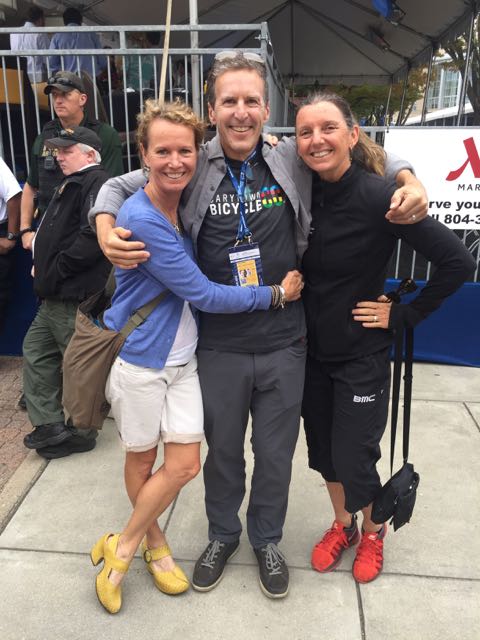 Davis Phinney, who is here supporting his son Taylor, with Suzette and Trudi at the finish. 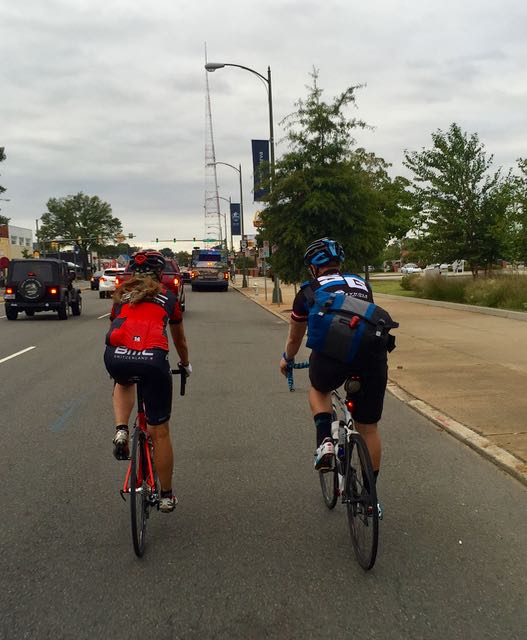 Trudi and my friend, Jeff Unruh from Topeka. Jeff was volunteering as a course marshall and we rode him partially back to his hotel. 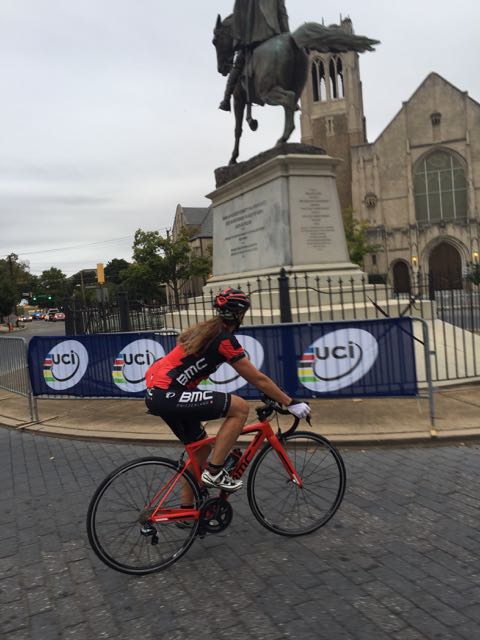 Trudi just got a new BMC Di2 bike and yesterday was it’s maiden voyage. Nothing like the first ride of a bike being on the World Championship course.