Wow.  That is the word to describe my feeling after yesterdays Dirt Fondo in Durango.  I don’t think I was prepared for the ride mentally.  You know how you sort of predict how a day is going to go, even if you don’t really know much about what you’re going to do.  That was the case yesterday.  I thought I was going to go ride around Durango on a bike tour, but it wasn’t really that.

The ride had a few hundred people and it got a police escort through town.  I was talking to John Tomac about what he’s been up to.  I was surprised that he said that he was planning to do the 50 mile lap.  He’d been travelling the last 6 months with his son Eli, so that isn’t conducive for long MTB’ing.

As soon as we started climbing, it was game on.  Todd and Troy Wells took off.  Then Howard Grotts, Keegan Swenson, Ben Sonntag and a bunch of other fast guys joined in.   I wasn’t prepared for that.  I’d just eaten a huge breakfast of eggs, waffles etc. and I had no idea we were going to be racing the whole fondo.  I was riding next to Ned and said WTF just as he said he was done and pulled the plug.

I kept climbing and climbing.  Eventually I was riding with a few guys along with Travis Brown.  I told Travis I wasn’t prepared and he concurred.  My spare tube bag, behind my seat, kept hitting my leg.  I had a toe strap around the bag, but it kept loosening up.  I stopped and put it back on and then hooked up with Ned.  We rode the descent together and then the next couple climbs.  My bag kept coming loose so we stopped again.  When we got to the split for the 30 mile ride, Ned told me he was going to go short.  I was bummed.

Anyway, the course kept getting harder and harder.  Super steep climbing, like granny gear and gnarly descents.  It was super technical.  Like if you weren’t a current racer, or a real fit ex-racer, then it was going to be torture.  And the day kept heating up.

I started stopped at all the aid stations to drink.  It was pretty exposed and in the lower 80’s, but it seemed way hotter.  Eventually I got hooked up with a few kids from Fort Lewis, along with Howard Grotts.  They were riding a nice pace, but it was short-lived.  They stopped and waited for some of their friends.

I did most of the rest of the ride alone.  The miles were going pretty slow.  The climbing never ceased and the descending never got easier.  The one upside to the day was that the course wasn’t 50 miles, but 42 and change.  I was so happy when I got back to the bike path and to the finish early.  I was pretty wasted.  My arms were super sore, I actually had blisters on my hands, even though I was wearing gloves.  I fell twice and both my knees were kind of swollen.

I drank so much Coke I was a little bloated.  I normally don’t drink Coke, but what the hell.  The whole way, when I was feeling bad, I kept reminding myself that Tomac was out there, riding the full distance with no form.  I assumed he was much worse off than me, like that is some consolation.

I talked to Rishi and Mike Kloser after the ride.  They were both riding with John and they said he was hurting after about 25 miles,  But he did the whole distance.  Mike said it was great following him down descents, just like old times.  I wished I would have ridden with them.

All that being said, the event was super.  Durango probably has the best trail system of any town in the United States.  The city itself is so supportive of cycling it should be the city that every other one in the country tries to emulate.  There were tons and tons of volunteers.  The feed stations were  super, thus the cold Coke consumption and after the event they had loads of food, awesome burritos, drinks, beer flowing, it was great.  Everything was top notch.

There were a ton of guys and gals that did the Worlds in 1990 here.  The full women’s podium were present, and 6 out of the top 20 in the men’s race,   Plus, the winner of the men’s downhill and lots of others.  It was a nice reunion.

There was a gathering last night where everyone got to catch up.  Tom Moran, super photographer, was there and had the riders get together for a few photos.  I’ll post one as soon as Tom sends it.

Overall, it was great.  I’m going to hang here today and then do the full drive tomorrow.  Then pack up and head straight up to Cable on Tuesday for Chequamegon this weekend. .  I kind of wish I would have planned better and could head over to Interbike and watch Cross Vegas Wednesday night, then fly to Minneapolis, but I didn’t, so I’m doing the two full days of driving. 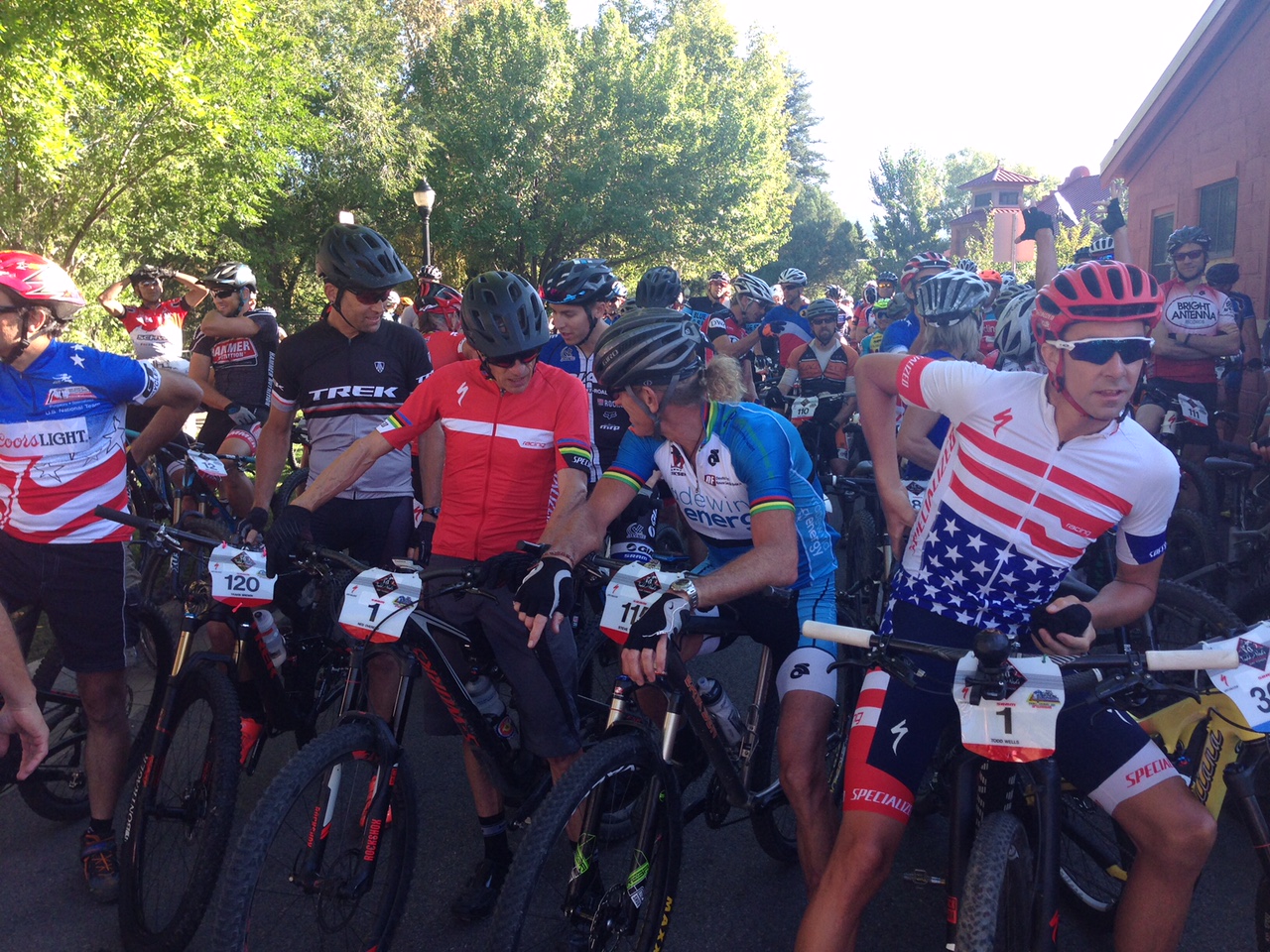 Talking to Ned at the start. Todd is next to me wearing his National Championship jersey. 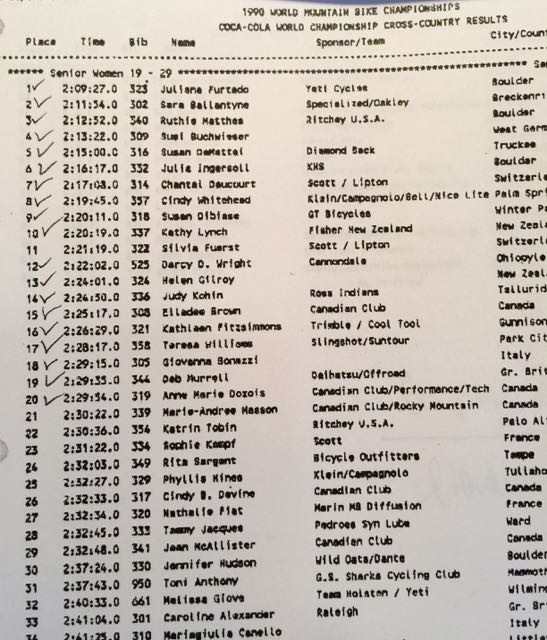 The women’s results from 1990 Worlds. 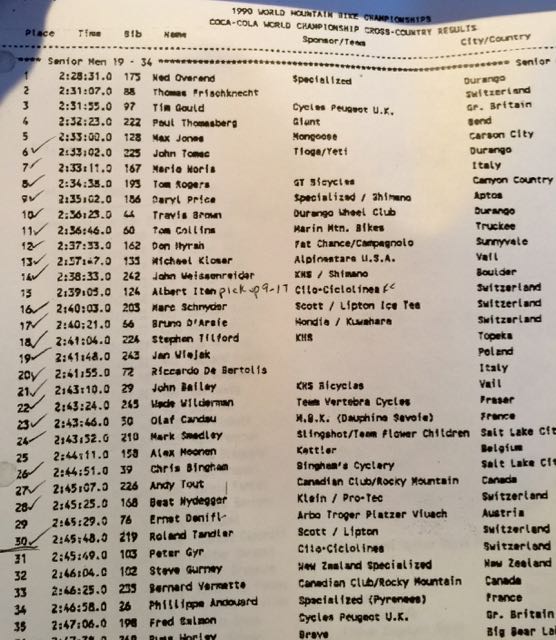 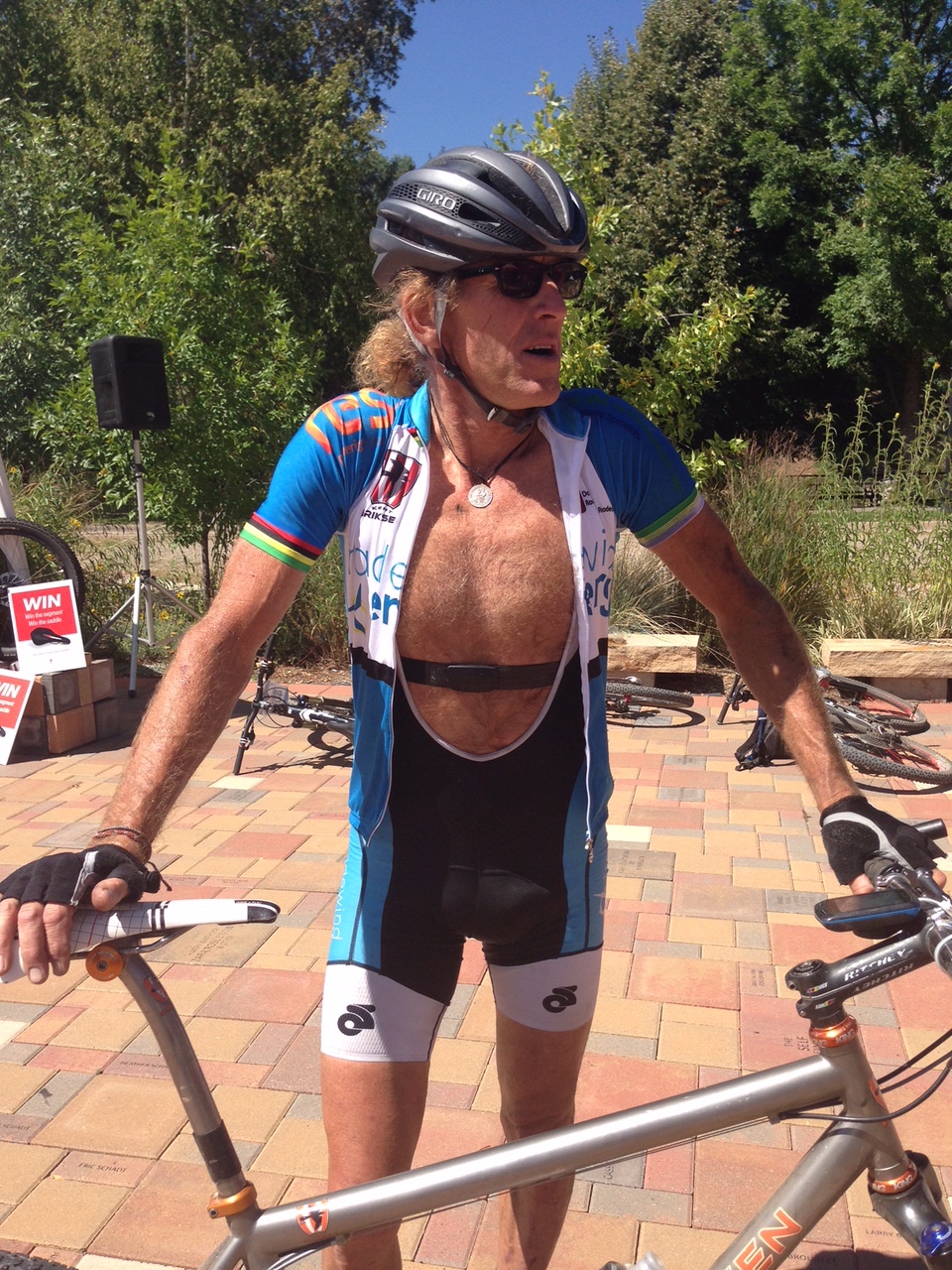 After the ride I was a little shell shocked. 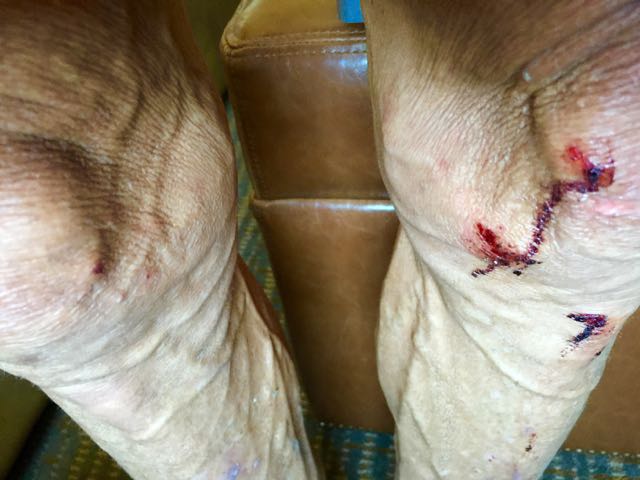 Both my knees were hating me. 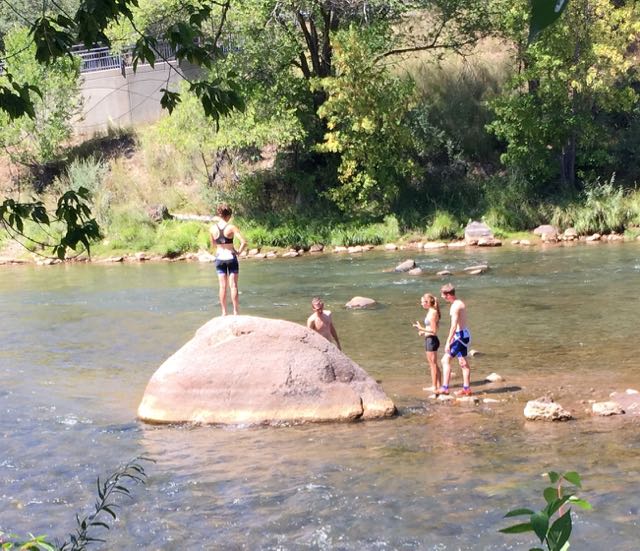 Carley and Libbey Enderbe, from the Rivers Eatery in Cable, after the ride, enjoying the Animas River. They go to school at Fort Lewis and were cooling off after the fondo. 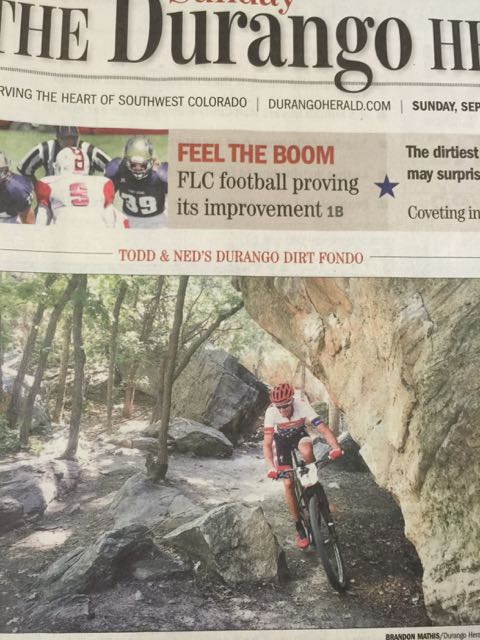 The front page of the Durango Herald this morning. They really support the sport.