I just finished watching the finish of the Tour of Spain and it never ceases to amaze me how badly guys work in breaks at the Grand Tours.  It is like they have never raced bikes and have no idea how to make a group go faster and ride efficiently.

When I’m in a break, a break that I want to succeed and work smoothly, I do everything in my power to make that happen.  I do that by trying to get the riders into the correct order where everyone is contributing their most for the break to ride smoothly and fast.

And when some guy is pulling through too hard, or we start rotating the wrong direction after turning, I will immediately say something to try to correct the mistakes.  Not directing or anything, just casual conversation saying we need to pull left or if a guy is pulling way too hard for the rest, I’d say something like, “maybe pull a little longer and slow it down a tad”.

This is imperative if you want a group to ride in an efficient manner.  But, watching the break in the “Pro Tour” events, it constantly bewilders me how it doesn’t seem like anyone in the break cares what the other riders are doing.

My first observation is that breaks tend to always want to ride double echelon when they should be riding single.  I’ve posted about this before.   You need more than 4 or 5 riders to do a rotating paceline.  I’d say 7 would be the minimum.  Guys always try to do it with 4.

With 4 guys, you end up being in the wind twice as much as if you were riding a single paceline. 50% of the time compared to 25%.  I don’t know what these guys are thinking?    I’ve been in many races where a small group tries to do a rotating paceline and I put an end to it immediately.  I do this by not participating.  Take one guy out of a 4 riders rotation and it is impossible to do a rotating paceline.  Then I join back in a continue pulling.  It is as easy as that.

Too many guys train for power nowadays and don’t understand the fundamentals of bicycle racing.  Sometimes it seems like the sport has evolved into a bunch of unbelievably strong robots with no ability to adapt to ever changing conditions.  And that is what cycling is all about-Being able to adapt to your surroundings at all times. 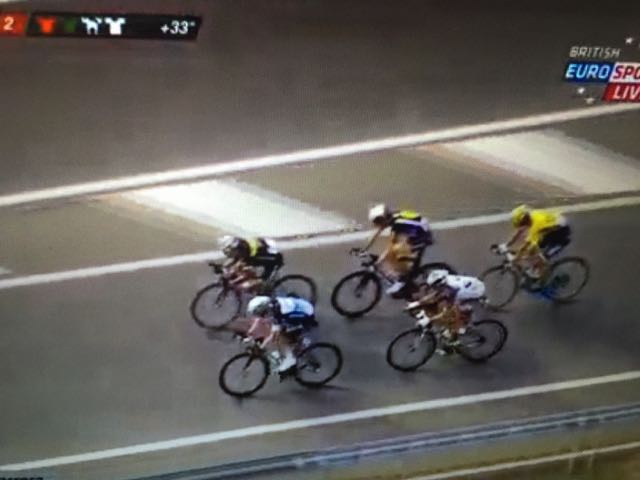 This was with maybe 3 km to go in today’s stage of Tour of Spain.

60 thoughts on “Riding Smart, Staying out of the Wind”