I’ll start this by saying, in a perfect world, I think, maybe Jonathan Vaughters would be a good benevolent dictator of the sport of cycling.   Notice the words I think and maybe.  Who knows?

I saw this Velonews article that pretty much just said, let’s give Jonathan a chance and “leave him alone for a bit.”   In the article, the author, John Brady wrote, “This team has been racing since 2005, and Danielson is the first doping positive. One in 10 years. Vaughters founded the parent organization in 2003 — when doping was at its peak — with the specific mission of racing clean. Vaughters isn’t the only person fighting drugs in cycling, nor even necessarily the most effective, but I challenge you to point to a current team manager who has been more vocal about cleaning things up.”

I get it, that was Jonathan’s intention, cleaning things up.  But Jonathan had/has to walk a very fine line between trying to adhere to his mission statement and running a successful professional cycling team. In reality, a World Tour team with no results is a team no more.

All this is understandable.  But the deal is that no one forced Jonathan into this role of,  “I’m managing the clean team.”   Somehow he decided that was his destiny.  But the way he has gone about following his declaration is pretty questionable, in my opinion.

Jonathan made this personal mission statement, he’d probably not call it that, but his intention to help rid the sport, and of course, his team of doping.  He did this actively over quite a few years, with lots of different methods.

I think his most credible method was latching onto Travis T. Tygart, CEO of USADA, the man who brought down Lance.   Associating himself with Travis legitimized Jonathan, in the media, as a man against doping.  Good move.

This and many other of his actions made him very popular with the cycling fans.  We were all sick and tired of  all this doping shit detracting from the beauty of the sport.  He was voted Cyclingnews fan favorite, for best non-rider on twitter, three years in a row.

Jonathan talks a great talk, but I don’t think he walks so straight.  I’ll give you my observations how I came up with this.

It probably all started with me writing about Tom Danielson a couple years ago.  This wasn’t good for Jonathan’s PR stance.   When Jonathan “quietly” released Tom’s doping past, he was ready for the deluge.  I think he must have spent 20 hours a day, for a couple of weeks, everywhere on social media, answers questions and leaving comments on tons of different forums.

And a few of these comments were concerning my observations.  He made a statement about how ridiculous and unfair it was for me to imply that Ryder Hesjedal was a doper just because he rode for one season on the Postal Service team.

This bugged me.  I knew Ryder Hesjedal was a doper because I had personally watched him massacre tons of very talented cyclists on his meteoric rise to the top of the sport of MTB racing.  Everyone that was participating in the sport watched, as whole nation of Canadians became superhuman overnight.    It was a joke.

I was a little more bugged when The Twisted Spoke wrote  “A Rebuttal to Steve Tilford hatchet job on Vaughter.”   I don’t think I did “a hatchet” job on Vaughters.  I think I wrote exactly what needed to be said at the time.  They said I was “quibbling” about the numbers Jonathan wrote in his NYT article.  If you’re saying numbers, lets say the correct ones, or at least numbers that truly reflect reality.  (I wonder if he feels the same now?)

Jonathan was using Ryder as an example of how you can win a Grand Tour clean.  I have no idea if Ryder won the Giro clean, but after Michael Rasmussen outed Ryder and a couple of others, Ryder’s Giro win definitely has an asterisk next to it in many people’s minds.    And in my mind, once you dope, you are always a doper.  The residual effects of PED’s have been shown to last a very, very long time.

Anyway, I must have bothered Jonathan enough that he called me and told me I needed to come to watch Tom Danielson and CVV do their pre-Tour testing in Denver.   Jonathan is a good guy and it was enjoyable talking to him.

I flew out to Denver and watched the testing.  And there is nothing I can report about that, other than Tom rode “test record” up to 6.5 watts/kg.  I’m not an exercise physiologist, so I have no idea whether I was watching normally aspirated testing or super charged testing.  The doctor, Iñigo San Millán said for sure, Tom’s results were clean, low hematocrit, etc.

What bothered me is that when I was talking to Tom and Christian, I asked them how often they did this testing and they said virtually never.  Like maybe three years earlier.  I had assumed, that Garmin, being the clean team would be doing internal testing and blood tests all time to keep track of their riders.  Guess not.

So, I got nothing from the observation meeting other than it did nothing to give me any information about the inner workings of “the clean team”.

Jonathan has stated many times that he had/has no problems giving riders with a doping history a 2nd chance.  He did this with many riders, most notable, David Millar.  But also, CVV, Dave Zabriski, Tom of course, Thomas Dekker and Ryder.

He says that the generation was forced into doping, so as long as they come clean when his signs them, that they can still race, now clean.

But, here is a problem that Jonathan has.  He knows that these riders have doped and lies by omission before their issues are known by the general public.

Let’s use Tom Danielson as an example.  Jonathan wrote an article for Cyclingweekly, back in 2009, that says that Tom is 20% Eskimo and has a unique physiological metabolism, he hasn’t used all his abilities.   His direct quote is – Tom Danielson in 20 per cent Eskimo in his heritage, and this probably contributes to what I can only describe as a unique metabolism.

He does this, knowing full well that Tom got to this point in his career by doping.  When Jonathan outed Tom, he wrote, “So, Tommy D… Here’s a guy that has used o2 vector doping, and with some success [Oxygen vector doping refers to increasing oxygen delivery to the muscles via increased hemoglobin, ed.]

Jonathan said he watched Tom’s progression in the sport, as I did.  Jonathan wrote is 2009 – “He was a young, unknown rider who came out of nowhere”.  It was obvious to me, and many, many others, how this occurred, by doping.   But, here is Jonathan, writing that he has a unique metabolism and that it just needed to be tweaked.  He wrote this with the full knowledge that Tom had “some success” with o2 vector doping in the past.

Same with Ryder.  He goes onto forums and tries to discredit my credibility by saying how stupid it was for me to imply Ryder should be considered questionable/doping, when he knows full and well that Ryder took drugs earlier in his career to get to the point of winning the Giro. He has no problem letting the cycling media, and us, use Ryder as an example as how the sport is so clean now, clean enough to win Grand Tours clean, even though his knows it to be false.

I’m not sure it is exactly lying.  It would probably be more accurate described as lying by omission.  Or maybe misdirection.  I’m not exactly sure that is best to describe it other than it was and is wrong.

It you want an example of a clean team, a really clean team, the maybe look at Optum.  Here is an article on them by the Outerline.com.  In this article, Charles Aaron and Jonas Carney give their views and actions concerning doping in the sport.  They walk the walk, not  just talk the talk. (And let’s not get into a Zirbel discussion in the comment section.)  These guys don’t have anywhere near the voice of Jonathan, but they are definitely practicing what they preach.

I do agree with the original Velonews article that the sport is better off with Jonathan around.  I just wish he would be more honest in his actions.  Credibility is defined as the quality of being trusted and believed in.  When you release information, for your benefit, when you chose, for damage control, then the credibility is lessened.  We don’t need the spokesman for clean cycling, worldwide, to lack it. 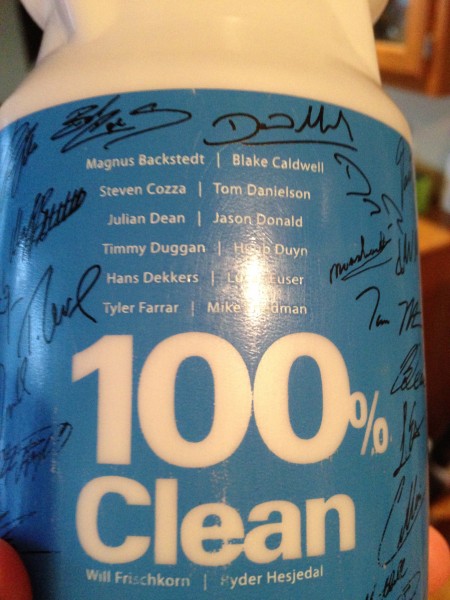 I got this photo from an employee at Garmin. He said – It’s actually a Team Garmin water bottle from a year or two ago. I work at Garmin. The team rolls through after the Tour of Colorado and rides with us. We all get these cool, but factually incorrect, water bottles and stuff like that. 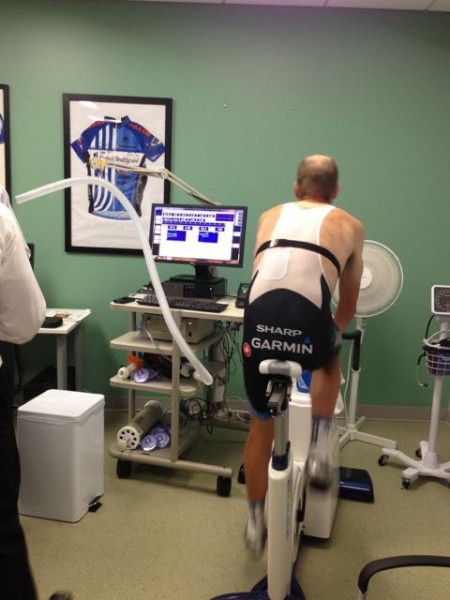 Here’s Tom doing some physiological testing before the Tour in 2013. 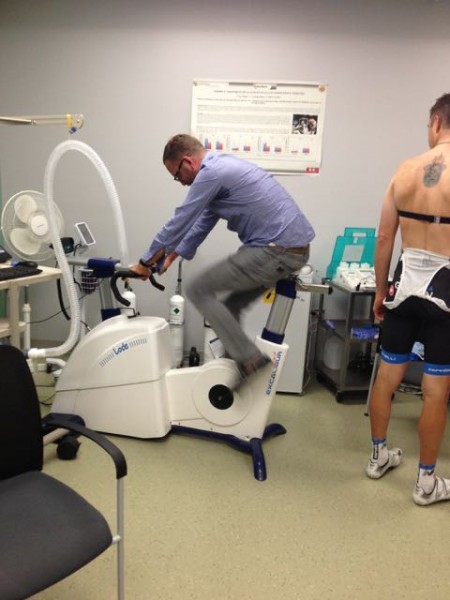 And Jonathan testing out the ergometer.

40 thoughts on “Jonathan Vaughters – Credible or Not?”