Yesterday, Bill and I were talking about Francisco Mancebo and Bill had no idea where he disappeared to after his stint here in the US.  The clean team, Rock Racing, was the first to bring him over to pollute the US domestic scene and then he just decided to hang around. Competitive Cyclist, the Kenda hired him.

Anyway, he eventually signed a contract to race for SkyDive Dubai and there he disappeared for the last couple years.  I thought that was perfect, having to hang around in the middle east to not race.  I guess that didn’t work out too well because in an interview, he said his back up plan was to change disciplines and race MTB marathons.

I’ve written about Mancebo a few times.   After finishing 3rd in the Tour de France, he got caught up in the Operation Puerto deal and instantly announced his retirement.  But, he couldn’t stick to that decision and finally ended up here to “cherry pick” the US NRC series.  He smeared all the domestic guys for a couple years and then poof, gone again.

But, he seems to have made his way back again.  He is currently racing, and winning, the Cascade Classic in Bend Oregon.  He won the first stage yesterday, which finished on a 22 km climb.

This race he is currently riding for Canyon Bicycles.  He is probably guest riding for these guys, but no matter what the relationship, I don’t get why anyone in their right minds let this guy wear their jersey.

He was the winner, number-wise, with 20 bags of blood stored during the Puerto fiasco.    He confirmed the truth in Puerto by instantly announcing his retirement as he left the Tour de France, along with a bunch of other guys, including Jan Ulrich, Ivan Basso and Oscar Sevilla.

Now he has returned to his sanctuary back in the United States.  And to his winning ways.  I don’t understand the mindset of the US teams that welcome Francisco with open arms.  These guys are just announcing to the sport that they don’t give a shit about doping, because this guy has a doping past next to none.  He never served a doping suspension, so using the argument that he can race because he has served his time doesn’t apply.

As long as guys like Francisco Mancebo can find rides here in the United States, our sport, domestically, has no chance of getting out from under the dark cloud of doping. 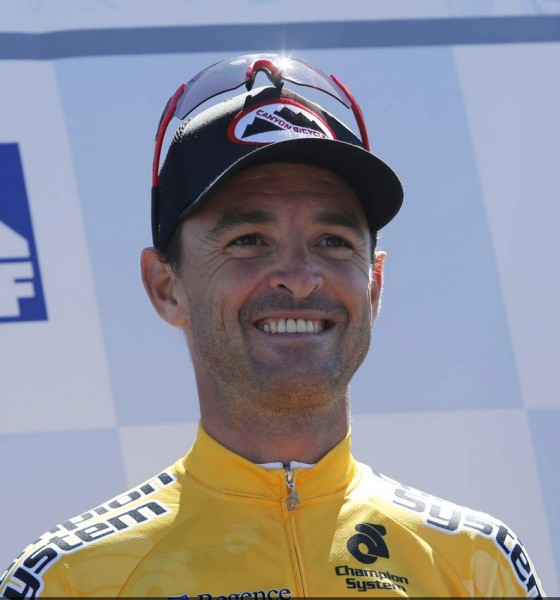 Francisco all smiles in his leader’s jersey at the Cascade Classic, which is going on all week long in Bend, OR.

32 thoughts on “Mancebo is Back”