Yesterday was terrible.  It wasn’t horrible, it was just terrible.  I’m not sure where to start.  It is late, real late Sunday night, early Monday morning now.  The race was at 2:15 and it was 75 minutes, I guess.  That was nearly 12 hours ago.  Man, a lot can happen in 12 hours.

Brian Jensen called and decided he wanted to try to blow off some steam after his Dirty Kanza fiasco and we stopped in Lawrence to pick him up.  It was the first time he’s raced his road bike this year.

We got to the race and warmed up.  Then the race started.  Easy course around the stadiums where the Chiefs and Royals play.  No big hill, no tight corners, not really a course that I like that well.  The sprint was 500 meters downhill with a slight tail/crosswind.

I felt okay.  Pretty good actually.  It seemed like it was going to be a field sprint, but you never know.  I kept trying to get off the front, but it seemed like I was pretty marked.  At least it seemed that way to me.  Lots of guys chasing me and when they got on, they wouldn’t pull, even if I kept pulling for awhile to give them a break.  They always said they were working for someone else. Man, I hate that line.

Brian and Bill both got in a few moves, but they never went anywhere.  Then two guys got away with 4 or 5 laps to go.  I wasn’t going to chase them and no one else seemed to be too interested.  Then two laps to go and it started getting a little squirrely.  Faster and everyone trying to move up.

On the last lap, I planned to be as close to Lee Bumgarner.  The guy is the perfect lead out downhill.  He is big and powerful, like 2000 watt powerful.  I had talked to Garrick Valverde about him and said he should start his sprint on Lee.  I was floating behind Garrick and when Lee jumped to the left, Garrick lost his wheel.

Shadd Smith jumped to the right and around the last corner he jumped with Garrick on his wheel, then Brandon Krawczyk, 3rd from the day before, Lee, 2nd from Saturday, then me.  The two guys were right ahead and I was focused on staying on Lee.

Like I said earlier, it was downhill and a slight tailwind.  Garrick jumped by Shadd, then Brandon went and Lee got beside him.  I was still behind, hardly pedaling, still 200 meters from the finish.  I couldn’t believe it.  Still fresh with everyone in the wind in front of me.  Then disaster.

Someone on my right got into trouble, just when I started winding it up to get off my seat and sprint. Carnage.  From the left, someone came over into my rear derailleur and bam, done, no derailleur.  I was already going over 40 and just coasted the last 150 meters and still ended up 19th.

I guess there were a lot of guys on the ground.  It was a high speed fall.  I hoped everyone was okay.  I went to the car and Trudi came back and said that Bill was on the ground about 300 meters from the finish.  He’d crashed 3 laps to go.  I ran down there and he was sitting on the grass with a couple paramedics helping him.  I asked him what was wrong and he said he couldn’t breathe and his ribs on his back were killing him.

The ambulance came and they checked him out.  I talked to him some and decided to take him to the hospital ourselves.  I figured it would save the ambulance ride cost.  We went to a local hospital and it worked out amazingly.

We got him checked in and the doctor ordered x-rays.  They came back a collapsed lung and two broken ribs.  They called a pulmonary doctor and about 15 minutes later he came in wearing jeans and a t-shirt.  They guy had a small kit and pretty much poked a hole into Bill’s chest, stuck a tube into it and then vacuumed the air out from between his lungs and rib cage, I guess.  It took about 10 minutes.

They sent Bill back up for another x-ray, which was good, lung back, and then we got some pain killers and drove back to Topeka.  It took 4 hours, but he didn’t have to stay the night in the hospital and on Tuesday he has an appointment for another x-ray, and if that is good, the tube comes out and then it’s just the bad ribs for 6 weeks.

It was a very bad crash, but it could have been much worse.  He hit a curb at 90 degrees going around 40 and flipped over, but landed on thick grass.  There was a sidewalk just a couple meters further.

Brian is probably thinking about retiring from road racing again.  It was a super ugly last lap.  He didn’t fall, but most likely witnessed a ton of guys laying around.

I spent most the night trying to piece a  Di2 rear derailleur back together.  I have a couple Ultegra ones, that are toast, but finally just used JB weld and fixed my Dura Ace one.  I used a couple bolts from the Ultegra parts derailleurs too.

So, it is nearly 2 am and I am still planning on heading out to Vail tomorrow morning as early as I can get moving.  Maybe Trudi will drive some and I can sleep.  Kind of mentally spent from yesterday.  Bill can’t go to altitude with his collapsed lung issue.  Like he feels like it anyway.  Bad luck.

I have a Garmin and pair of Oakley glasses that were given to me after the crash at the finish.  If anyone out there knows who is missing either, just email me at Steve@SteveTilford.com. 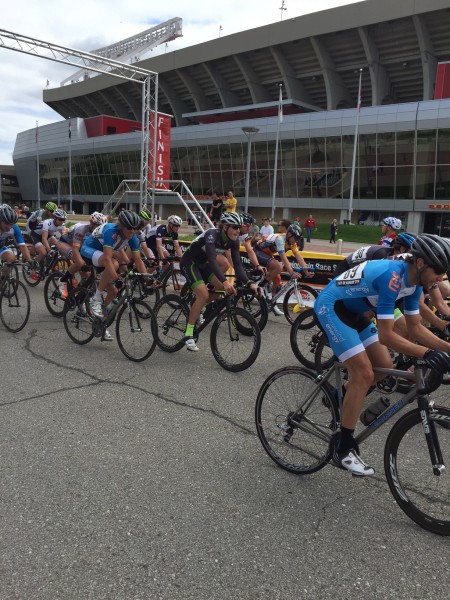 Brian, me and Bill kind of close together. 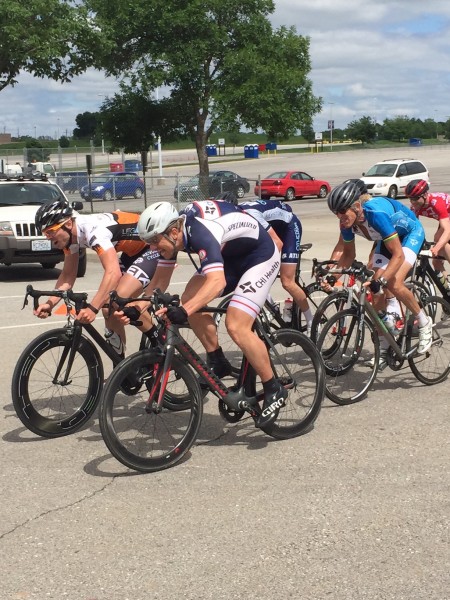 About 200 meters from the finish. I felt I was in great position and hadn’t really taken much of a pedal stroke in a couple hundred meters. Sprinting for me is about position. This time it sucked big time though. 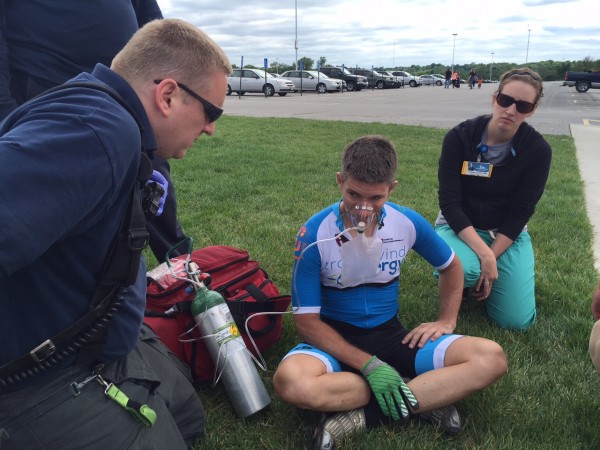 Here’s how I found Bill after the race. 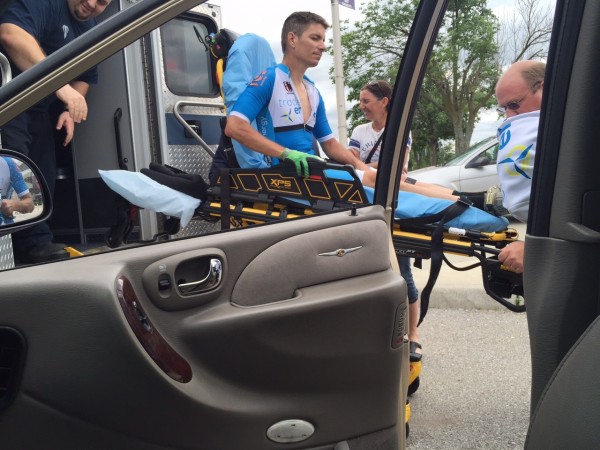 Transferring from the ambulance to my van. 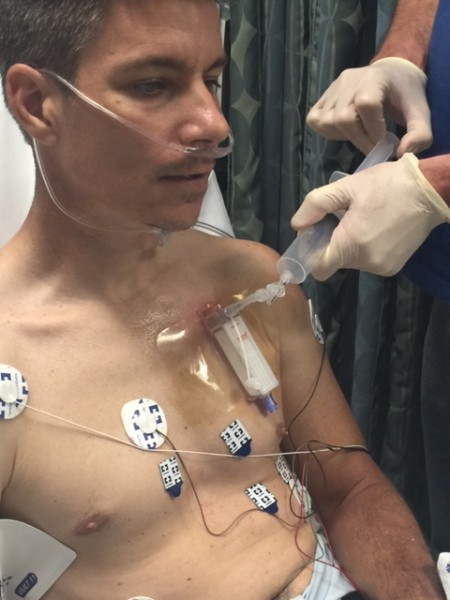 Sucking the air out from behind his lung. 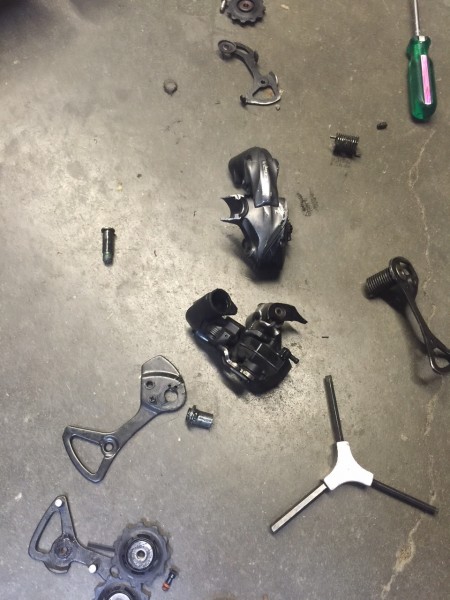 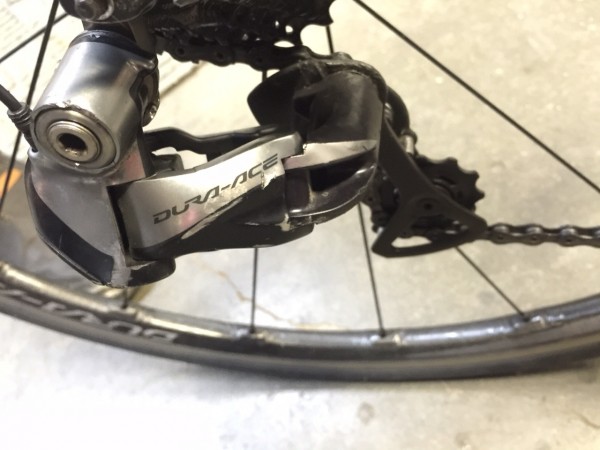 This will work for a while. 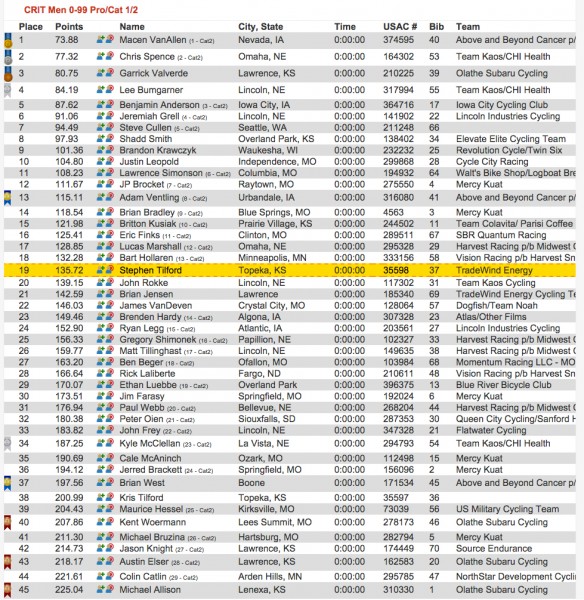