I was riding with my brother and started thinking about early life bike racing and realized that this is the 40 year anniversary of riding the Tour of Kansas City for us.  I rode the race back in 1975 as an intermediate.  It was a huge event back then, an Olympic Developement Race and the field was stacked with National Team members, guys on the Olympic Team, etc.  Actually half the 1976 Olympic team with Wayne and Dale Stetina, plus local Mark Thompson.  Tom Schuler duked it out with Wayne Stetina one year, it might not have been in 1975.  It was a long time ago.

Anyway, the race has been going on for 52 years straight, some kind of record.  I haven’t done it 40 times, but I’ve raced it a lot.  And Cliff Drive is one of my favorite courses.  This year I thought it might not work out so well for me, being only 75 minutes.  We’ve done as many as 75 miles on the course, and it is normally over 50 miles.  Plus, the race has historically been in early August, so heat plays a huge roll.  This was going to be like a hard criterium.

The course has a couple climbs on about 3 miles.  It is  a super fun course to race, with a tight u-turn and then a sweeping 40 mph corner just after.  The finish hill is very hard by for a “criterium”.

Bill and I rode 40 miles yesterday morning, trying to get our legs feeling good.  Seemed to have worked.  We drove the hour over to KC and went to The Plaza, got some coffee on Main St., then rode the 10 miles over to the course.  It was super fun.  I love riding to races through places I haven’t seen before.  We ran into an old friend, Brian Duff, who was on a cruiser, and he escorted us over to Cliff Drive.  We rode through some pretty tough neighborhoods, lots of graffiti and boarded up houses.  But, the houses are beautiful, all rock and stone, could be worth a fortune in some other era of the future maybe.

We got to the race and realized the start time wasn’t 6:30 it was 7.  Anyway, the race started and I felt alright, which is good now.  I need so many more race miles to be riding up to my standards and that is what I’m doing, trying to get in race miles.

The first couple times up the finish hill I felt a flat.  But it got better.  I could tell, by the speeds, that after about 1/2 the race, guys were starting to just survive.  I was feeling better, but not super.  Eventually a little group got away with Janne Hamalainen, a super strong master from Tulsa, who just finished Killington Stage Race, plus Michael Allison from Olathe Subaru.  I know both this guys, Michael just won a 1/2 road stage at Joe Martin and Janne, like I said above, is a really good rider.  They started pulling away and maybe got up to 30 seconds max.  Michael finished 2nd in the time trial and had a bunch of team mates at the front of the field.

I wasn’t much into racing for 3rd.  So, on the back hill I jumped from pretty far back in the field and didn’t look back for a bit.  I was surprised that I didn’t really get a gap at all.  But, my jump is pitiful, I know just how pitiful now.  But, like I said I didn’t want to be racing for 3rd, so I kept pulling.  I cut the lead to less than half and then, as luck would have it, Michael flatted right before the finish climb.  He actually got to the top of the climb before the field and ended up riding my rear 11 speed Shimano wheel the rest of the race.

We caught Janne pretty quickly and then it was all back together.  There were about 35 guys left in the field then out of maybe 60 starters.  By then there were only 3 laps to go out of 11.  When Micheal flatted, his team mate, Garrick Valverde went pretty hard up the finish climb and I realized that I wasn’t going to be able to ride with him at that speed at the finish.  I know my uphill speed right now, trying to sprint, and it isn’t close to being able to win the race.  Normally, this would have been a super finish for me, but not now.  I hope to get that back into my arsenal soon.

So, I started thinking about the finish.  I was feeling pretty good I thought I could start the sprint at the very front of the field and probably hold on for somewhere between 4-10.  That was best case scenario.   That would be okay, but I like to race offensively and thought I’d rather just try to put myself in a chance to win.

So with a little over a lap to go, I jumped out of the field alone on a suicide-type move, and got a pretty good gap heading up the finish hill.  The hill is only about 35 seconds long, but steep at the top.  I looked back and had maybe 10 seconds, but right then Kent Woermann, another Olathe Subaru rider, came by.  He put a little gap on me over the top of the climb, heading out downhill for the last lap.

I had to jump again pretty hard to get back on, even though I think he waited a little, and he proceeded to take a huge pull, I mean huge pull.  We kept a pretty good gap to the back climb and by then I came by and pulled the climb.  I looked back with about half a lap to go and realized it was going to be close, maybe.

When we got to the bottom road, about a little over a mile to go, one other guy bridged up.  He took a pretty good pull, then Kent, but the field was flying.  We got caught maybe 300 meters from the bottom of the climb.  I punched in about 5 guys back, but soon realized I was going to be toast.  I already was.  I made a half effort starting up the first pitch and then shifted into my small ring and just rode to the finish.

I was close enough to get to watch the sprint.  Garrick Valverde held off Lee Bumgarner, then Flyover Series leader, Brandon Krawczyk, from Wisconsin was 3rd.  It’s nice that the guys I race with locally can still win when there are a bunch of out of state guys racing too.

I can’t be too disappointed with the effort.  I’ve finished top ten in races 100’s, if not 1000’s of times.  I race bikes trying to win bike races.  That is what I tried to do.  I got in a few pretty good efforts and felt descent enough, so it was a good day for me.

Today we race around the Sports complex, where the Chiefs and Royals play.  It’s a 4 corner criterium, a new course.  That is at 2.  When that is over, we’re driving back to Topeka, grabbing our MTB bikes and extra stuff and heading out to Vail for a week.  My friend Stacey, from Louisville, has rented a place out there.  Vincent, from Arvada is coming up too, so it should be fun.

I’m looking forward to getting out of the Kansas allergies for a little bit and see if I can get feeling better riding.  It is going to be a long day, considering it’s over 600 miles to Vail, with such a late start.  But, waking up tomorrow morning in the mountains will make today worth it. 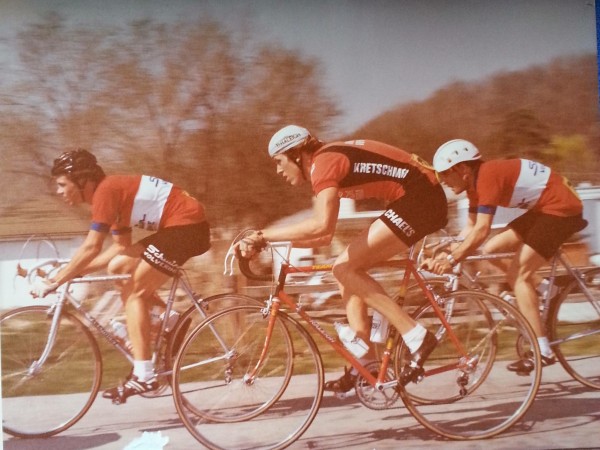 A woman, from way back in the day, Janet Friedrich, brought me this picture to the race to sign. It is of the Tour of Kansas City, probably form 1979. In front of me is Jeff Pierce, stage winner of the Tour de France in 1987. 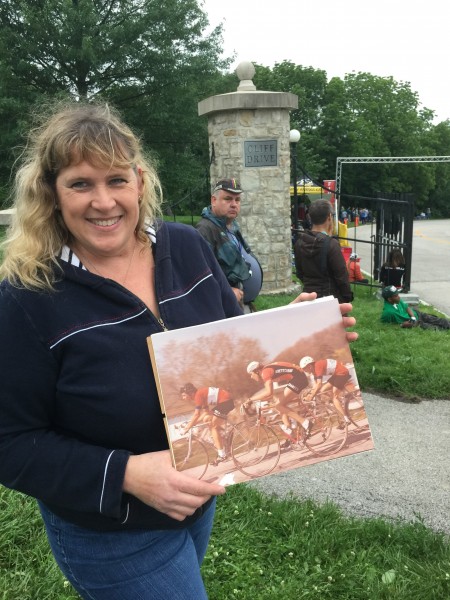 Here is Janet with the photo. 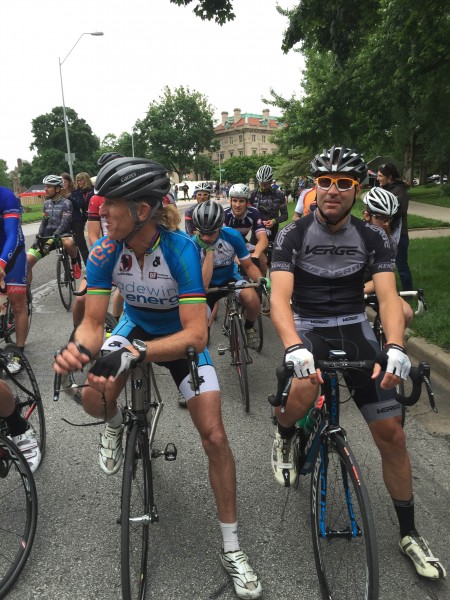 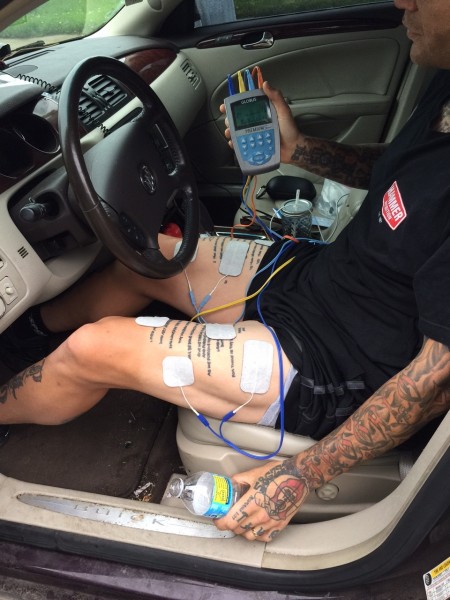 I met this guy, Cole, from Montana, that was warming up with some electrical stimulation. It is from Hammer. We talked about it for awhile. Seems like it might work. 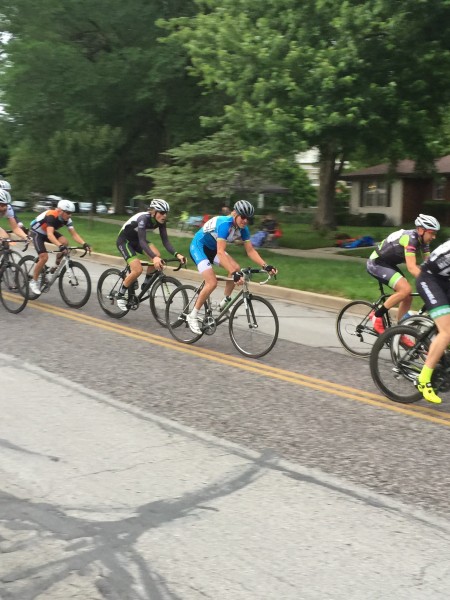 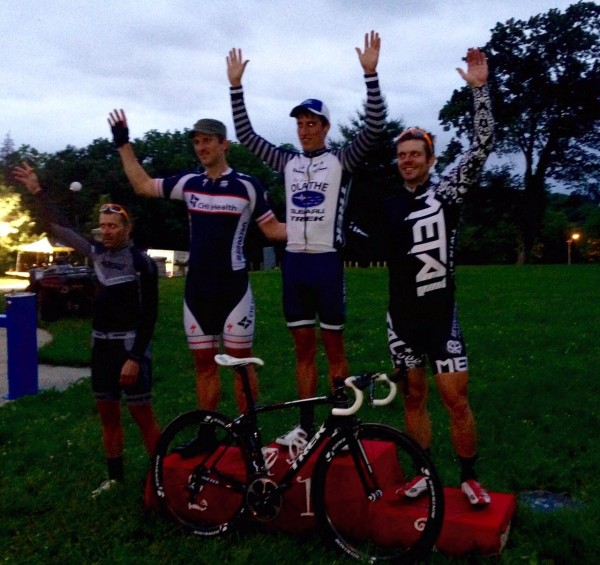 Podium. Garrick on top, the Lee and Brandon. Shadd Smith on the left for 4th. 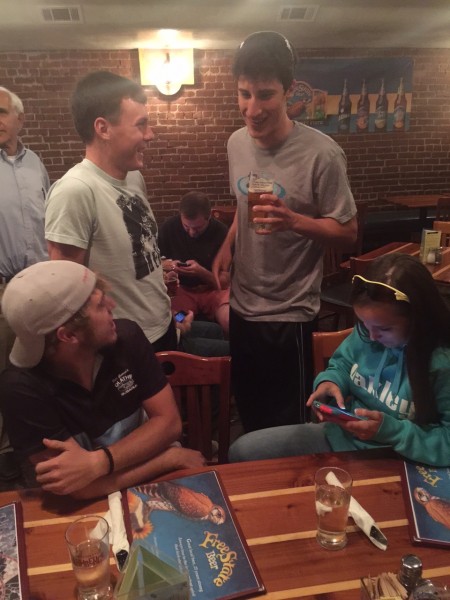 We met up with a bunch of people at Freestate Brewery, in Lawrence. Joseph Schmalz, who just finished Tour of California an Pro Nationals was there telling how those races went. He is on the left, talking to Garrick Valverde, Cliff Drive winner. (Bad boy Garrick, drinking beer during a stage race.) 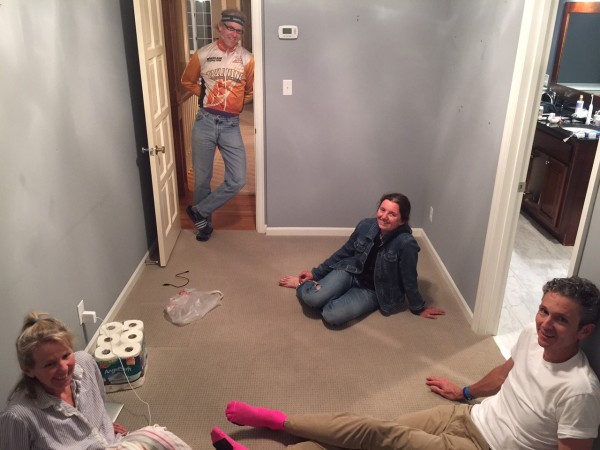 We didn’t get back to Topeka until close to midnight and drove by the Keith and Catherine Walberg’s new house to see if there were any lights on. They flew in yesterday afternoon. The lights were on, so we stopped and said hi. They have no furniture for a week, so we ended up in this little room for some reason. 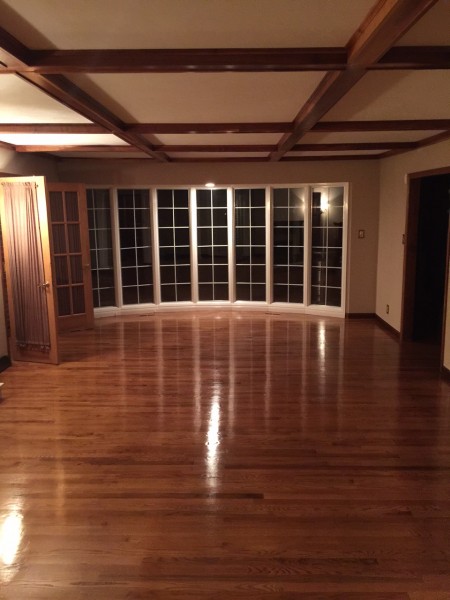 Their new house is just a couple blocks from mine and seems pretty huge empty. 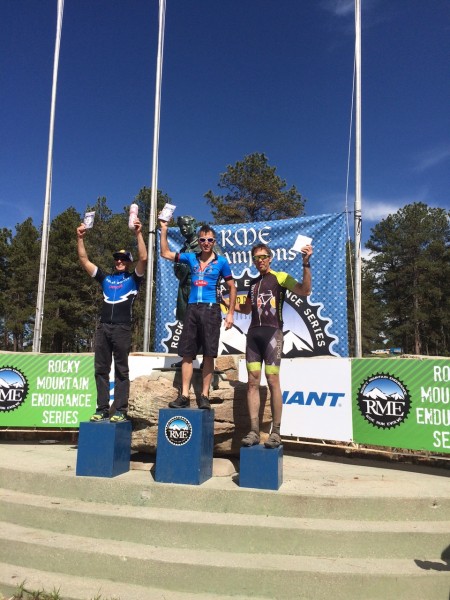 My friend, Vincent Davis, also won yesterday. A 50 mile MTB race in Colorado. It might be hard keeping up with him there with little oxygen.