Yesterday was surprising in a lot of respects.  At least surprising for me personally.  I woke up after a bad nights sleep.  I was feeling pretty crummy and wasn’t looking forward to racing a hard, hot criterium.

But, that changed after I went out late in the morning to ride an hour to get my legs  woken up. I felt pretty great, like really great riding.  It was pretty windy and when I was riding back along the Mississippi River, nearly directly into the wind, I was going consistently over 20 mph without really trying.  That changed my mindset completely.

So, all of a sudden I started thinking of the race as a race instead of a survival/training day.  I really didn’t warm-up at all.  I rode down the hill a little over a mile and then a couple laps of the course and that was it.  It was going to be hot, at least hot compared to what I was used to, in the mid 80’s.  Plus, it was tailwind up the climb, which makes it just that much hotter.

The course is a little under a mile and is pretty much 1/2 up, with tailwind and then a headwind descent into a couple tight corners.  Then start all over again.

I didn’t warm-up because I’ve found that if I ride earlier, I can start fine, plus I wanted to keep my core temperature low.  There is no reason to be hot before a endurance sporting event.

I was called to the line, so didn’t have to mess with the rushing the line.  The race started super tame and pretty much stayed that way.  A few guys took off after a couple laps, but they never really got too far ahead.

I was feeling great.  I don’t think I am riding great, but feeling great makes riding uphill a lot easier.   I could pretty much move around at will.  I could tell after a few laps that a lot of guys were suffering towards the top of the climb.

Then a disaster.  The headwind made the descent pretty neutralized since no one really wanted to put in a lot of power at the front when everyone else was coasting behind them.  So it got bunched up at the bottom corner.

After about 11 laps, I was in towards the front, but sandwiched on both sides, when the guys taking the inside line swung a little wide, thus squeezing the outside line into the curb.  And that was it.  Someone fell and chaos.  A couple guys hit the curb pretty hard and I had a guy lying right in front of me.  I skidded into him, but didn’t flip.  Then a couple guys ran into me from behind and I did a tommy type tip over, but didn’t hit the pavement.

I was stuck and was a little worried about the guy I’d run into.  He didn’t look so good.  I asked him if he thought he was okay and he said he was just stuck at the bottom of the pile.  He sounded alright. I casually checked my wheels and made my way over to the finish stretch to take a free lap.

This is when it turned south.  I rode past the start/finish line and the official said I was done, along with about 10 other guys.  He said there wasn’t a free lap.  I was thinking, WTF?  I didn’t hear the head official announce at the start that there wouldn’t be a free lap.  I was staying with Tom Schuler, the race director and couldn’t imagine that he wouldn’t have a free lap on a course such as this.  It was less just a tad less that a mile around, with lots of places when people could have a mechanical and crash, obviously.

So, I just rode over to the house that Jeff Bradley’s team was using as a viewing area, sat in the shade and had a beer.  As luck would have it, Tom Schuler was there and I asked him why he didn’t have any free laps.  His flippant reply was, “For what, a mechanical?”  I just glared at him for a few seconds and walked away.  I knew that nothing that would be coming out of my mouth would have been appropriate for the situation.

Tom was a Pro, won the US Pro Road Championships, was on the 1980 Olympic Team, and even won Athens Twilight and Sommerville.  I wonder how many free laps he’s taken in his career? He knows good and well what a free lap is for.   Crashing in bike races is part of the deal and the free lap rule makes it so riders that have mishaps can still finish the race.  I’d like to hear Tom’s real explanation for not having one.

I was disappointed because I wanted to finish the race.  I wanted the race miles and efforts in the heat.  And I wanted to test myself against those guys when I could actually pedal good.  And I didn’t get to.  I only rode 30 minutes.

The field was already pretty small, about half of the 80-90 starters.  I could see by the faces of many of the guys still racing that they were suffering on the climb, in the heat.   And the field started dragging.

About the time I crashed, Grant Erhard, a young rider from St. Louis, took off on a nearly race winning move.  He soled the next hour, only to be caught a couple laps from the finish.  I know Grant from an early season road race last year, Froze Toes, where he outsprinted me for the win.  He was riding pretty good then and much better now.  He deserved to win the race, the field was so done, but that didn’t work out.

3 guys caught him and then spit him out the back with just a couple miles to go.  Josh Johnson, Bissell, ended up winning the sprint and the race.  Grant dragged in for a respectable fourth.

I didn’t really talk to any of the riders that finished after the race.  I would have liked to know if it just got so hot or the hill just got that much harder the last half of the race.  Everyone looked pretty beat.

The race is very good.  The spectators are there, and great.  Lots of house parties.  The course is fantastic, if you like hard criteriums, which I do.  It has an old time bike race feeling, which is refreshing.

All that is good, I’ve still never finished the new Quad Cities Criterium in Davenport.  I’ve paid $100 in entry and have ridden 10 or 11 laps.  That is about $10 a lap.  Plus, a broken hip, so I’d have to say that this hasn’t been my luckiest race.

At least I was feeling good.  I didn’t have a super amount of power, but feeling good is better than not.  And I’m not hurt, which is great.  Overall, the weekend went alright.  I wish I would have raced Muscatine now.  Saving energy isn’t what I needed to do.  I need race miles.

We packed up and drove the 6 hours back to Topeka.  It was storming the whole way back. Crazy lightening and heavy rain.  We got back around 2 am.  Man, the midwest has been getting pummeled this spring.  It is supposed to rain Thursday thru Saturday this week.  I hope, for Brian Jensen’s sake, that it isn’t raining on Saturday.  Saturday is Dirty Kanza and riding 200 miles on gravel, in the rain could be a nightmare.

The Tour of Kansas City starts Friday too.  This is the 51th year of this race.  It is a three day stage race, with a time trial on Friday night and then a hard circuit race on Saturday and a criterium on Sunday.    Raining for Cliff Drive on Saturday might be a challenge.  The course is great, but not so good in the rain.  There is one corner that is hard to get around when it is dry.

Okay, I need to get on to house painting now, while it’s dry. 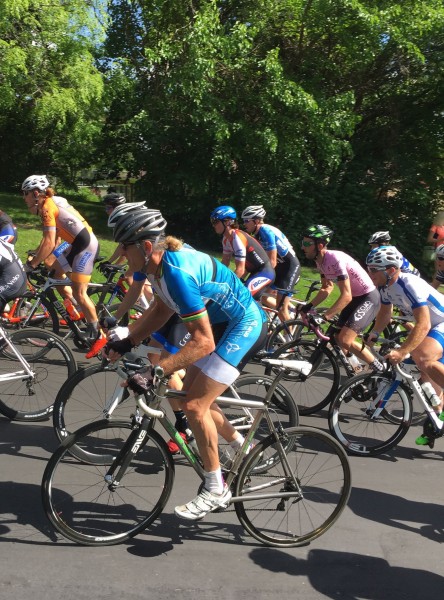 I never got stressed during the 30 minutes I rode. 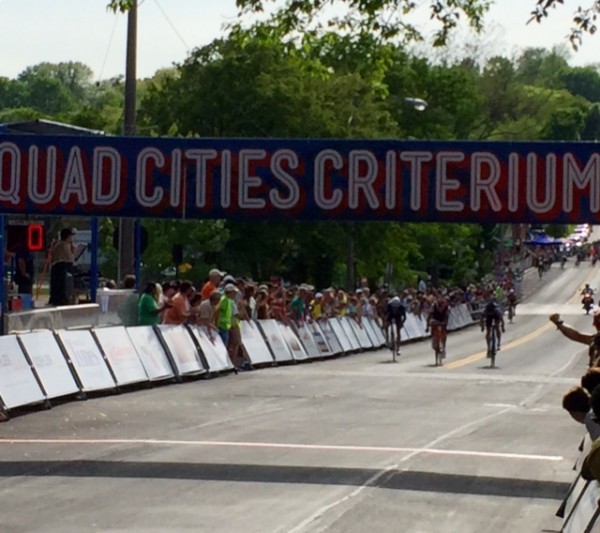 The sprint was pretty close before the line. 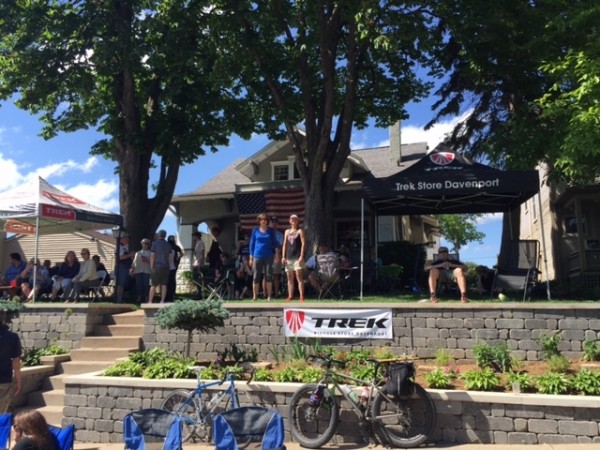 Jeff Bradley’s Trek shop’s hangout. Dennis is comfortable in the chair in the shade. 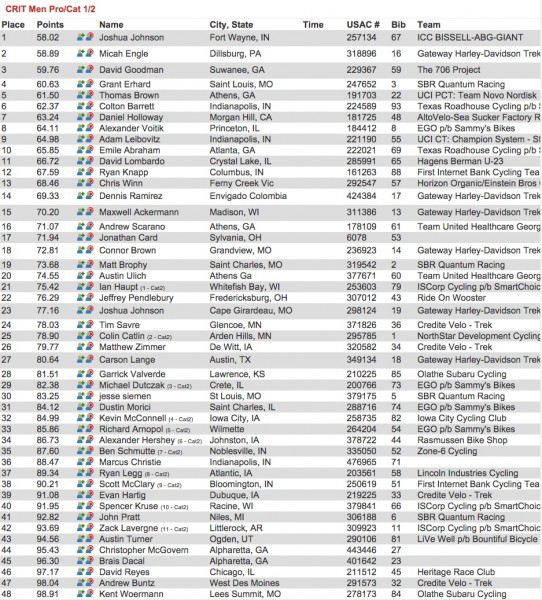 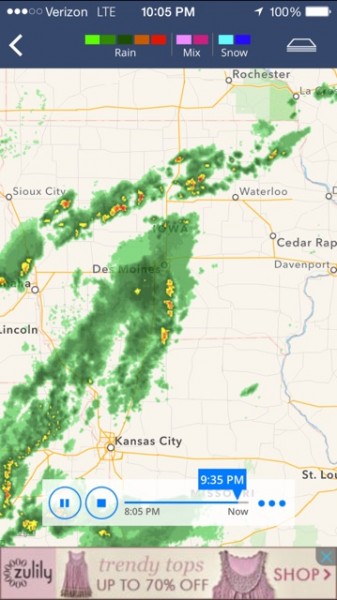 This was pretty much the whole drive back. 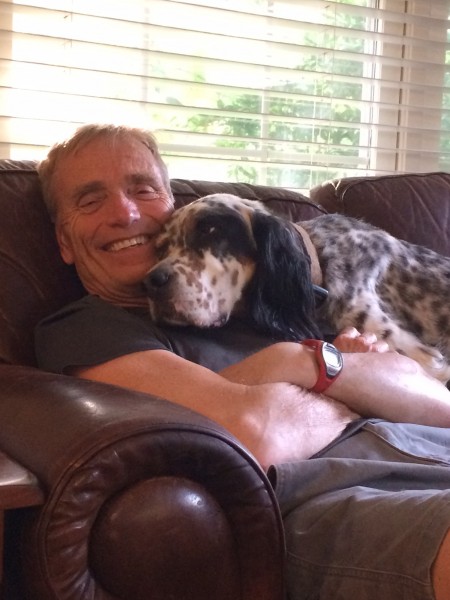 It’s Dennis Kruse’s birthday today. He is 70. Here he is with Hawkeye yesterday.