I’ve written a few posts about how the “Gatorade Effect” is engrained in all athlete’s brains.  I’ve heard Paul Sherwin say, while commentating, that a cyclist loses crazy power, up to 5% power for every 1% of body weight lose.  I knew that number was just plain wrong.

I don’t drink much.  Never have.  Lots of times it on purpose.  Losing water weight is losing weight.  It doesn’t matter whether it is fat or water, one pound is one pound.

Now there is a study, although a small one (just 11 guys), that shows that losing up to 3% body weight doesn’t affect athletic performance at all. Nothing.  Here is a link to the abstract.

The study was using 11 riders and they hooked up IV bags to the riders.  Some of the bags were real and kept the riders hydrated and others were fake, not rehydrating the riders at all.  They did this for psychological purposes.

They found out that there was no difference of power production with weight lose due to dehydration.  That goes against everything we’ve been taught the last 30 years.

I’ve done my own experiments and have never had any positive results over hydrating.  One year at the Professional Road Nationals in Philadelphia, we were staying in a nice hotel, right off the course.  The hotel had a scale in the bathroom.  I weighed myself right before leaving the room for the 160 mile road race.  I was 158 lbs.  It was super hot, in the 90’s and the same for the humidity.

I took bottles each lap, which was 10 miles and at the end, the last 10 miles of the race were the fastest of the day.  I felt great at the end, easily riding over 30 mph in the field.  So, I could produce normal power.  I did okay, don’t remember exactly, but was feeling super after 6 hours.

I’m sure I drank some cold bottles after, maybe a beer or two.  When I got back to the hotel room, I was 13 lbs light.  I weighed 145 lbs.  That is over a gallon and a half of water weight.  And I was riding fine at the end.  According to Paul Sherwin, I shouldn’t have been able to produce any wattage at all.

The same happened during MTB races.  When the USOC was trying to figure out the right cut off number for hematocrit, they came to MTB races and did a lot of testing.  Most of the riders were losing about 6-8 pounds of weight in a 2 1/2 hour MTB race.  And we could all produce power at the end.

Marathon runners don’t drink much either while running.  When they are grabbing those little Dixie cups, they aren’t getting much liquid into their bodies.  Actually, a study of marathon runners in France in 2009 showed that athletes who lost a higher percentage of body weight through dehydration ran faster than those that lost less.

I’d like to see more studies like this.  I go by the practice when you’re thirsty, drink.  This is how all the rest of the animals on the planet do it.  Not sure why it would be any different for us. 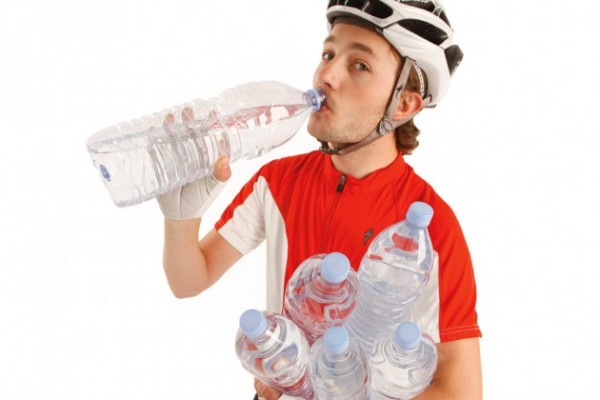 20 thoughts on “Dehydration Isn’t So Bad in Athletics”