I’ve woke up the last two morning with a pretty serious headache.  I don’t get headaches much and feel really sorry for anyone that gets them often.

I’m not sure why I do it when I know the consequences.  I guess I don’t take the next morning into consideration the night before.

The last couple days haven’t been all that great.

First, Bromont isn’t doing very well.  Actually, he’s doing pretty badly. I was hoping that he would feel better after getting some new red blood cells, but it didn’t seem to help him at all.

Nothing seems to go right when I’m dwelling on Bromont.  I decided I should do some manual labor to take my mind off of him, so I went to a rental center to get a big trailer to haul a bunch of vegetation.  It took forever for a new girl at the rental place to check me out.  I went around to get the trailer and the wire for the 4 hole light hookup wouldn’t reach to my tow hitch eletrical.  I have a 7 prong outlet and had bought a adaptor to allow a 4 hole plug to work.  The guys that were hooking it up said they would look for an extention to connect the 3 feet.

They came back and said I had to buy one from them for $10.  I told they I wouldn’t.  Seems like that should be part of the rental.  They sent me inside.  Inside, I talked to the owner.  He told me that “they” used to loan them, but that no one returned them, so “they” just started selling them.  I told him I’d return it and that if I didn’t they could just take it from the deposit.  He said no, that isn’t how they do it anymore.  I asked him why he was using the word they?  I knew he owned the business.  He didn’t answer.  I figured I’d go to an auto parts store and buy one.  I didn’t want to give they guys my money.  So I left.

The owner followed me out and said that he didn’t think the trailer was going to work and proceeded to disconnect it.  I didn’t say a word to him, just let him proceed.  What a prick.   I am never rented any tools there again, and I rent a fair amount of tools.

So, I used a small trailer I have.  I had to mince the stuff, with a chainsaw, to fit it all into the smaller trailer, but did, which was the highlight of the day.  I guess I saved $75, but it was a lot more work.

I decided to go for a ride after that.  I got 4 miles from my house and flatted on some glass.  Then I proceeded to try to fix it with, what it seems now, two flat tubes.  I had to ride home on the flat.  I just left my bike in the garage, not messing with it.  I hope I didn’t hurt the rim much.

So then, I decided to go mow.  This was at about 7 pm and it gets dark here a little after 8.  Plus, it was supposed to start raining anytime.  I got done mowing two places and then went down to the building.  No one, me or Kris, hadn’t mowed there yet.  There were a fair amount of leaves, plus Sycamore balls, or pollen, or whatever you call it, all over.

It was like mowing in a dust bowl.  Dry leaves, pollen, etc. everywhere.  It was a mess and I could barely breathe.  About 1/2 way through, the mower quit working.  It was dark by then.  I took it over under the light and it looked like the gas tank, which is metal, had broken off the mower.  Something that I couldn’t fix quickly.  So, a half complete job.  I hate leaving a lawn half mowed.  It is like shoveling  half a driveway.  It must be something in my mind, but it drives me nuts.

I’m over it this morning.  It rained all night, pretty hard, so I’m not finishing it today anyway.

There are lots of places I’d rather be right now.  There are at least three different races, Joe Martin, which is just down the street, The Whiskey 50 MTB race and the Belgian Waffle Ride, North of San Diego, that I’d like to be doing this weekend.  But, I’m home.

It is pretty stressful taking care of a dying animal.  Especially a dog that has been with you for a long time.  I can’t think of many things worse to do.  But, I can’t imagine doing anything else.  It is exactly where I’m supposed to be, no matter how much tension it causes.  We are best friends and it is my place to help him through this.

I do hope today goes a little smoother though. 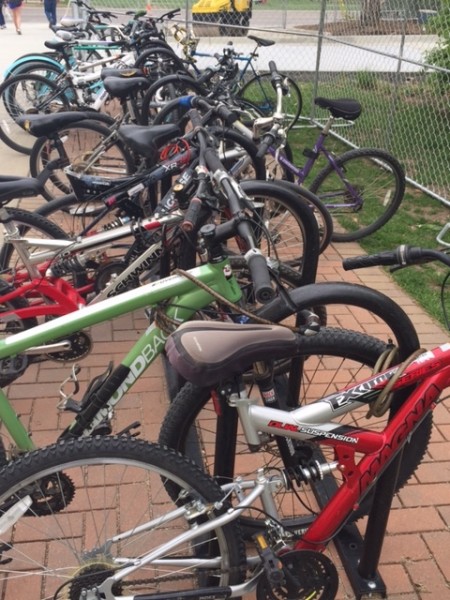 I know this doesn’t have anything to do with this post, but I was stunned by how shitty the bikes were, at every bike rack, on the K-State campus. I had no idea this was the case.