This is the statement by Dr. Joseph Maroon, a board certified clinical professor of neurological surgery at the University of Pittsburgh Medical Center, the Pittsburg Steelers’ team neurosurgeon and also a consultant to the NFL’s head, neck and spine committee.

Okay, this guy is an idiot.

This all started because of a NFL player, Chris Borland, who was 24, played one season in the NFL and suddenly announced his retirement from the sport.  He did this after researching brain trauma and realizing that he would have a very, very high chance of being a babbling idiot if he kept playing a whole career.

He really didn’t have to look too far.  Just Google CTE and the studies are there.  76 out of 79 NFL players, that they have brain tissue looked at, after they died, have CTE, a degenerative brain disease.  And it is nearly, but not quite, as bad if you just played football through high school and in college.  101 out of 128, or 80%, had CTE.

So, Chris was a brave soul.  He walked away from a multi-million dollar contract so he could, hopefully, keep more of his brain function.  By the results of the study, he still has a pretty high chance of having CTE, but his odds of it being live changing has to be less, now that he has quit.

For an NFL spokesman to try to compare their sports danger, which is pretty much a guarantee, to our sport, is ridiculous.

If I were a parent, I would never consider letting my child do a sport that is going to cause lots and lots of micro-concussions.

Check out the photo below and see the photo of the brain after CTE.  I very much doubt that looks like a professional cyclists’ brain after he ends his career, let alone and small child that has fallen off his bike or skateboard a few times.

Chris Borland is a brave man and a true leader, while Dr. Maroon should be ashamed of himself for misleading the general public. 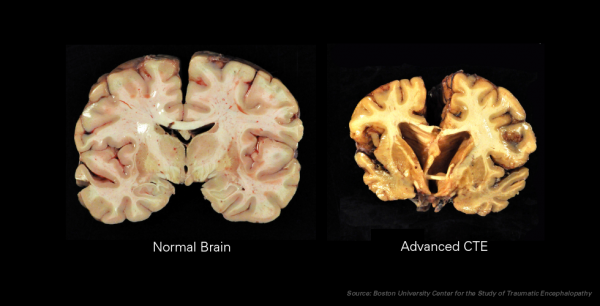 34 thoughts on ““Riding a Bike is More Dangerous than Football””