Tom Meeusen, Telenet-Fidea, along with Bart Wellens, and U23 Worlds favorite, Laurens Sweeck, have been Deemed ineligible to ride the World Cyclocross Championships in Tabor Czech Republic, at the end of the month.  The Belgian Federation did this.

It all goes back to an investigation of a Belgian doctor, Chris Merlens, in which these guys are accused of manipulating their blood by withdrawing it and using ozone to treat it.  One rider has already been suspended for 2 years from the investigation.

Anyway, Cyclingnews has an article today titled “Meeusen to take legal action after Worlds exclusion.”  I read the article and I’ll bet you just about anything he doesn’t.  I suppose that he team could sue someone over the exclusion, but Tom Meeusen isn’t going to be suing anyone personally.

I don’t don’t personally know Tom Meeusen.  So, I have no personal knowledge, at all, about the situation.  I say this because of the answers the guy gave for the Cyclingnews story.

Not once did he say that he didn’t do it.  Not once did he seem outraged or like an injustice had been carried out against him.  It takes a guy like Lance, someone with a ton of arrogance, to file legal against someone else when they know they are guilty.  I don’t think that is Meeusen.

Like I said above, he never states his innocence.  Tries to but actually sort of admits guilt.  He says, “I’ve been there for injections, that’s the only thing I might have done wrong.”

This is the 2nd time that he has been withdrawn from the Belgian World’s Team.  He didn’t get to compete in Louisville two years ago.  And he didn’t sue anyone then, even though he missed that race.

I think it is better not to threaten to do things that you have no intention of following through on.  I don’t think that posturing  is going to help him in this situation.   It only seems to get these guys into more trouble. 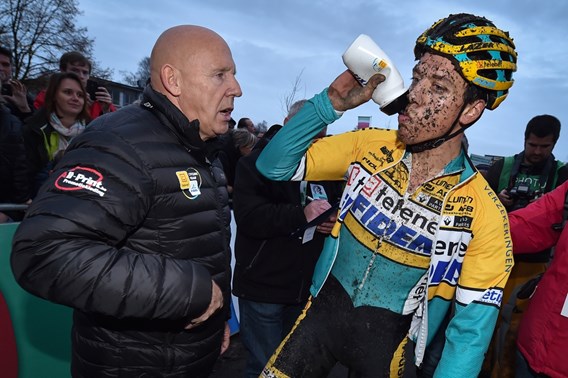 10 thoughts on “Tom Meeusen Suing to Ride Cross Worlds? I Bet Not”