I’ve been called a lot of things in my life, but never a curmudgeon. That is what the title of an article in the new Velonews about me is titled.  (I can’t seem to call Velo by any other name than Velonews.)   I don’t think it is really a very complimentary word, but I don’t really mind it so much now, I guess.

Chris Case, managing editor of Velo,  called me about a month ago and talked to me for a little while.  I’ve done a ton of interviews in my lifetime and I can usually tell what the article is going to be like, but in this instance, I didn’t have a clue.  His questions were all over the place, as were my answers, which isn’t abnormal for me.

There is a reason that Chris is the managing editor of a magazine.  It’s because he is very good at what he does.  I’ve never been very good at writing, or any subjective subject really, and it always amazes me when I run into someone that it must come easy to.  Plus, the guy is a very good bike rider, which I didn’t realize.  He finished 14th, in the KOM Challenge, a grueling hillclimb in Taiwan, back in November.

A few people had sent me the title of the article and I had thought it might not be so complimentary.  It was very complimentary, nearly embarrassingly so.

They talked to Ned (Overend) and like usual, he just said a bunch of stuff which he thought sounded good.  No really, Ned is one of my best friends, even though he probably doesn’t realize it.   I enjoy talking to Ned about as much as anyone I know.  The guy is funnier than shit, a super dry sense of humor.  Plus, he is very observant of a lot of the same stuff as me, but he’s just “a tad” more politically correct to vocalize it publicly.   Ned is as in tune with his body as anyone I’ve ever met.  (Not that he’s conscious of it though.) He tends to do things that allow him to be successful athletically, as he’s aging.  He surprises me in this regard, because from observing him, you’d think he was a little lazy and uninterested in training, thus racing.  It is exactly opposite the case.  He’s very passionate about cycling and just doesn’t have enough time in the day, or his life, to do all that he wants.

Another surprising observation, at least for me, from the article, is that I never really imagine people talking about reading this website.  And the reason for the article was mainly the blog.  That is what it was initially all about.  Phil Gaimon is doing a little private editorial on each article in the issue and he said he gets links sent to him from friends.  He is mainly talking about posts I write about doping, I assume, and probably one I rant about something or another.  I can’t really imagine a bunch of guys riding along ,talking about something I wrote here.

I don’t know Phil, hardly at all, but he’s one of the good guys in the sport.  He’s just one degree of separation from me, in so many ways.  It is so strange that the guy can have such a phenomenal season and end up losing his Pro Tour contract.  The sport will be better off, and  Phil will be too, riding for Optum this season and not for Garmin.

The last surprise was the magazine itself.  I actually haven’t read a Velonews in a long time.  I haven’t even had one in my hand for the last few years.  It is so weird, because I have 100’s, probably close to a 1000, in my basement.  All the way back to the mid-70’s.  It used to be that every guy in town, that raced, subscribed.  I’m not sure I know someone that does now.  Anyway, I haven’t had a chance to read the whole magazine, but I’m looking forward to it.  What I have read, it is great.  Not the same stuff that’s on the Internet.  Way more in depth and interesting.   I was sort of surprised about how thin it was, only 64 pages.  I hope they are making enough ad money to be viable.  It is really America’s cyclings voice, in print.  I’m going to subscribe again.

I’m going to keep doing this until I don’t like it anymore, which is sort of the way I do all things that I have a choice upon doing.  I get a lot of personal interaction with people that I wouldn’t normally have the opportunity to encounter, which is great.  Sometimes it is a pain, but not usually.    Anyway, it is what it is.  Through this article, I learned a little what it means to others too. 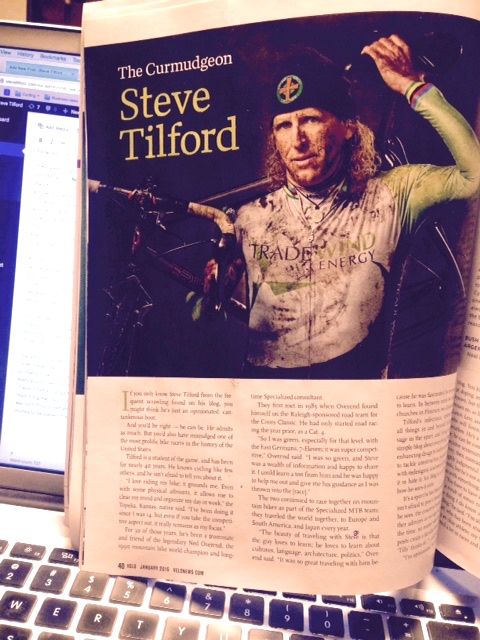 25 thoughts on “The Curmudgeon”