Bill has told me he has been doing planks on and off the past few months.  I’ve never done a plank, or had never done a plank before, but I do need to start doing some other stuff, core stuff, and I was a little interested about these plank things.

I heard that maybe they are good for the rotator cuff and mine is pitiful, so I thought I’d try it.  I’ve done it now, maybe 4 times.  I am very unfamiliar with what it is supposed to be doing or what gives out.  So, I did a little research trying to figure out what muscles it isolates.

Before looking, I really couldn’t figure out what would eventually fail.  After a couple minutes, my upper arms start shaking a little, but I can get that under control.  It seems like my lower back is the next weak point, but it doesn’t feel like it is just going to give, like when you’re doing pull-ups and you get to 13, then the 14th is impossible.

According to wiki, here are the muscle you are isolating.

Yesterday I did a plank for 5 minutes.  I had done it for 3 1/2 minutes the first couple times and stopped because I didn’t want to be really sore the next day.  I haven’t gotten sore at all yet.  I was going to stop at 4 minutes, it seemed like it was enough, but at 5 minutes, it didn’t seem any worse than at 4.  I’m not sure how long I could go, but it seems like a while longer.

According to the internet -The longest time in an abdominal plank position is 4 hours 26 minutes and was achieved by Mao Weidong (China) in Beijing, China on 26 September 2014.

I’m a little surprised that is so short.  It seems like if you could get to the point of doing the plank for an hour, then you could do it indefinitely.  I guess that isn’t the case.

The plank is just another spin on doing exercise.  I saw another article on the internet listing 5 exercises that are a waste of your time.  Of course, included on this list, sit-ups and push-ups.  I very much doubt that doing these are a “waste of your time”.

Any exercise, virtually every exercise in today’s society, isn’t a waste of time.  Hopefully it helps a rotator cuff, so I don’t have to pull out the Campbell soup cans or 2 lb weights. 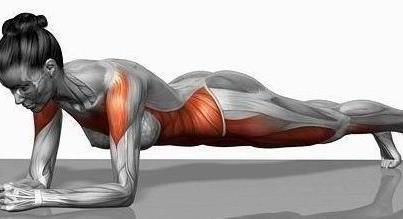 These are the muscles it uses. 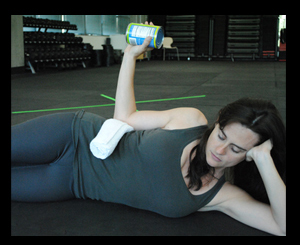 I’ve done this before. It is very unrewarding.