I’ve had a fair amount of experience renting tools in my life.  Not huge, but enough to realize the in-and-outs of the business.

And here’s the deal, don’t rent anything from a place that isn’t a tool rental business.  That means, skip Home Depot, and such, if at all possible.   Their tools usually cause more anxiety than the accomplishment of your task.

It’s not like the Home Depots of the world don’t have good tools to rent.  It is that they have no ability to keep the tools working properly.  Every tool I’ve ever rented from them, I repair before I can use it.  Plus, if it has a blade of any kind, the blade is always duller than shit.  Case in point.

I had to rent a sewer auger a couple of nights ago, later in the evening.  All the “real rental” places were closed, so Kris and I drove out to Home Depot to rent a one.  It was around $60 bucks for 4 hours.  We loaded the auger into the car and were back home and were at it pretty quickly.

But, that is when the fun started.  The tool was a POS.  The belt was so loose that the auger wouldn’t spin.  There was a way to move the motor up and down, to adjust the belt, but someone had screwed with the bolt and it wasn’t there, just some threads and a nut on them.

We finally got the thing sort of working, but when it was out around 80 feet in the sewer, the resistance was too much and it bogged down.  Eventually, we were having to spin the thing with our hands, propelling it manually.

The ordeal kept going.  It took forever to get the thing out of the clean out.  It was spinning so slowly, I was pretty much just yanking it out of the drain.  I was wasted.

I’ve used sewer augers lots of times with no problems.  This was a tool issue.

When I returned the thing I told the lady at the rental counter the issue.  She told me that it wasn’t an automatic auger and “of course” you have to use it manually.  I asked her what the motor was for then.  She looked at me quizzically, not understanding what I was saying.  I told her someone should look the tool over before she rented it again.   She put it back into its slot, waiting for the next idiot.

I rented the 1 inch model on the left.  Just wait until a real tool rental store is open if you can. 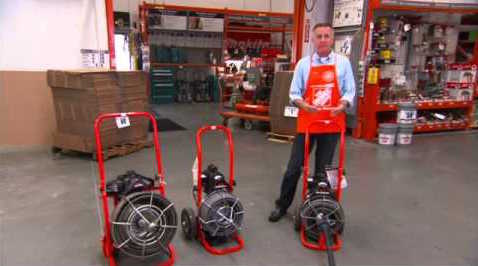